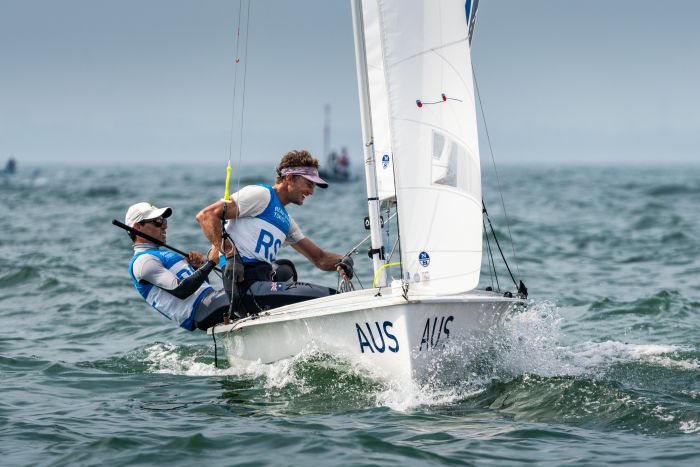 But, after a short postponement, all fleets managed to get out onto the water and complete at least one race each, with four days remaining to sail the rest of the series.

Compared to yesterday’s strong breeze and big waves, conditions today were quite different and required sailors to adapt in order to maintain consistency.

One team which has done this very well is the pairing of Charlotte Dobson & Saskia Tidey (GBR) in the 49erFX fleet. Their lowest result out of five races so far is a fourth, with two second places today to add to yesterday’s two wins. And the duo are unsurprisingly very satisfied with how they have managed the conditions so far.

“Today was lighter than yesterday with around 10 knots,” explained Tidey. “We were on the Kamakura course today and we had quite a left-handed racetrack to start with; we luckily got into the second race before it switched around to sea breeze.

“Today the sea state was a lot flatter – we had a bit of swell coming in, but nothing like yesterday. Yesterday was more about boat-handling and keeping the boat moving through the water.”

On their impressive start to Ready Steady Tokyo, which sees them lead by six points after five races, Tidey added, “We’re thrilled – it’s the way anyone would hope to start a regatta. We’ve got a long week ahead; we just have to keep our heads and keep going.”

Behind them in second are Martine Grael & Kahena Kunze (BRA), with Helene Naess & Marie Rønningen (NOR) moving into the top three. Both teams picked up a race win and a fifth place today.

Australia's Tess Loyd and Jaime Ryan are in sixth position after an up-and-down day of 15th, which becomes their drop, and a creditable third in the second race of the day..

The 49er fleet also managed to sail two races despite heading out later, which has changed the look of the top three.

Leading the way now are Lukasz Przybytek & Pawel Kolodzinski (POL) who, although they are yet to win a race so far, have notched some fairly consistent results.

Elsewhere, the Finn fleet was one of several only able to sail one race. In dying breeze, good race management was required to determine whether to start racing, wait on the water or postpone ashore.

“It was not easy to sail on our course, but I managed to stay in the middle and stay in the pressure,” he said. “I was managing the upwinds quite well. On both downwinds I lost a bit, because there was more of a pressure difference in the two sides, but still managed to finish well overall.

“For the second race we were waiting and hoping that some wind would come, but Luigi Reggio made a good call and sent us back to shore because it wouldn’t be a fair race. I’m really happy with how things are going so far. I think we are well-prepared for this regatta, so I’m looking forward to the next few days.”

Over in the Nacra 17, Ruggero Tita & Caterina Banti (ITA) maintain their advantage; their lowest result is a third out of five races. Ben Saxton and Nikki Bonniface (GBR) follow six points behind in second, with Santiago Lange and Cecilia Carranza Saroli (ARG) in third courtesy of a race win.

Maria Erdi (HUN) keeps her lead in the Laser Radial fleet, despite finishing 35th in the only race of the day, which now becomes her discard. Nearest challengers Marit Bouwmeester (NED) and Anne-Marie Rindom (DEN) also recorded results out of the top 10, coming 23rd and 14th respectively. Viktorija Andrulyte (LTU) secured the victory in that solitary race.

There was only one race sailed in the Laser fleet, too, with Chris Barnard (USA) claiming the win. Fleet leader Sam Meech (NZL) is one point ahead of new top-three entry Hermann Tomasgaard (NOR), with Jean Baptiste Bernaz (FRA) finishing 25th but discarding that to keep third.

Australia has two sailors in the Laser fleet, locked in an enthralling duel to win the nomination for Tokyo. Rio Olympic champion and recent world championship winner Tom Burton trails team mate Matt Wearn by three points. They sit fifth and sixth in the fleet.

Another race win for Yunxiu Lu (CHN) keeps her top of the RS:X Women’s fleet, as she discards her eighth-place finish from today. Charline Picon (FRA) is up to second, with Maja Dziarnowska (POL) dropping to third. Marta Maggetti (ITA) picked up the day’s other race win.

The 470 Men’s top three stays exactly the same after one race overall today; Jordi Xammar and Nicolas Rodriguez (ESP) lead Mat Belcher and Will Ryan (AUS) and Anton Dahlberg and Fredrik Bergström (SWE), although it was Geison Mendes and Gustavo Thiesen (BRA) who won that race.

Racing continues tomorrow, with all fleets departing at around 12:00 local time. All are scheduled to sail three races, apart from the 49er, 49erFX and Nacra 17 fleets, which will sail four.