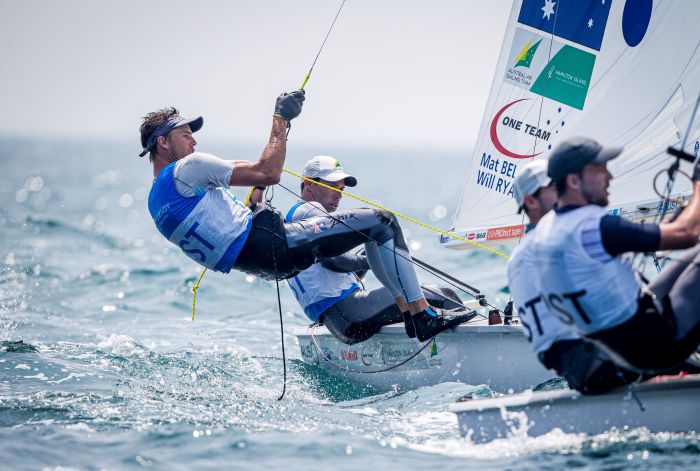 As Ready Steady Tokyo – Sailing, the official test event for Tokyo 2020, reaches its mid-way point, it’s fair to say that all 353 athletes here have been put through their paces so far.

Day 3 produced a different bout of weather to the previous two days, with shifting winds and tricky conditions shaking up the standings somewhat. The variety of racing scenarios faced by the sailors will provide them with plenty of experience for the Tokyo 2020 Olympic Games in one year’s time; the old regatta adage of “consistency is key” certainly applies here.

One team who have demonstrated this with a typically professional performance so far are reigning Nacra 17 Olympic champions, Santiago Lange and Cecilia Carranza Saroli (ARG). They won two of today’s four races to move up into second place, also picking up a fourth and a 12th (discarded). And though Lange was disappointed to finish the day with their worst result of the week, he believes they have both taken a lot out of a varied three days of racing.

“It was a really difficult day – really tiring for an old man!” he said. “It’s a shame we ruined the day a bit in the last race, but overall we are happy; we sailed well with some really good racing. It seems like sailing in Japan is about getting used to difficult conditions and performing.

“Today we were expecting the wind to die to a sea breeze, but actually the last race was in some of the strongest winds. We need to be really focused to understand what the wind does every day, so we learn something for next year.”

Rio silver medallists Jason Waterhouse and Lisa Darmanin (AUS) had a very consistent day with a scorecard of 4, 3, 3, 4 to move into fourth place overall.

There’s a new leader in the Laser fleet; Jesper Stalheim (SWE) has risen to the top with a string of consistent results. Picking up two seconds and a third today, and with his discard a 15th from earlier in the week, he’s knocked Sam Meech (NZL) off top spot.

Assessing the week’s mixed conditions, and up against a strong fleet, Stalheim knows it will be difficult to maintain his good form so far.

“Apart from a bit of a shocker in the second race, I’ve had a really good week,” he said. “We’ve had a bit of everything. Today we had a shifty offshore wind, whereas on the first day we had epic southwest winds and big waves. It looks like there will be two more light wind days coming up, so we’ll see what they get!

“Both of the Aussies and Sam [Meech] have been quite consistent so far. They’re really strong – they’ve been the strongest throughout this season. It will be hard to keep them behind me, but I’ll try my best!”

The Swede has a nine-point lead over Meech, who won one of today’s three races, with Matt Wearn (AUS) in third and Rio champion Tom Burton (AUS) two points further back in fourth.

William De Smet (BEL) and Chris Barnard (USA) won the other two races of the day.

In the Laser Radial fleet, a 32nd-placed finish for Maria Erdi (HUN) sees her lose her lead, as she already has a discard of 35th from yesterday. Emma Plasschaert (BEL) now leads the way, ahead of Sarah Douglas (CAN), who won one of today’s races to move up into second. Marit Bouwmeester (NED) and Svenja Weger (GER) picked up the other race wins.

Australian brothers Sam and Will Phillips were one of four crews to suffer a UFD, dropping them to 14th place with three races remaining.

The 49erFX fleet now have nine races under their belt after also completing another four today, and Charlotte Dobson & Saskia Tidey (GBR) keep their lead, topping off with a win to build a 10-point advantage. Martine Grael & Kahena Kunze (BRA) stay second, with Alexandra Maloney & Molly Meech moving into the top three having collected a race win today. The day’s other two victories were taken by Helene Nass & Marie Ronningen (NOR) and Tamara Echegoyen & Paula Barcelo (ESP).

Tess Loyd and Jaime Ryan had a 20th in the last race, which becomes their discard, ut they remain firmly in the top 10, in seventh position overall.

Yunxiu Lu (CHN) continues to dominate in the RS:X Women, with a 12-point lead over second-placed Katy Spychakov (ISR), who won the last of three races. Charline Picon (FRA) moves down into third, while Stefania Elfutina (RUS) took two victories today to move within a point of her in fourth.

And on Day 3 of racing in the Finn fleet, Zsombor Berecz (HUN) is back in front ahead of Giles Scott (GBR), with a race win taking him nine points clear of the Brit. Andy Maloney (NZL) triumphed in the day’s other two races and he is now within two points of third-placed Nicholas Heiner (NED).

By Liz Owen – World Sailing, with additional material from Mysailing.