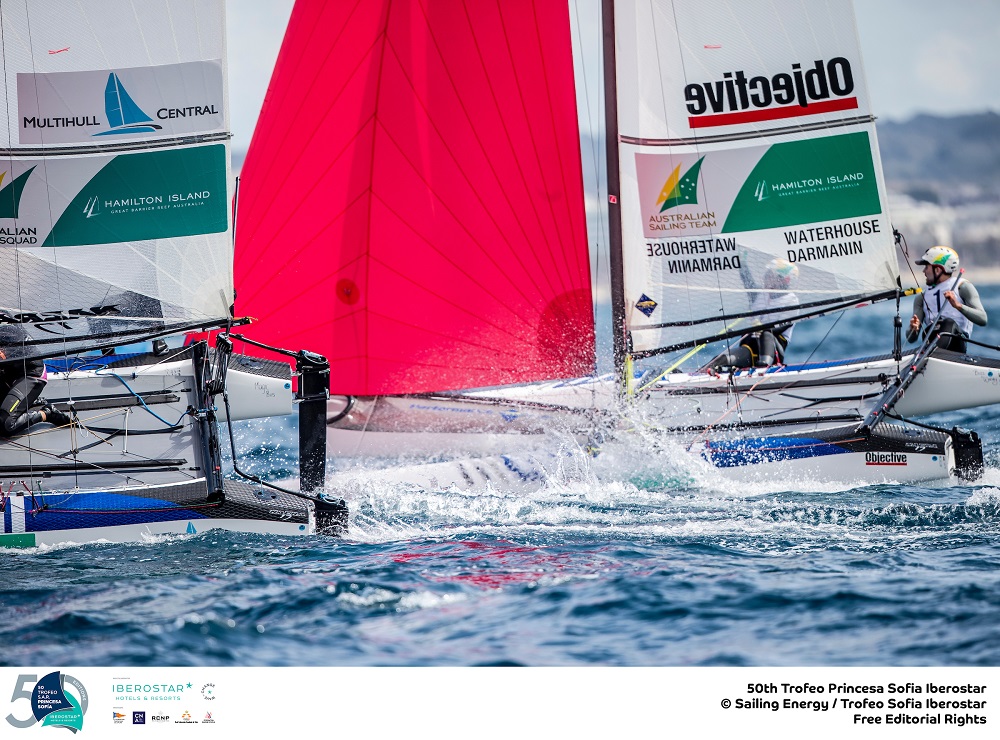 Jason Waterhouse and Lisa Darmanin - Australia's hopes in the Nacra 17

Taking place from 15-22 August at Enoshima Yacht Harbour, the official Tokyo 2020 Olympic Sailing venue, is Ready Steady Tokyo, the official test event for the Games in one year’s time.

And if the last two Olympic Games are anything to go by, this week will be a good indicator of how the medal challengers will fare in one year’s time.

At Rio 2016, 13 sets of medallists at the Test Event went on to claim glory at the Games, with 18 replicating podium positions in 2011 and 2012 at the London Olympiad.

Out of those 21 individual sailors involved in 2015 and 2016, 17 of them will line up at Ready Steady Tokyo eyeing similar results, including six who achieved the impressive feat of winning Gold at both.

Overall, 30 individual medallists from Rio 2016, as well as an additional 11 from London 2012, are amongst the 363 sailors competing at Ready Steady Tokyo. With only a small percentage already confirmed for next year’s Games, the stakes are high on the road to Tokyo 2020, and this week’s test event will play a big part in the decisions made before next year.

But it’s not just the sailors using this week to test proceedings ahead of 2020. Ready Steady Tokyo will be a perfect opportunity for World Sailing and Tokyo 2020 to finalise their planning for the Olympic Games next year.

It also provides a great opportunity for the race management team to test the field of play that will be used at the Games – and all of the Chief Officials appointed to Tokyo 2020 are here too.

The Tokyo 2020 Organising Committee will also use this week as preparation for their national officials and volunteers who will be assisting at the Games, with media operations and overall technology – such as tracking, scoring and communication flows – also put to the test.

Olympic Champions in the Finn – Giles Scott (GBR) – and the 49erFX – Martine Grael/Kahena Kunze (BRA) – prepared for the 2016 Games in the best possible manner by winning the test event in 2015. Grael/Kunze will also be seeking two consecutive Hempel World Cup Series victories here in Enoshima after Ready Steady Tokyo concludes.

Two of the most successful sailors here are Peter Burling/Blair Tuke (NZL). They claimed 49er gold at Rio 2016 as well as the 2015 test event, and were also stand-out performers with a bronze medal at the 2011 test event, going on to win silver at London 2012.

And Charline Picon (FRA), defending champion in the RS:X Women’s fleet, will be keen to replicate her 2015 preparation of winning gold. Unlike the others, she has already officially confirmed her spot at Tokyo 2020 for her country.

2020 will see a new Olympic champion in the Men’s 470 as 2016 gold medallist Sime Fantela (CRO) switched to the 49er with brother Mihovil last year.

Mat Belcher/Will Ryan (AUS), who won Gold at the 2015 Test Eventand Silver at the 2016 Games, became 2019 World Champions on these very waters earlier this month. However, breathing down their necks were Jordi Xammar/Nicolas Rodriguez (ESP) and Anton Dahlberg/Fredrik Bergström (SWE), so Ready Steady Tokyo will see a fierce fight between them all.

Elsewhere, Hannah Mills (GBR), who won silver at London 2012 and gold at Rio 2016 with Saskia Clark in the 470 Women, will be entering her third Olympic Test Event with a different crew. Having claimed silver with Clark at both the 2015 and 2011 test events, Mills will hope that her and Eilidh McIntyre can continue that success as well as build on their recent 2019 world championship title.

2016 gold medallist and 2012 silver medallist, Marit Bouwmeester (NED), sealed her place at Tokyo 2020 two years in advance by topping the Laser Radial fleet at the 2018 World Cup Series Enoshima. Although she won’t be defending her title this year, she’ll want to deliver a strong week at Ready Steady Tokyo.

However, Pierre Le Coq (FRA) and Erik Heil/Thomas Ploessel (GER), all of whom won bronze both at the Test Eventand the Games, are not competing at Ready Steady Tokyo. Thomas Goyard is the French representative in the RS:X Men, while Justus Schmidt/Maximilian Boehme will be competing in the 49er fleet for Germany.

2019 Laser World Champion Tom Burton went from bronze at the 2015 Test Event to Gold at the 2016 Games, but he’s got fierce competition to represent Australia as he bids to retain his Olympic title. He’s joined at Ready Steady Tokyo by teammate Matt Wearn, who finished as his runner-up in this year’s world championship.

Dorian van Rijsselberghe (NED), double RS:X Men’s Olympic champion in 2012 and 2016, poses a similar threat from compatriot Kiran Badloe. Van Rijsselberghe took the world championship title in 2018, with Badloe runner-up, but Badloe got the better of him at the 2018 World Cup Series Enoshima and the 2019 RS:X Europeans, winning gold in both.

Ai Kondo Yoshida/Miho Yoshioka also became the first Japanese sailors to book their tickets to Tokyo 2020 by winning silver at the 470 Women’s World Championships. They’ll be at both Ready Steady Tokyo and the Hempel World Cup Series Enoshima, bidding to improve on last year’s second-place finish.

Over in the 22-strong Nacra 17 fleet, Jason Waterhouse/Lisa Darmanin (AUS) are amongst the favourites after taking Gold at last year’s World Cup. The Rio 2016 silver medallists, who won gold at the 2015 test event, will face tough competition from the Italians once more.

Ruggero Tita/Caterina Banti and Vittorio Bissaro/Maelle Frascari took Silver and Bronze respectively here in 2018, and will be pushing the Australians all the way as they aim to take a step forward towards Tokyo 2020 selection for Italy. 2016 defending champions Santiago Lange/Cecilia Carranza Saroli (ARG) will also be aiming for a medal at Ready Steady Tokyo.

Racing in Enoshima is scheduled to commence on Saturday 17 August. The 49er, 49erFX, Nacra and RS:X fleets will conclude racing on 21 August with the 470s, Laser, Laser Radial and Finns following on 22 August.