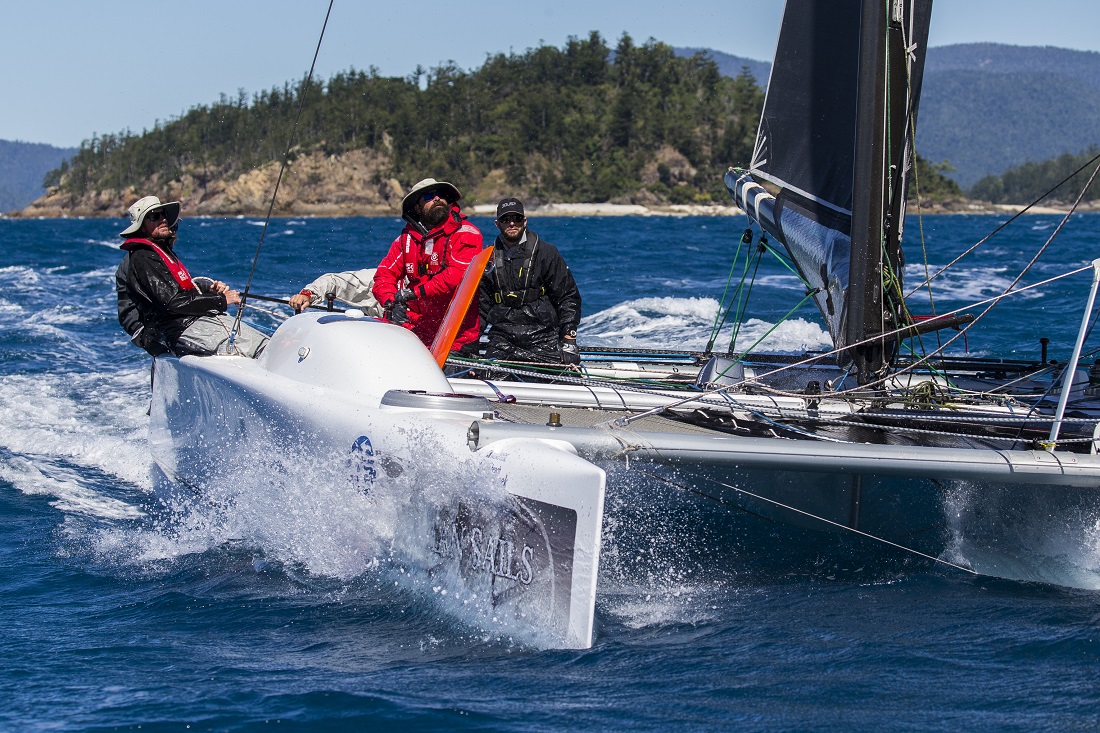 Ullman Sails, representing WSC, won an extraordinary five out of seven races, finished second in another and used its Race 2 fourth place as the drop.

Local sailor Mitchell said this afternoon, “I definitely didn’t expect to win. Having the four Extreme 40’s here, it was always going to be difficult. It’s definitely good to win this one, as the boat goes to a new owner in two weeks, so it’s good to tick my final regatta off with a win.

“The boat has been sold to an Australian and is going to Asia. Its first regatta there will be the Kings Cup. I hope new owner has as much success with the boat as I have.”

Mitchell counts crew work as a large proportion of his ongoing success. “It comes down to good crew work over a long period. Three of the six crew have been with me for a long time.”

On the Extremes: “All the Extremes are sailed well by a lot of talented sailors, so I always expect to see them up there.”

Julian Griffiths was pleased with The Boat Work’s second overall, as behind him in third, fourth and fifth overall were other three Extreme 40s; High Voltage (Mike Peberdy), Back in Black (Michel Van Der Zwaard) and Deepwater Collective (Brad Cawthorne).

In today’s race on Pioneer Bay, Ullman Sails beat Back in Black to the punch by 26 seconds on corrected time, The Boat Works finishing third.

“It’s the closest multihull racing we’ve (Extremes) ever had in Australia. One-design boats are so close in performance. They were all really well sailed by good sailors. The other guys have been sailing and training, more than us and getting on top of things.”

Division 2 Australian Multihull champion is Clive Kennedy’s Evil Gnome. The Farrier 85 from NSW was well sailed throughout, winning four of the seven races, including today’s.

“I am very happy, it’s a very hard place to sail,” Kennedy said. “The team worked well together and we won it. Today we had a nice breeze and a decent long course. We let the boat go and everything held together, so very happy with it.

“It’s good to win the title; good to win in that fleet. It’s a tough fleet and we had good racing. The Club did a good job this week, the regatta was very professionally run,” Kennedy ended.

Kevin Lord’s Vivacious, a Seawind 1160 from NSW took out the Multihulls Passage Series: “You have to be pretty happy when you win; it’s been really competitive. Everyone was on the money and each had a win. We kept each other honest and we had great conditions, which doesn’t always happen.

“We’ve enjoyed ourselves and the regatta is very well run, the committee does a wonderful job – it’s a tough job.  Loved having the sports boats here, flying past us like flies. Then there’s the beautiful classics, it’s a great mix of boats at Airlie Beach.”