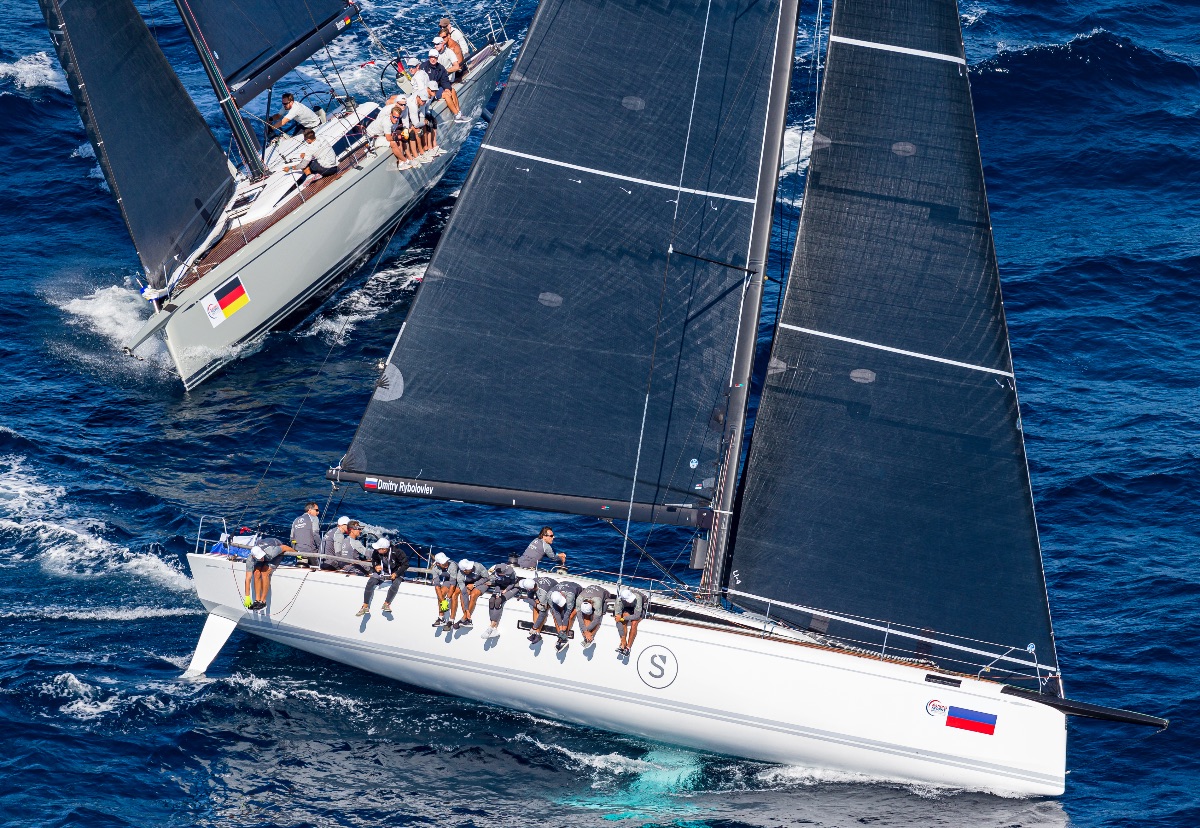 Exciting racing for The Nations Trophy

Palma de Mallorca: The final day of The Nations Trophy 2019 brought more drama as a building breeze compressed the action into a solitary race for all classes and while the individual race winners have enjoyed their moment, it was the overall class winners and recipients of The Nations Trophy itself that celebrated the loudest.

The Nations Trophy brings together a high-level fleet of skilled, passionate yacht owners and crew competing for both individual and national honour. Held from the 8 – 12 October, the second edition of the biennial contest attracted the largest ever gathering of one design yachts from the Finnish yacht builder, Nautor’s Swan: 41 boats, across four classes, representing 14 countries.

Ken Read, tactician on Cuordileone, raced in the 2017 Nations Trophy and was full of praise for what had been achieved: “It is a testament to a lot of people taking the event seriously.”

ClubSwan 50 World Championship
With 18 ClubSwan 50s on the start-line, Nautor’s Swan’s flagship one design model led the way. A group of determined owner/drivers had gathered together strong teams, many of whom had been together for the length of the Mediterranean season.

Fastest out of the blocks was Ross Warburton’s British entry Perhonen, with Ian Budgen in the tactician’s role and, internationally respected local Mallorcan, Nacho Postigo as navigator.

Days one and two, of the four-day regatta, were light and shifty. Perhonen found the groove straightaway and, despite long delays before racing started, kept focus to score a bullet and a second. At the halfway point, in terms of days at least, Warburton’s crew was in a strong position contrary to their own expectations.

“When we started the season, we were bobbing about at the back of the pack, wondering how to sail the boat,” explained Warburton. “We’ve learnt a lot and the crew has made huge progress.”

Budgen was also refreshingly honest in his assessment: “When it was light and fickle, with a little bit of luck and going the right way, we’ve managed to clock in two good results. But this has been our first season, the goal has been to progress and keep learning. Every day is a school day.”

Skorpios, by contrast started the event with erratic results – a second followed by a fifteenth – and were a long way off the podium.

Fresher breeze on day three, and three quick-fire tough races, proved the turning point. “On the first race of the day, we got the front of the fleet and managed to pull off another second,” recalled Budgen.

“We have some really good sailors on the boat – Nacho, Mo Gray, Gundy (Jon Gundersen) – a good calibre of people, and as a crew we are always improving. Minimising our mistakes and taking opportunities.”

As the wind built, though, the course appeared to compact. Mark roundings were more fiercely contested. All the crews upped the gears and the pressure.

“Despite good starts we found ourselves going slowly backwards through the fleet,” admitted Budgen. “Boats with slightly more experience like Cuordileone, like Niramo, had worse starts, but did better upwind. They are at a level we are still trying achieve.”

Meanwhile, Skorpios, who quietly finished third overall in this season’s Mediterranean League, put an unmatched run together scoring two bullets and a third on Day 3. Taking over the lead, the Russian crew could taste victory even if a four-point gap was anything but secure.

“We go into tomorrow in a good position,” admitted Echávarri. “But anything can happen. Nothing is done yet. We need to concentrate, keep working and see what happens.”

With the final day reduced to a single race and Perhonen failing to reach their earlier dizzying heights a conservative fifth place was sufficient to secure the world championship by a surprising 12 points.

Echávarri, an Olympic gold medallist and two-world champion, seemed to have impressed even himself. He was especially pleased that they had held it together. “It was really hard work today, in conditions we are not used to with waves and medium-strong breeze of 16/17 knots,” he explained.

“The guys did a fantastic job. The navigator was always in a good line and I am very proud of all the team.”

Skorpios had worked hard all year, clearly peaking at the right moment in both season and regatta. “We’ve been getting better and better all year,” said Echávarri. “It has paid. Suddenly we are world champion.”

There are plenty of really good sailors in the ClubSwan 50 fleet coming from the Volvo Ocean Race, America’s Cup and the like, the resulting challenge is apparent.

“It’s a strong fleet with 18 boats, you can get into really rough situations at the marks, boats contesting hard. It can be really complex,” says Echávarri. “Either you are in a top position and you sail a bit freer or you get stuck in a crowded rounding, and everything gets really complicated.”

Pushed to identify what lifted them above their peers, Echávarri thinks one area stood out: “We had good performance all week, the numbers from the boat were fine, the trimmers were super, but what paid the most was that we had really good starts all week.”

At the prize giving, speaking on behalf of owner Dmitry Rybolovlev, Daria Stokous (relief helm) had this to say: “We want to thank Nautor for such a beautiful event. It was incredible racing and has become such a unique experience.

“Thank you to our whole team and every team here that has made this such a memorable thing. You all did so great, and we are so excited to go again and again.”

If the size of Skorpios’ achievement was in any doubt, Read gave some incisive perspective: “Look at a team like Bronenosec, who stepped into the boat two years ago and finished second at the regatta. This year, they step into the boat and by their own admission they are nowhere to be seen.

“They could be the most talented group here, but the class has just gone straight up, so far as learning curve.” Read is enthusiastic about the future: “The owners are having a blast, the crews are highly competitive, it is just a wonderful mix of everything that is good about sailboat racing.”

Swan 45 World Championship
The ClubSwan 50 was certainly exciting, but tension paled in comparison to the Swan 45, the oldest of the one designs competing this week. Everyone had expected boat of the season Porron IX to lead the way. Instead, the Spanish crew never really found their mojo and finished off the podium.

With only one race possible on the first two days, the third day ignited the class. At one point German boat Fever looked to be heading to the top of the standings with a string of powerful performances.

Losing a protest in the second race, and posting a consequential eighth though, seemed to have put a real dent in their aspirations. Tea Ekengren-Sauren’s Blue Nights score line of 2,2,2 gave the Finnish team a one-point margin over Porron IX and Motions, with Fever and Spanish boat, Michelle further back, but in the mix.

Blue Nights’ lead proved to be a fragile as it appeared. It was impossible to cover the entire fleet and, in the end, it was the team on Fever that won through…just.

Fever, Motions and Blue Nights finished first, second and third in the race. It was the perfect storm. All three finished on 15 points, with Diederichs taking the world championship by virtue of more first places than his rivals.

“It was a very interesting contest. It could not have finished closer. Three boats on the same points,” exclaimed an elated Diederichs. “We had a bit of bad luck yesterday with a disqualification in the second race, which put a dampener on morale.”

Given they had also posted two firsts, the Fever crew knew it was well within their capabilities to recover. “I told the crew to forget about yesterday”, commented Diederichs.

“Yesterday was yesterday, today we are going to show them.” Diederichs had returned to the Swan 45 class this year after an extended break. “I think the level is pretty competitive,” he advised. “It took us the whole season to get back into the groove, get the set up right and work with the new sails. I have a totally new crew as well. We worked hard and here we are.”

Second-place was a good return for Lennard van Oeveren and the Motions team, even if their ambitions were higher. “We came here aiming to win. We have worked really hard and knew we had a fast boat.

“We really enjoyed the week, the fleet was good and the last two days of racing were great,” commented van Oeveren. “It was so tight. It’s unfortunate we ended up in second, but tied on points with first and third shows how close it is. I really enjoyed it.”

Van Oeveren paid tribute to Fever and the enjoyment of the one design racing on offer at The Nations Trophy. “It’s great to have Fever back in the competition after so long away and to see them do so well,” he said. “There were fifty or so Swan 45s built and I would love to see more of those owners with us enjoying these events.”

ClubSwan 42 European Championship
Andrea Rossi and the Mela team rarely put a foot wrong over the four days. Their worst result was a fifth in the final race, when protecting a five-point lead over Lorenzo Mondo’s Far Star.

Sailing conservatively on the last day, Rossi’s team quietly did what they had done all series, posted a solid score in the top half of the 12-boat class.

“I’m feeling so happy,” said an excited and relieved Rossi. “First I want to thank my crew who delivered this result. We have been really competitive and a really strong crew.”

Rossi was also proud to have delivered the Italian flag to the top rung of the podium. “I believe our spirit has been that of a champion,” explained Rossi. “The other crews are really good, but our tactician, Enrico Zennaro, made a really good job especially when we were suffering. He got us out of some bad situations.”

Barry Sampson, the owner of Long Echo (GBR), has been in the class for 11 years and was delighted for Mela, but equally so for his first place in the final race. He was quick to identify the current strength in the class, so much so that this was the first regatta he had a professional tactician, Rob Greenhalgh, aboard.

“It took time to get the crew to get used to each other and to me,” Sampson said. “We were able to sail our own race today as the others at the top went off match-racing each other. It was the first race we really got away cleanly.”

“The class has really stepped forward a lot. You’ve only got to look at Natalia. They won the Copa del Rey, but today they’ve been beaten by a number of boats. I welcome the lift. You don’t go racing one design windward-leewards if you think it’s going to be easy.”

For Leonardo Ferragamo, President of Nautor’s Swan, The Nations Trophy had been a great success. The number of Swan One Design yachts in attendance was proof of the enthusiasm for real-time racing within the Swan family. Celebration among crews during the prize giving and the camaraderie shown ashore throughout the week is confirmation of gentlemanly spirit in which the event was conducted.

“It has been a really special week, with the unique atmosphere we envisioned at the outset,” Ferragamo said at the close of the regatta. “I wish to thank the Nautor’s Swan team, the Real Club Nautico de Palma and all our partners for their contribution. This is time for us all to accelerate and drive this vision forward.”