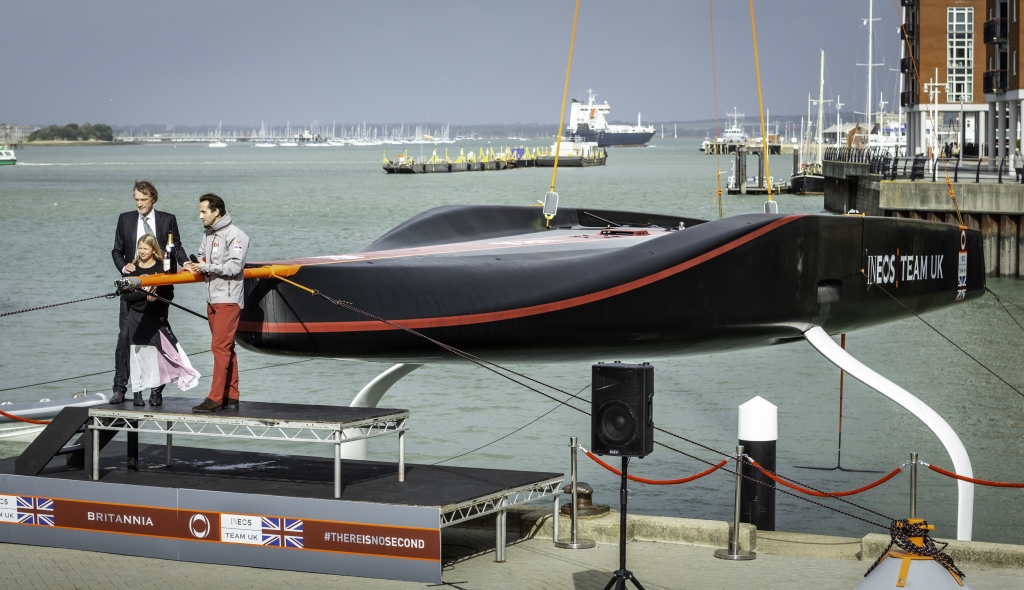 After 18 months of heavy secrecy shrouding anything to do with the AC75s, the 75 foot foiling monohull is quickly becoming an open affair with two new boats unveiled last week, less than 48 hours apart.

This brings the total to four and provides us with plenty of opportunity to analyse the differences that are already apparent.

On 3rd of October, the Italians of Luna Rossa Prada Pirelli Team was the third team to launch after the Defender, Emirates Team New Zealand, and the USA Challenger NYYC American Magic.

The Italian boat was christened ‘Luna Rossa’ by Miuccia Prada, CEO of the Prada Group together with her husband Patrizio Bertelli, during a ceremony at the team’s home base in Cagliari, Sardinia – the venue for the first America’s Cup World Series event next April.

A couple of days later in Portsmouth (UK), Julia Ratcliffe, the daughter of the syndicate owner Jim Ratcliffe, did the honours of naming INEOS TEAM UK’s AC75 ‘Britannia’, in homage to one of Britain’s most famous racing yachts.

As the Protocol of the 36th America’s Cup doesn’t allow the teams to shroud their boats, the new 75' monohulls were quickly snapped and “instagrammed” around the world for everyone – teams and fans – to comment and draw their first conclusions.

The new launches have only added to the diversity of Emirates Team New Zealand and NYYC American Magic’s interpretation of the AC75 Class Rule, confirming once again the high level of freedom allowed by the current design rules.

Design teams have spent a lot of time exploring different hull shapes within the Class Rule limits, looking for a shape with minimal drag in light-wind displacement mode while also addressing the stability required to generate thrust for take-off.

With the hull having no significant limits on structure other than a handful of standard AC rule limits, the shape of the hull is where the differences are most evident.

In broad terms it’s possible to pair the four boats with the Kiwis and the Italian choosing one approach and INEOS TEAM UK and American Magic going in another direction. However, experts may consider pairing the boats too simplistic. So what has been revealed so far that’s out there for everyone to see?

INEOS TEAM UK’s hull shape is probably the most radical in appearance; while the bottom has a very clean scow like line – similar to NYYC American Magic and opposite to Emirates Team New Zealand and Luna Rossa – the deck layout has a completely new design, with a very flat and low bow, slab sides and a straight sheerline toward the stern.

The British hull seems wider, with the foil rotation points (whose distance is fixed as per the Class Rule) appearing to be inside the hull compared to the other teams that have a dimple treatment where the carbon foil arms stick out from the hull.

Luna Rossa Prada Pirelli’s design has gone in the opposite direction with a boat similar but more radical than the Defender’s. Despite a more traditional bow – that gives a nod to those of the old America’s Cup boats – the sheerline is quite pronounced and tapers towards the transom. The bottom has a rounded-V structure in the centre ending just ahead of the rudder.