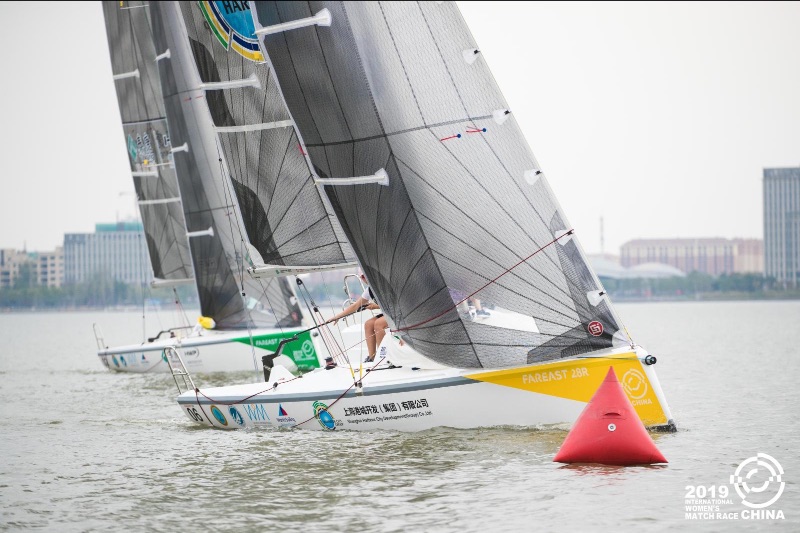 From 11-16 October, the inaugural 2019 China International Women’s Match Race, the final event of the 2019 WIM Series, will be held in Shanghai on the Dishui Lake.

Launched in 2013, the Women’s International Match Racing Series (WIM Series) is the first and only professional sailing series for women, delivering a global circuit of fierce competition where the world’s best sailors compete. The 2019 WIM Series comes to China for the first time and we expect the event be a great success.

The idea of bringing the WIM Series to China came from Demolar Du, CEO of Fareast Boats, builder of the competition’s Fareast 28R boats, based in Shanghai.

Ms. Du welcomed the sailors to Shanghai: “With the support of WIMRA, CYA and local government, the inaugural China International Women’s Match Race lands successfully in Shanghai, China this year. As the local event executive, we will try our best to make a unique and wonderful event. May all teams have a good visit to Dishui Lake.”

”It’s great to be in Shanghai Lin-Gang and to see the venue at Dishui Lake. We have the world’s best teams here, so I am looking forward to seeing some fantastic match racing this week,” remarked Anna Holmdahl White, WIM Series Director on arriving at the Shanghai Sailing Center venue.

Xiaowen Ni, skipper of the Chinese Team Fareast Ladies, has a strong history of Olympic sailing and training in match racing prior to the 2012 London Olympics, and will be making her debut on the WIM Series in Shanghai.

“I would like to think the organisation for all of their hard work. We are very happy to be here and meet so many top women’s teams,” Xiaowen Ni said.

“In the following days, we will enjoy the racing and make friends with the other teams. For us, the aim is not only to get on the podium, but also to take this opportunity to make a contribution to the development of the women’s match race in the whole world.”

No stranger to women’s match racing events is Pauline Courtois, France, the two-time reigning WIM Series champion and current World Sailing No. 1, said: “It's my first time in China and I am very excited to be here. We love the Fareast 28R boats; it’s the third time this year we've had the chance to sail in them. They are technical but fun and fast.

“It's always a pleasure to meet and sail against the other teams and we can't wait to start racing,” ended the skipper of Pink by Normandy Elite Team.

Racing begins on Saturday 12 October local time with the round robin where all teams will face each other.

The top four teams from the round robin will advance to the quarterfinals while the next six will have a second chance in the repechage stage to advance to the quarter-finals. The semi-finals and finals will follow. The competition will conclude on Wednesday 16 October when the champions will be crowned.