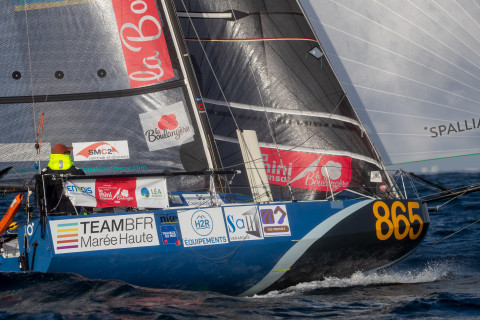 The finish of the first leg of the Mini-Transat La Boulangère is imminent in the prototype category. At 15:00 UTC this Sunday, François Jambou was just 30 miles from the finish in Las Palmas de Gran Canaria. Tanguy Bouroullec and Axel Tréhin were respectively 15 and 25 miles shy of the leader.

François Jambou is expected on the finish line from 19:00 UTC. This estimate is subject to change given the very light wind conditions reigning over the Canaries. To follow this three-way match race up close, the cartography (https://www.minitransat.fr/en/follow-race/cartography) is now updating every hour.

In the production boat category, victory is likely to be played out between Ambrogio Beccaria and Félix de Navacelle. At 15:00 UTC, Ambrogio was leading the way some 80 miles from the finish. The podium for the production boats should be revealed tomorrow, Monday.

This was not really the scenario that the favourites in the prototype category had envisaged when they set sail from La Rochelle on Saturday 2 October. François Jambou, Tanguy Bouroullec, Axel Tréhin and the others were expecting a very quick race and the routing was promising. However, experienced sailors as they are, they knew only too well that it certainly wasn’t a done deal.

Finish this evening (or tonight?) in the prototype category

The 1,350 miles leading to Las Palmas have been complex and punctuated by a wide range of weather conditions that have really put the sailors to the test. The finale in light airs is doubtless especially demanding. François Jambou, Tanguy Bouroullec and Axel Tréhin will be the first to tell all on the pontoons in Las Palmas.

At 15:00 UTC, François Jambou seemed well placed to take the win, just 30 miles from the finish line and racking up about 5 knots of boat speed. He might well cross the line at around 19:00 UTC, that is unless the wind drops right away off Las Palmas turning the last few miles into a very hard slog, made all the harder by having two of your closest pursuers breathing down your neck.

Given the light wind conditions, it’s hard to go by the routing and establish a precise ETA for the different skippers. In the production boat category, we’ll very likely discover the podium winners in the second half of the day. At 15:00 UTC, Ambrogio Beccaria was still leading the fleet, tailed by Félix de Navacelle and Julien Letissier, the latter likely to be pleasantly surprised by his performance in this first leg. Tomorrow, we’re expecting a great slew of arrivals as there is a compact group hot on the heels of the top trio.

83 skippers out on the racetrack and some substantial separation

Yesterday evening, following on from the retirement of Czech skipper Pavel Roubal (908), Jonathan Chodkiewiez (958) and Jean-Baptiste Ternon (880), a fourth retirement was announced by Yann Blondel (836), who decided that he didn’t have enough time to effect repairs in Leixões near Porto. Indeed, on top of energy issues, he also lost use of his autopilot and had a broken rudder pintle.

Lamenting some technical issues but not planning a pit stop at this stage are Guillaume Coupé (906), who hit a whale 3 days ago, causing popping of the structural floor of his boat and movement of the keel. Inevitably the boat has suffered some delamination, which he hopes to repair in the Canaries and, in the meantime, he is not pushing the boat too hard. Spanish sailor Miguel Rondon (954) has no power aboard but is continuing his race. The rudder fitting on the boat skippered by Axelle Pillain (781) has unscrewed itself and cracked so she’s strapped it up in a bid to make it safe. As for Thomas Gaschignard (539) and Bruno Simmonet (757), their energy woes are presently resolved thanks to Saturday’s sunshine.

Back out on the racetrack at last, Briton Joe Lacey (963) has finally got Cape Finisterre behind him and is making nearly 5 knots en route to the Canaries and David Kremer is making around 7 knots in more favourable conditions off the coast of Portugal. Both courageous skippers are sure to be delighted to finally be heading in the right direction after their technical issues…