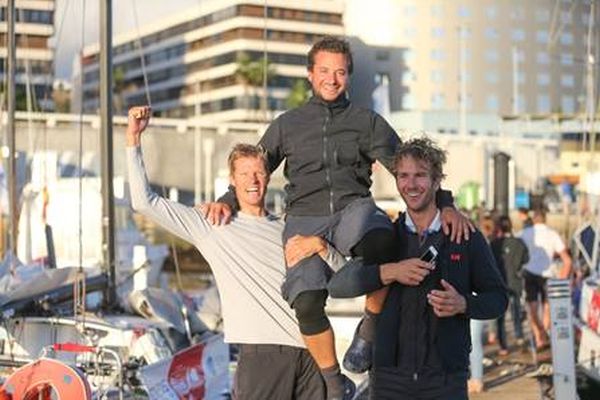 Crossing the finish line in Las Palmas de Gran Canaria at 04:30 UTC, Ambrogio Beccaria took the win in the first leg of the Mini-Transat La Boulangère, after 8 days, 19 hours, 52 minutes and 07 seconds of racing. Event favourite in the production boat category, the Italian skipper held rank despite a complex scenario and a tightly bunched pack of pursuers on his tail. Félix De Navacelle secured second place, 1 hour and 43 minutes behind Ambrogio and Matthieu Vincent completed the podium (2 hours and 40 minutes behind the winner).

Here’s the low-down from these three sailors.

1st Ambrogio Beccaria (Geomag): “I am so happy! I didn’t think I was in the lead. Yesterday morning, I didn’t listen to the weather and the rankings as I was sure I’d lost all the lead I’d had overnight. I thought everyone was positioned to the West and with the breeze kicking back in from the South-West, I believed I’d lost it all, especially as I knew that Félix was very close.

“As such, I stopped myself sleeping and eating for at least 15 hours in a bid to sail as quickly as possible and not have any regrets. I seriously doubted myself. I told myself that it wasn’t serious, that if I was third that was still good. I first started doubting that when I heard the sailors on the prototypes talking over the VHF and thought how strange it was. In the end, I discovered that everyone was positioned to the East.

“I’ve taken the win in this first leg and it’s really very cool! We had some very varied conditions. I wasn’t expecting a leg like that at all. It was very hard on the nerves. Exiting Biscay was complicated: the pressure at the start, the sea state, everyone was a bit sick… After that, we really pushed hard along the coast of Portugal to end up with these calm conditions at the finish. It was terrible!

“I’m pleased to have been the first to finish. After that, it’s a race against the clock. If I’m first with a 10-minute lead that’s not very much, if it’s 2-3 hours that’s already better. So I’m awaiting the arrival of Félix, I don’t know where he is.”

2nd Félix De Navacelle (Youkounkoun): “It’s been great to have managed to hold onto this position since Cape Finisterre! Over the last two days, when you see how far it is to the finish, you say to yourself that you really have to pull out all the stops to hang on in there. The best moment was when I heard over the daily link-up that I was first for the first time: total ecstasy! That’s also where I discovered the pressure of no longer having anyone to chase.

“I tried all I could to ensure I had no regrets. There are plenty of times where you’re latent and unable to motivate yourself to do things. I forced myself to move, to stay active and clear-headed. I stuck to the recommended slots for sleeping. I’m ready to go again! I really got into the rhythm and I was really at ease aboard.

“The boat worked fantastically well. I had to climb to the top of the mast twice. Little adventures in themselves. I believe I managed to have fun in this race, which isn’t necessarily that easy on a Mini when you’re flat out.”

3rd Matthieu Vincent (L’Occitane en Provence): “I’m third?! Ah, I wasn’t aware! Wow, that’s great! It’s been a long hard battle. It took me 2-3 days to get into it as it was a bit hard to leave the family and I felt a lot of nostalgia. We had it all out there, happy times and some very tough times. I had a fair amount of damage, but just learning that I’m third makes me forget all the hardships I’ve had over the past eight days. It’s incredible.

“It was a great leg but also very hard psychologically. As usual, I’ve struggled with the solitude and remoteness. As soon as you have people around you it’s okay, but as soon as I end up on my own, it’s hard to deal with. To my mind the Mini-Transat really is a personal challenge rather than my idea of fun.

“Today, I feel pretty proud of myself. I had a fair few incidents during this leg. I did a somersault! I knew the bow was burying in but not to that extent. I was on my knees putting a reef in the mainsail and the boat was submerged up to her mast almost and I was projected overboard. I ended up in the water, the boat drove down and then broached at 90°. It was mega full-on…

“On top of that I had to scale the mast for the first time at night, something I’ve never done and it was an opportunity to try it!

“The end of the course was cool. Battling with Amélie, Nico and Julien was really nice. We really had some good conditions, we were able to get some rest and get back into a normal rhythm of life, because quite honestly along the coast of Portugal it was really hardcore. Now it’s time to make the most of the atmosphere, friends and family who will come along and savour the good times.”