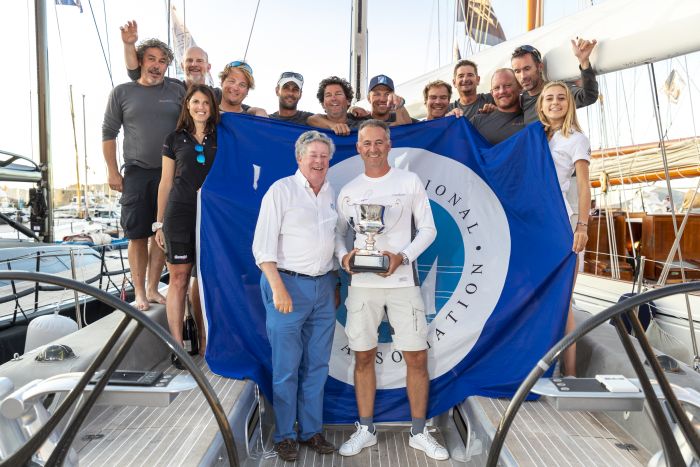 While the Mediterranean Maxi Offshore Challenge this year was into its fourth season, its inshore brother was introduced anew for 2019 by the International Maxi Association, the World Sailing-recognised body that administers and promotes maxi boat racing globally.

Impressively this first edition of the MMIC went to the wire, not just to the last event but to its last race. Going into Les Voiles de Saint-Tropez, Benoît de Froidmont's Wally 60 Wallyño led Jean-Pierre Barjon’s Swan 601 Lorina 1895 by just one point. Going into the final day of racing off Pampelonne Beach, they were tied on five points. In this Wallyño managed to finish less than a minute ahead of Lorina 1895 on the water, her time magnified under IRC being the lower-rated.

“It was very close and the outcome came down to the very last moment, which made it tough, so to win was all the more enjoyable,” said de Froidmont, who is also President of the International Maxi Association. “It is a good thing for our Mediterranean Maxi Inshore Challenge, because it has proved it can be close, which I hope will encourage more boats to come and join us in the future.”

Among the silver Wally 60's top inshore results during 2019 were a win at Rolex Capri Sailing Week, a second place to Lorina 1895 at Rolex Giraglia (but winning in the combined inshore-offshore results). Finally Wallyño gained a small advantage over Lorina 1895, beating her by one place in September’s Maxi Yacht Rolex Cup.

“We did quite well over the season,” continued de Froidmont. “We didn’t have any technical issues with the boat which we had in the past apart from breaking a few sails…”

Winner of the IMA’s 2018-19 Mediterranean Maxi Offshore Challenge (MMOC) was Miguel Galuccio’s Vera. As usual this series kicked-off with the 2018 Rolex Middle Sea Race and continued on into 2019 with May’s Regata dei Tre Golfi (the offshore feeder race to Rolex Capri Sailing Week), the 151 Miglia-Trofeo Cetilar from Livorno to Punta Ala via the Giraglia Rock, culminating in the offshore race of Rolex Giraglia and Palermo-Montecarlo in August.

A Reichel/Pugh-designed and Cookson-built Nauta 84, Vera began life as Pier Luigi Loro Piana’s My Song, but was acquired by her present London-based Argentinean owner three years ago. Although relatively new to sailing, Galuccio has surrounded himself with an excellent team and has taken some smart steps to fast track his knowledge, including gaining experience in smaller race boats such as the Melges 32.

This season Vera has proved exceptional offshore. During the 151 Miglia-Trofeo Cetilar she repeated her previous owner’s success from 2016, winning overall under IRC but did so in an elapsed time of just 15 hours 10 minutes compared to My Song’s 17 hours 57 minutes. She followed this up with a disappointing Rolex Giraglia, due to a park-up off Monaco, but set this right by claiming both line and IRC corrected honours in the Palermo-Montecarlo.

If the MMIC was close, the MMOC was closer still with Vera finishing tied on points with George David’s Rambler 88, but winning on countback. Third place went to Marietta Strasoldo's Swan 651 Lunz am Meer.

“There are people in this team who are very young and who will be very good,” said Galuccio, who enjoys watching his crew cohese and develop as a team. “Michele is super bright and his starts are like he is on a Laser. Bouwe has been instrumental to putting the processes in place and he has worked very well with the Italians. He also brought in Aksel [Magdhal] in to navigate.”

Vera was also in the running for MMIC until a broken rudder at the Maxi Yacht Rolex Cup curtailed this, still leaving her finishing a respectible third overall behind Wallyño and Lorina 1895. Galuccio admits he prefers racing offshore: “I love the offshore because it is more diverse, there is more wind and much more strategy. And in strong wind when you are on watch you get to see people like Bouwe and Michele driving – they don’t drive the inshore.”

The IMA’s Mediterranean Maxi Inshore and Offshore Challenges will continue with the same events and format in 2020, but the MMOC beginning with next week's Rolex Middle Sea Race starting on 19th October.