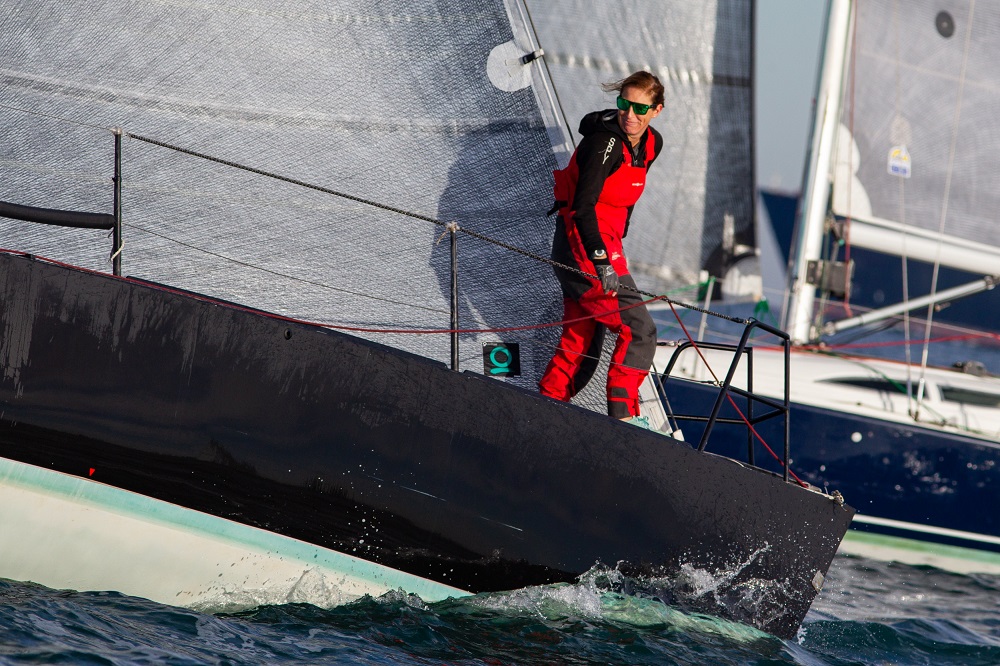 A wider range of conditions would be hard to find – extremely light and shifty on Day 1, shifty moderate winds on Day 2, while the final day produced moderate winds that developed to 18 knots plus, with bullets up to 28 knots towards the end of the final race, testing everyone.

“It was super close racing, as you can see from the results,” the event’s Sailing Co-ordinator, Allicia Rae commented.

“Competitors are celebrating, which tells us what a success the regatta was. We had 27 entries from around Australia and New Zealand, because the regatta continues to grow in reputation and numbers, which is wonderful.”

Madonna Derks (Vic) came into the day leading Division 1 with the J/70 Spike, and finished that way, despite her worst race of the Championship – an eighth in Race 5. She won within a whisker, as the Adams 10 Salamander III, steered by Monica Jones, moved up to second place following a pair of third places in the final two races, to finish one point behind. Last year’s AMS Division 1 winner, Elyse Guevara (NSW), rounded out the top three, after helming the Adams 10 Cruiser, Scarlet Runner to fifth and 10th places.

However, none of the top three won either of the final two races. Those honours when to crew Claire Heenan (NSW), aboard the Adams 10 Jungle Juice in Race 5, while Mary Ann Harvey’s South Australian crew won Race 6 with the Bavaria 40 Cruiser, School’s Out.

“We are ecstatic with our achievement,” Derks said. “Genevieve (Popp) helms, I do bow, we’re partners in crime.”
Popp added, “It shocked us when the wind hit 18 plus knots, with huge gusts, but we sailed conservatively, because it’s the first time we’ve had Spike out in heavy weather. We were so impressed with how the boat handled it – she’s just a light sport’s boat,” Popp said, adding: “We had butterflies though.”

“We put a lot of pressure on ourselves to do well,” Derks said. “We were just happy we got around the course, and we weren’t involved in carnage and that was important to us.”

“It’s a hard but brilliant regatta – the organisation, right down to the sausage sizzle at the end of the day – it’s friendly, it makes you want to come back,” Popp added.

Division 2 was won by Jack Tar, the S80 skippered by Deb Parker (Vic). Her crew maintained second place throughout and came into the final day tied on points with the leader, but second on countback. Jack Tar won Race 5, but was 13th in Race 6, which was used as a drop.

Imaginer, skippered by Sandy Anderson (WA), moved up from third of Day 2 and slotted into second place after steering the S80 to 9-3 results in the last two races. Tanya Kelly (Qld), at the helm of the S80 Merak, finished third overall after sailing to second and fourth places, her crew’s best results of the regatta.

Day 2 leader, Mood Indigo, also an S80, dropped out of contention in the stronger winds, 11th and sixth places dropping the Northern Territory crew into fourth overall, missing the podium by just one point. The final race was won by the Cath Beaufort helmed S80, Up ‘N Go (Vic) in this hard fought for series.

“We had a fantastic Race 5 – after a pretty good start, we thought we should go left, but had to wait to clear other boats. When we did tack, we lifted all the way to top mark and laid it. From there it was a matter of covering the fleet and making sure we didn’t do anything silly,” Deb Parker commented ashore.

“We had our struggles in Race 6. We went through the finish with our spinnaker flying from the mast. It made the boat hard to control – I didn’t want to round up – the boom was in the water at one stage. I was worried about the kite or sheets touching a mark or another boat. It was gusting 27 knots.”

Parker has done over 20 of these regattas, including two with the founder and past RMYS commodore, Gai Clough. “It was a fabulous regatta as always. I had a great crew who were always switched on and kept the boat moving. Thanks to the boat owner, Rob Feigan, for lending us Jack Tar for a second year. This club always runs a good regatta. It gives us fabulous sailing and the support onshore is second to none,” she said.

The scratch series for the S80s went to Maria Ferrario and her ‘Escape’ crew from the Tauranga Yacht and Power Boat Club in New Zealand. A crew skippered by the Argentinean born Ferrario finished second overall in the S80 at last year’s Australian Women’s Keelboat Regatta.

Three points adrift in second place was Imaginer. Third went to Helen Warneke’s Recycled Reputation from Queensland. Warneke had led Division 2 on the opening day, but fell out of contention.

Ferrario said of their win: “It’s a really cool regatta, so we came back – and won. We sailed well on the second day and sailed pretty comfortably in the final two races, just keeping an eye on our rivals. We sailed safely in the middle of the fleet because we wanted to win the regatta. We were pushed over the line early in Race 1, so we couldn’t afford another bad result.”

Will she and her Kiwi crew be back? “My crew have been together a while, I think they will be happy to come back next year. We know the place better, we know the conditions and we love to sail here. The organisation is very good; they look after all the details. Thank you to the boat owner who loaned us the boat too.

“I will go back and talk to the younger girls, I hope this regatta and our win is inspiration for them. I am going to try and get a second team of young people to join us at the regatta next year, because there are all different levels here – there is competition for everyone.”

The AWKR also contains some special awards as follows:
.Novice Helm – The person must not have helmed regularly for more than 12 months and their first time helming at the regatta. It was awarded to Christine Pfeiffer from Take Five

Sportsmanship – Rose of Wyndham (They had right of way on the final day, but gave way to Spike because they didn’t want to slow down someone who could potentially win the regatta.)

Rohan Brownlee Leadership and Endeavour Award – Karen Koedyk, who came over from Perth to helm for a novice skipper who didn’t want to helm herself (Rebecca Irwin from Espresso). She also loaned her ownS80 to the crew from RFBYC so they could practice before coming over.