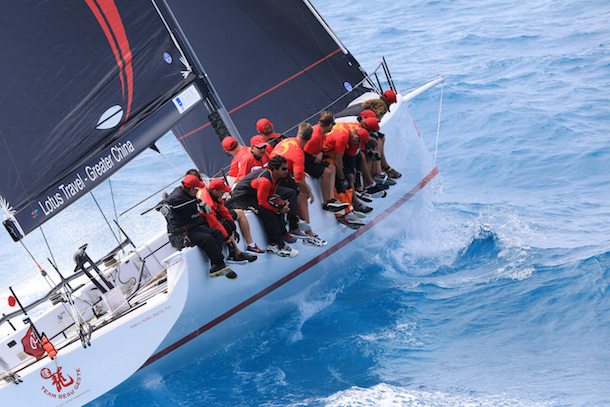 Four champions have been declared at the end of the pinnacle Australian IRC series at Hamilton Island; two existing titleholders continue to reign in their class and two new champions join the small band of winners dating back to the year 2000.

Light drizzle soaked all crews contesting the final Lindeman Island race at Audi Hamilton Island Race Week, but the tradewinds stayed constant until the regatta’s final hours when the wind died to 5 knots and boats struggled to the finish line.

“It was very lucky it worked out fine,” said Kwok. “The new boat is very fast upwind and during this regatta we realised its downwind potential is also pretty good. There’s nothing like tuning up a boat against very good competitors.  For our team we treasure people who have gone through the Med Cup, so we have several from the TP52 Ran, most of all we have reliable crew we have sailed with before. It makes things go easier. I had some fun this week.

“In an ordinary regatta if you win back-to-back and then a third time you take away the permanent trophy. I’ll have to talk to the yacht club ….” Kwok joked. “We would like to come back if we have the time.”

From here Team Beau Geste goes back to New Zealand for their IRC championship in January then the ORC World Championship in Copenhagen in June. “Winning Hamilton Island is special; I think this is the toughest event with the greatest range of conditions,” said Kwok’s sailing master Gavin Brady. “The best boats in Australia come to it; there are no push-overs here. To win this you have to be a well-rounded team with a well-rounded boat.”

Bob Steel’s Mat 1180 Quest was launched last month and already has an Australian title in the bag, in IRC division B, without needing to sail the final race today, Saturday August 22, 2015.

“We knew from Airlie Beach we had our work cut out for us in windward/leewards and around the islands we go well,” Steel said dockside once the Piper-Heidsieck was sprayed and helmsman Jamie MacPhail thrown in the tide. “In big breeze this boat is a rocket ship. The competition, Khaleesi and Vamp, was excellent we were fortunate to have a day off today to get ready for Magnetic Island Race Week.  We are very, very happy.”

Jamie Wilmot and David Fuller’s Corby 49 Vamp (CYCA) was second to Quest by a point and Pauline and Andrew Dally’s DK46 Khaleesi (MHYC) another point off in the tightest finish of the four championship divisions.

“We nearly snatched defeat from the jaws of victory,” said a nervous Hickman as he waited for final results to confirm Wild Rose’s seventh place today was enough to keep Phil Dash’s Justadash out of the top spot. “The wind died coming to the finish and the current changed, and we couldn’t get the old girl going. Over 12 knots we get moving, in 3 knots it’s ‘no try’ and we get smashed. You have some of the best sailors here at Audi Race Week and it’s very close; it was a great regatta.”

The IRC Passage division was added to the 2015 championship for owners preferring distance racing to round-the-buoys. Matt Owen’s borrowed BH36 Local Hero and Canberra crew have a long tradition of podium finishes at Audi Hamilton Island Race Week and now the 16ft skiff champion and CEO of Canberra Yacht Club, who was planning an overseas world championship tilt in place of this year’s Race Week, has the premium IRC crown as well.

“We are pretty happy to take the win. Three-quarters of the way through the regatta we had the boat going, we only sail this boat once a year so it takes us a while to remember where everything is. We had some fantastic competition and didn’t take it for granted until our win yesterday cemented our first. It was minus three in Canberra this morning, we are thrilled to be at Hamilton Island; it’s the easiest event we do, great race management and a beautiful place to be. We love coming here every year.”

Attending his first IRC Australian Championship, Yachting Australia CEO Matt Carroll was full of praise for Glenn Bourke and his team at Hamilton Island.  “Our thanks go to the boat owners and crews who competed this week, their commitment provided outstanding racing for the whole fleet and some great competition within each division. To the race officials, volunteers and media, we offer our thanks for creating a special series.

“We thank the Oatleys for sponsoring the IRC Australian Championship and again raising the standard of competition. YA will shortly be making an announcement about future Championships as we want to continue to raise the standards and profile of this premier yachting regatta”, Matt added.

Matt Allen, president of Yachting Australia and owner of Division A entry Ichi Ban, said, “Hamilton Island again delivered a superb week of sailing with a great mix of windward/leewards combined with the tactical longer races, making it a pleasurable experience for crews in spectacular surroundings.  It was another great fleet who challenged for, and in two divisions defended their IRC Australian championship title. Our congratulations go to the winners.”

All championship winners and placegetters are attending this evening’s gala trophy presentation where they will be presented with the IRC Championship perpetual trophy, Hamilton Island trophy, prize of three nights’ accommodation at qualia including airfares, and a VA Piper-Heidsieck Magnum.