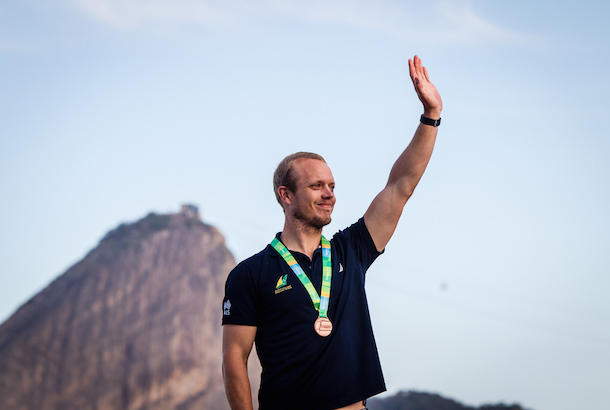 Australian Sailing Team’s leading Nacra17 crew of Jason Waterhouse (NSW) and Lisa Darmanin (NSW) had their scheduled Medal Race delayed to Saturday, due to postponements for Medal Races schedules prior to theirs today. The pair will carry their yellow leaders jersey into the final event day and are in medal contention five points ahead of the second ranked Dutch crew.

Australian Sailing qualified five of its six crews competing in Rio for the top-ten Medal Races.

It was week of long days on the water for Laser World #1 Tom Burton and the Medal Race day was not much better. The Laser kicked-off the Medal Races but with a light and ever changing wind, the start of racing was held up resulting in the whole day’s race schedule having to be postponed.

“It was long day for a Medal Race day. We were down early getting the boats measured and then out there it was really shifty and patchy so we sat around and were postponed for a little bit. But the breeze came in and we had a shifty race,” Tom Burton said.

The Medal Race was always going to be a tight one with Tom Burton going into it ranked third and tight on points with Frenchman Jean Baptiste Bernaz in fourth and only three points behind second ranked Tonci Stipanović from Croatia. Italian Francesco Marrai topped the ranks sixteen points ahead of Burton ahead before the final race.

And Burton made it interesting for everybody watching with changing positions in and outside the medal ranks through out the race:

“I had a nice first beat really picked it well and led around the first mark. At the bottom I got done for rocking (yellow flag penalty turn) I think and picked the wrong gate mark as well so that put me back into third. I kind of went the wrong way getting shepherded by one of the guys in contention for a medal with me. I was up and down but finished off with bronze, so I can’t be too sad.”

“The whole week was kind of up and down. I started off very slow and not sailing very well and getting a little unlucky as well. It could have been better at the start, but I had a really solid middle, which got me back into the game and for the last few days I was really back in it. I didn’t go quite well enough to get right to the front but things got definitely better and I was sailing much better towards the end, which I was quite happy about.”

With less than one year to go to the Rio Olympic go Burton is happy with where he stands and about the learnings from this event.

“Two test events and two medals so I’m pretty happy and I definitely learnt a lot about the conditions. I’ve been here for nearly a month and I’ve definitely improved my knowledge of the venue and saw a lot of conditions here. I definitely feel comfortable here and sailing in any of the courses. We’ll do a few more camps here and hopefully get a little bit more comfortable, but at the moment it could be Sydney harbour.“

Despite having medalled at the two Sailing Test Events, the internal Australian battle between Australia’s second ranked Laser sailor Matt Wearn (WA) and Tom Burton will continue until a final selection decision is made.

“Matt is World #2, I’m World #1, so it couldn’t be any better. I remember going into London, Slingo (Tom Slingsby) was super happy to have a really good training partner. And no matter who goes it will be the same. We’ll both be pushing, we’re both good enough to be there and it’s a pity only one can go.”

Matt Wearn trained with Tom in Rio in the lead up into the regatta and stayed with the team in Rio throughout the duration of the regatta.

Gold and silver were out of reach for the pair going into the final top-ten race, but a bronze medal was still possible when they were in second place for most of the final race. Subsequent confusion within the fleet about the course to be sailed, as well as the low sun obstructing the view of the finish line, resulted in a loss of points for Outteridge and Jensen as well disqualification for several other crews as Nathan Outteridge explained:

“It was pretty entertaining out there at the very end. We had a pretty good start, were leading on the left pack and second around the top. We held second the whole way around, which would have moved us up a few spots. But coming into the finishing line there was some confusion within all the boats as no one knew where the finish line was.”

“In an actual fact we had to go through the gate and do a reach through the finish, which our class basically never does, so there was a bit of confusion there. Plus the finishing line was in the sunlight so you couldn’t see it until about the middle of the pack. And we also thought it was actually three laps, because normally when there is no orange flag up the finish is not open so we thought we must have read it as two rather than three laps. So we went for another lap and saw everyone heading off for the finish. We finished last in the race, but I think three other boats missed the finish completely by doing the wrong course. It was an entertaining race, but didn’t change our position overall. Up until that gate we were happy with how the race was going for us.”

Looking back at the week he added self-critically: It’s lot of lessons learned for us and it was a tough week for us. The first two days, we were going quite quick and sailing quite well in the sea breezes. A couple of mistakes in individual races set us from first in the race to mid-pack and we then never really recovered from there. And then yesterday, with the frontal system that came through, we just had a pretty average day and you’re never going to get on the podium with results like that.

We’ve got a lot to look at and try and work out if it was a boat speed issue or if it was a tactical issue. At the end of the day, it’s usually both. It’s invaluable to be here and to compete and we’re really disappointed with the result, I think it’s pretty obvious. But we’ve got about a year to try and work out what we need to work on between now and next year.”

It was a long tricky final day of fleet racing for Mat Belcher and Will Ryan. The day started out with a change of course from inside the bay to the offshore course Niteroi due to floating rubbish on the inside Bridge (Ponte) course that had been flushed out of the many creeks and rivers by overnight rain.

Offshore the fleet was waiting for the wind to fill before they were moved back into the bay again and completed one race on the Naval course after the Finn class.

Belcher and Ryan retained their overall second rank despite a 14th place in that race and while they are seven points behind the first ranked crew from Croatia, points are tight across the top nine boats with all of them having a chance to win gold in Saturday’s double-point Medal Race.

In the Finn class the medals are out of reach for Australian Sailing’s Jake Lilley (QLD), who continued his climb up the results ladder moving up three spots from tenth to seventh to qualify for Saturday’s Medal Race. Lilley was excited to get the opportunity of another race on the Olympic waters:

“There’s not a lot I can do to move forward in the Medal Race, but the London Olympic Silver medalist is five points behind me. So, I guess I’ll keep an eye on him and try and win the race. Another day out racing in Rio is just fantastic practice for next year, so I can’t wait.”

Ten Australian sailors, including four London 2012 Olympic medallists, are competing in Rio in six of the ten Olympic classes in what is a key dress rehearsal at the 2016 sailing venue. Five out of six qualified for the final top-ten Medal Race.

Running from 15-22 August, it is the second Olympic Sailing Test Event to be held on Guanabara Bay, Brazil.