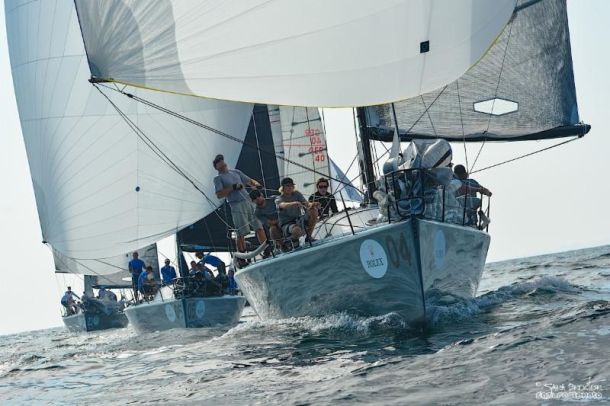 Santa Barbara, Calif. (20 August 2015) -The second day of racing at the 2015 Rolex Farr 40 North American Championship saw a duplication of the conditions that faced competitors on day one and which, according to the locals, are “normal… for June.” After postponing ashore, racing got underway in seven knots of breeze. As the afternoon progressed, the sun started to poke through the marine layer, and by the third and final race of the day, which started with a 10 knot west-southwest breeze, the mountains were shedding their curtain of clouds.

“The team had a good day,” said Jahn. “I think the team was really focused and wanted to do well and we didn't really do anything wrong. The key was good starts; we got in the right position; and we were fast enough that nobody passed us. It's always simple when everything works. Whether you do a design in architecture or you have a plan of what you are going to do in a race: where to start, when to tack, how to get in front and how to stay there.”

Jahn has Morgan Larson calling tactics for him, a relatively new pairing that is showing good results in the finish positions: “I think today, there was a real harmony on the boat. There is always somebody who makes a mistake and at the end it's more the result that's an indicator.”

The Rolex timepiece that will be awarded to the ultimate victor of the championship is a prize worthy of the accomplishment.

“I have my Rolex watch from the North American Championship which we won in Chicago eight years ago and I wear it daily,” added Jahn, who has won several throughout his racing career. “I think it's a great watch because it's steel and it's tough… like we want to be.”

Ray Godwin's Huntington Beach-based Temptress turned in finishes of 8-6-10 – for 24 points – to earn the honor of top Corinthian boat on Quantum Race Day.

“I never thought I'd be racing at this level,” said Godwin, who has been racing the Farr 40 since 2007. Explaining that this was his second year doing the entire circuit, Godwin remarked that it had been an eye opener to see how good the international competition was. “We're doing so much better than we used to do,” said Godwin. “We've been forced to move up and we've got some good crew members. My tactician is Erik Shampain who has done tactics for a long time. This year is my first time sailing with Erik… I'm usually sailing against him. He's a good tactician and Dave Voss is a fantastic main trimmer. So those two are the key people and they keep me in line doing the right thing because they're both more experienced than I am by a long ways. I let him [Erik] tell me everything. And the first thing it does for me is absolutely allow me to concentrate on steering. I never look around me, I don't look over my shoulder, I don't know who is behind me … because I totally trust him.”

Godwin, who grew up on the docks but didn't start sailing until he was 39 years old, concluded: “We had a great day and had a good time out there. We felt like we're finally on our paces and doing the right things.”