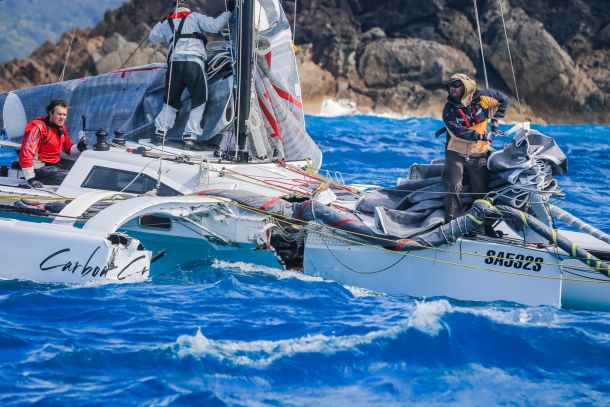 Increased winds and a nasty sea-state created drama on day four of racing at Audi Hamilton Island Race Week in the Whitsundays and two pre-start collisions brought three multihulls ashore before their start gun had fired.

Three from the Multihull Racing division were involved in two separate incidents, and Race Week has finished for two.

Peter Hawker’s lightweight Farrier F32srcx Carbon Credit from Adelaide has left Hamilton Island for Airlie Beach still watertight but with major damage to the starboard float. The South Australian trimaran weighing 1.5 tonnes had a bingle with the nine tonne Young 57 called Earthling; the eggshell made of carbon fibre against the weighty Queensland catamaran.

“It was in slow motion in a sense,” said owner/skipper Peter Hawker. “No-one got hurt; we made sure we were well back. Fortunately we were hit in an area that’s not structural. It’s a rotten way to finish the regatta; so disappointing for the crew. Things happen. That’s sailing. We were just enjoying the week….”

Carbon Credit was heading for the start line and getting ready for the start sequence running across the bottom of the start line. They went into a tack and stalled, “we went into irons and sat there. Earthling was coming down…it was unavoidable,” said crewman David Ryder.

The front half of the Farrier’s float broke in front of the beam and daylight is coming through the topside of the main hull through a hole.

The broken-hearted crew on Andrew Stransky’s home-built Seven Seas 50 called Fantasia are a live aboard family. Their collision with Craig Watson’s Jeanneau 53 Coopers in the pre-start put them out of the regatta.

All Audi Hamilton Island Race Week crews came together at the eastern course area, greeted by 15 knot average breezes, very manageable in terms of the strength but wind against tide created a nasty short wave chop that made maneuvering difficult.

For those multis not caught up in dramas, Race Week day four produced some exhilarating rides.

George Owen who drives the Grainger 10 APC Mad Max and his crew were slowed to 18-20 knots in the chop. This is compared to the flat water sailing on the opening day, Sunday August 16, when they maxed out at 22 knots, or 40 kilometres per hour. “It was pretty lumpy, with the wind against tide. We missed all the carnage,” Owen said.

Tomorrow, Friday August 21, is the penultimate day of racing at the annual regatta in the Whitsundays. The forecast is for SE winds 15-20 knots.