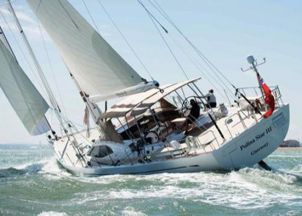 OYSTER SINKS: A 90ft extended version of an Oyster 825 sank off the coast of Spain on July 4. All five crew members were recovered.

Various press reports have suggested Polinar Star III may have foundered following a hull failure. Some reports suggest the boat hit something in the water before sinking.

According to the official Oyster Marine report on the sinking, the boat – launched in May 2014 – ‘suffered a serious incident which compromised the integrity of the moulded hull off the East Coast of Spain on July 3rd and was lost the following day’. This incident is, says Oyster, the first of its kind in the company’s 42 year history.

Divers have been down to inspect the wreck and, according to the official Oyster report, ‘the possibility of impact with an underwater object propagating structural failure has not been ruled out.’

In the Oyster report, David Tydeman, CEO of Oyster Marine, says: “Recovery of the vessel will facilitate further detailed investigation.” Unconfirmed reports suggest the boat may have capsized before sinking. However, the five crew members took to the liferaft and were then taken by a Spanish fishing vessel, Isabel y Andres, to San Pedro del Pinatar, in Murcia.

Mr Tydeman says: “Oyster has no reason to believe that any other yachts in the range are in any way at risk.”