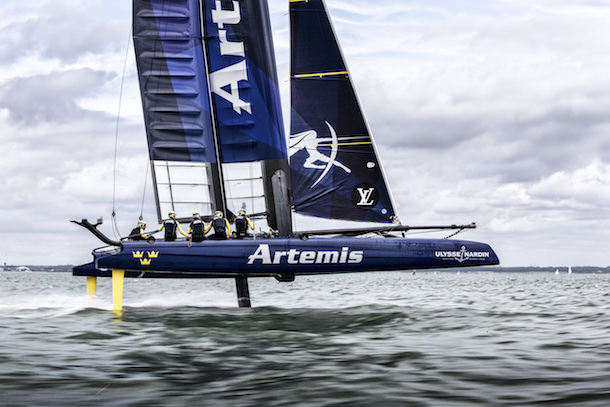 Artemis Racing has announced a squad of six sailors for the second event of the Louis Vuitton America’s Cup World Series in Gothenburg; with the final five man line-up to be announced next week.

“I’m excited to be part of the squad for Gothenburg and looking forward to getting back out on the race course. The in port racing with Abu Dhabi was great fun, but fleet racing on these boats is going to be a completely different challenge, and I hope I get the opportunity to be involved,” said Parkinson.

New Swedish recruit, Kalle Torlén, will come in for the injured Freddy Lööf, who will act as team coach for the event. A disappointment for the six time Olympian and Swedish sailing star, but Lööf’s omission opens the door for the young Swede.

“Unfortunately an injury to my shoulder will mean that I will miss out in Gothenburg. I was really looking forward to competing on home waters, so on a personal level it’s incredibly disappointing but I’m excited for Kalle, I’m sure he will do a great job in Gothenburg“ said Freddy.

“I will be taking on a coaching role for the week, and will be on hand to support him in any way I can. The event is going to be epic and I really hope that we can put on a good show for our home fans”.