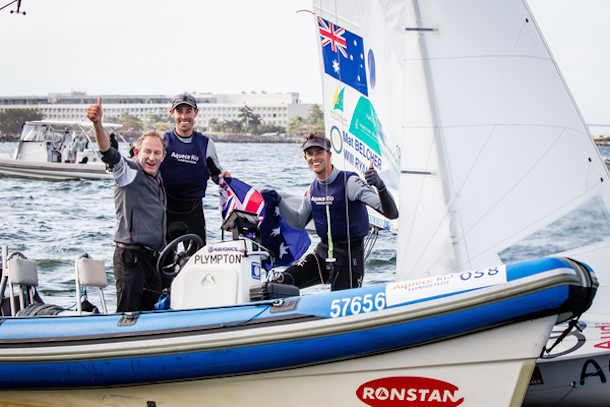 Jason Waterhouse (NSW) and Lisa Darmanin (NSW) as well as Mathew Belcher (QLD) and Will Ryan (QLD) have won a Gold Medal for Australia in the Nacra 17 and Men’s 470 class respectively at the Aquece Rio – International Sailing Regatta 2015 in Rio de Janeiro, Brazil on Saturday, 22 August 2015 local time.

Cousins Jason Waterhouse and Lisa Darmanin kicked-off the final Medal Race Day in Rio with a Gold Medal in the Nacra 17 class, which will premier on the 2016 Olympic program. The pair put together a complete performance across the 12 race series.

The Australians finished every race within the top eight and their consistency proved to be invaluable as they won over the current World Champions France's Billy Besson and Marie Riou by five points.

This makes it their third win on Rio waters after winning last year’s test event as well as the Copa Brasil de Vela in December.

On Friday (21 August) Tom Burton (NSW) won the bronze medal in the Laser for Australia in a nail-biting final race in the Laser class, which saw Burton move in and out of the medal ranks throughout the race.

Five out of the six Australian Sailing Team competing in Rio qualified for the top-ten Medal Races with Australia winning two gold, one bronze across the five classes.

And with just under one year to go to the Rio 2016 Olympic Games Yachting Australia’s Performance Director Peter Conde is satisfied with the learnings at this event:

“It’s been especially fantastic to see our youngsters and recent additions to the Team Jason and Lisa win Gold and knock-off the current World Champions at this regatta. It’s important for us at a test event to get results but what’s most important is that we have learnt a lot about the venue,” Peter Conde said.

It’s a tricky venue and we learnt a lot about the current, the wind and what racing is going to be like here. E.g. sometimes there’s no wind outside the bay, but inside the bay, they can change courses, they can reschedule races for different courses. We now have six courses here and it was important for athletes and coaches to learn about them all.

Overall we are happy with how it all went here. Obviously there were a lot of discussions about the water quality here and it still concerns us, but when we’re here for racing we need to focus on doing the job and to set the foundations for next year.”

Cousins Jason Waterhouse and Lisa Darmanin carried the yellow leaders jersey over the last two days of fleet racing and never let it go, crossing the finishing line of the Medal Race in fifth place and thus securing overall first after a consistent week.

With this result they beat current World Champions Billy Besson and Marie Riou from France into second place.

“This has been a really tricky week and we are super stoked,” said a beaming and moved Waterhouse. “I’m so proud of my cousin Lisa and we’ve been working to do this together for about eight years now and there’s one more goal in mind and that’s where we are heading. This is just an awesome way to end it with one year to go.”.

The 23-year old pair most recently won the silver medal at the Nacra 17 World Championships at the beginning of July and took home the win at the ISAF Sailing World Cup in Weymouth and Portland in June. They are currently ranked No.3 on the ISAF World rankings and qualified the boat class by winning bronze at the 2014 ISAF Sailing World Championships in Santander in September last year.

Their multihull sailing partnership stems from the days they competed together at the ISAF Youth Sailing World Championship, an event they won in 2009 on Brazilian waters.

Six years on they have their sights on another gold medal, “It’s great to win this week but we want to be winning in 348 days’ time,” commented Darmanin. “Every one of those days is going to count and we’re just going to keep working really hard to make sure we will be there then.

“We got second at the world’s this year which we were really thrilled with but we really wanted to bring home gold here on the Olympic waters. This is our first time racing in Rio and we’ve taken to it well. It’s a pretty tricky place but we’re going to be back.

“Jason kept his cool, made some good decisions. We sailed an awesome week so it was good to top it off in the Medal Race.”

There was a lot of pressure for Olympic gold medallist Mathew Belcher (QLD) and Will Ryan (QLD) going into the final Medal race with the top nine boats all in reach of a gold medal in Saturday’s double-point Medal Race.

But in the end the experience of the current World #1, London 2012 Gold Medallist and five-time World Champion Mathew Belcher together with dual World Champion crew Will Ryan paid off.  A second place behind France in the Medal Race secured them the win by two points.

It was challenging week for the pair with up and down results, including a disqualification in a race at the beginning of the regatta and the relief was tangible when they came off the water.

“This is a really good stepping stone for us. We had a really tough regatta in the beginning. We felt we weren’t sailing well and the disqualification halfway through put a lot of pressure on Will and I. It was nice that we were able to overcome that and come away with a win. There’s a lot of work to do but we’re pretty happy with how we’re going,” Mat Belcher said.

“For us the focus is about next year and there is a lot of work to do between now and then. Every day, every week and every month we’re training and it’s all about next year.”

“We’ve all learnt a lot this week and it’s been really difficult for us. We’re really happy and looking forward to a bit of rest and time with our families and then we’ll start training again.”

And asked about the secret of success of the Australian Sailing Team Mat Belcher added:

We’ve got a really good support system. The Australian Sailing Team, the coaches, our support staff and the other athletes all work together. It’s a great feeling. We feed off of each other’s success and we’ve got a lot of talent. We’re trying to prove it every day when we go out on the water and we want to be world number one.”

We’re really happy with how it’s going and hopefully in one years time we can repeat what we did today.

Belcher and Ryan have proved to be a winning combination and have been on the podium at every event they have competed at since they started sailing together at the end of 2012.

Finn sailor Jake Lilley (QLD) put in a strong last day of fleet racing and qualified for the Medal Race ranked seventh. The medals were are out of reach but in a solid performance Lilley finished ninth and the event in overall eighth.

Being the first time in Rio Lilley was excited to get the opportunity to race on the Olympic waters despite a tricky medal race.

“It was a really tricky medal race, here right under Sugarloaf, where we race. It’s very shifty, quite light and a lot of pressure differences, so it made for a tricky race. Up front, it was a really good battle for the medals and for myself, I didn’t have a great race, but it was a fantastic experience and I can really chalk it up for next year,” Lilley said after racing.

And about the week as a whole he added: “The week didn’t go quite as planned for me. I really struggled in the beginning, but I started to come good in the end. We’ve learnt a lot about this place in the last month and it really bodes well for next year’s Olympics. And I’m really stoked for my team mates Jas & Lisa, Tommy and Mat & Will!”

Lilley is the up-and-coming Finn Sailor on the Australian Sailing Squad and secured the Test Event spot after convincing performances, including qualifying the boat at last year’s World Championships, a bronze medal at the ISAF Sailing World Cup in Miami in January, eighth at the Finn European Championships, as well as sixth place at the recent ISAF Sailing World Cup in Weymouth and Portland in June. 21-year old Lilley joined the class in 2013 and is one of its fastest improvers.

Ten Australian sailors, including four London 2012 Olympic medallists, are competing in Rio in six of the ten Olympic classes in what is a key dress rehearsal at the 2016 sailing venue. Five out of six qualified for the final top-ten Medal Races.

Running from 15-22 August was the second Olympic Sailing Test Event to be held on Guanabara Bay, Brazil.