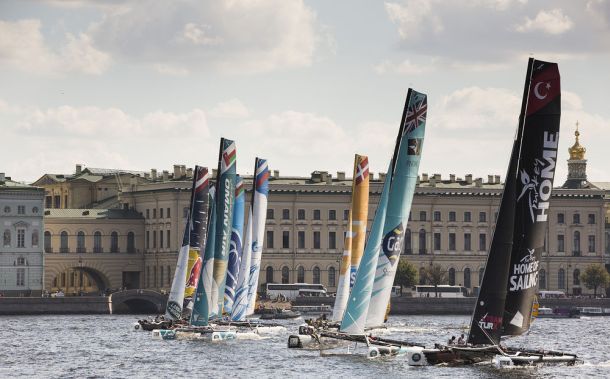 The fleet line up on the start line on the River Neva. Photo Lloyd Images.

The Wave, Muscat have been crowned victors at the Extreme Sailing Series Act 6, Saint Petersburg presented by SAP, mastering the complex conditions of the River Neva in front of huge crowds, to win the Act with a race to spare. Their fourth Act win and third consecutive victory this season sees two-times Series winning skipper Leigh McMillan and his team extend their lead at the top of the 2015 leaderboard, with only two Acts left this year.

“Everything seemed to go our way from the moment we arrived and it felt good,” explained McMillan. “It doesn’t often happen like that and it has been a long time since everything clicked in the way it has in Russia so yes, I would say this was the best event so far this year for us. If we keep on sailing well and confidently, it would be fantastic to win a third title.”

With the breeze switching from East to West the River Neva threw up a completely new set of conditions for the teams to master – something Team Turx quickly got to grips with as the top performing team of the day according to SAP Analytics.

Unfortunately for Red Bull Sailing Team the patchy eight-knot breeze and strong two-knot tide proved too big a challenge. The Austrian team led by Olympic sailing legend Roman Hagara started the day in second with a slim one-point lead over Lino Sonego Team Italia in third and the battle for second place was fierce.

The Italian’s sailed clean and posted a string of podium results to leapfrog Red Bull Sailing Team to finish the day in second – Switzerland’s Arnaud Psarofaghis and Skipper Enrico Zennaro together steering the Italian team to their first podium position in the 2015 Series and scooping up the Land Rover Above and Beyond Award for their efforts.

GAC Pindar turned on the afterburners over the last two days in Saint Petersburg and ever so nearly made it onto the podium under helm Adam Minoprio, but ultimately had to settle for fourth – a number of penalties for infringements of the race rules throughout the week proving costly to the British-flagged team.

Oman Air finish the Act in fifth place, with home team Gazprom Team Russia in sixth, who were greeted with cheers from over 23,000 spectators that lined the shore at the Peter and Paul Fortress over the four days.

Team Turx managed to pull it out of the bag on the final day, clocking up an impressive 64 points from the seven races sailed, more than any other team to pull themselves off the bottom of the leaderboard and finish the event in seventh. But bearing the brunt of The Wave, Muscat’s tactical ‘big picture’ sailing, closest rivals to the Series title SAP Extreme Sailing Team suffered a heart breaking week, finishing the Act with their worst result this year one point behind in eighth.

After 30 races and as the curtains close in Saint Petersburg, the mood of the SAP Extreme Sailing Team is one of reflection with skippers Rasmus Køstner and Jes Gram-Hansen saying it’s time to ‘regroup’ in order to hit the start line in Turkey with full speed.

With only two Acts left this season, The Wave, Muscat have a healthy advantage at the top of the Series leaderboard, with Red Bull Sailing Team eight points behind in second, and SAP Extreme Sailing Team a further point back in third. The result in Saint Petersburg was a clear statement of intent from The Wave, Muscat – Leigh McMillan is going for the treble. Next stop, Istanbul Turkey 1-4 October.