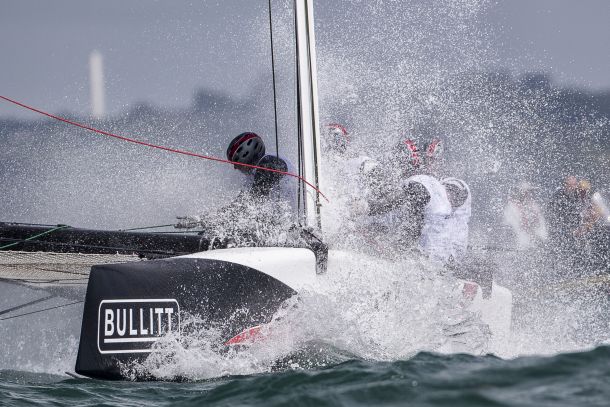 Extreme Sailing Series owners and organisers OC Sport, who recently announced a switch of racing platform to a foiling yacht, can now confirm that the Series will fast track to the GC32 catamaran to replace the existing Extreme 40 fleet in time for the 2016 season, as part of a long-term strategy and collaborative partnership with The Great Cup BV. Watch the video here.

The Extreme Sailing Series, the world’s leading Stadium Racing Series, will celebrate its tenth season in 2016 with the introduction of a fleet of foiling GC32 catamarans, which will see the world’s top sailors ‘flying’ in front of thousands of spectators at premium venues around the globe. The 2016 season will again feature a full grid of professional and brand-backed sponsored teams racing at iconic venues as diverse as Saint Petersburg, Cardiff and Sydney.

The super-light GC32 foiling catamarans can reach speeds of almost 40 knots (46mph) and, like the bigger yachts used in the America’s Cup, they appear to ‘fly’ over the water as they lift off the surface and accelerate.

The switch to foiling will also bring forward a refresh of the Extreme Sailing Series format, which will now incorporate Pro-Am racing on short courses, and open water racing where venues permit. But the Extreme Sailing Series will continue to remain true to its core proposition – the hugely successful Stadium Racing concept pioneered by OC Sport since 2007, which has changed the way sailors, sponsors, media and fans engage with sailing.

Today’s announcement of a switch to GC32s from the start of the 2016 season is part of a longer term commitment by OC Sport and The Great Cup BV (builders of the GC32s), as Laurent Lenne, CEO of the company behind GC32s, summarised: “Together we aim to develop the GC32 as a global and accessible class for both professional teams of all levels and private owners wanting to experience high speed big boat foiling and racing, and we will use the powerful marketing platform of the Extreme Sailing Series to achieve our objectives.

“The Great Cup and OC Sport are conscious of the differing needs of the different kinds of team, and we will work together to meet these in the best way possible – without necessarily trying to force that all from one package.”

The common strategy defined by OC Sport and The Great Cup aims to enlarge the market for foiling boats, to make it more dynamic, and to take events to new territories that remain of commercial importance to the long-term stakeholders of the Extreme Sailing Series and to the existing and future owners of GC32s.

Importantly for the development of the sport and the foiling market, OC Sport and The Great Cup have a shared vision of developing a global sporting pyramid, with the mid-term introduction of a series of feeder events providing a clear path to the Extreme Sailing Series, which will remain at the top. Both partners are also working on launching an annual GC32 World Cup, accessible by all existing boats.

Andy Tourell, Event Director of the Extreme Sailing Series, elaborated: “The mid-term plan is to organise several GC32 continental circuits for professional teams and private owners, who could later access the Extreme Sailing Series global circuit. It is a very exciting time for both the Extreme Sailing Series and the GC32 class. We have always looked for ways to innovate in our sport and, once again, we are breaking new ground for sailing – both through the development of such a global sporting pyramid, and by fleet racing these foiling boats on our stadium courses – which has never been done before.

“OC Sport will continue to work with the Teams and our Partners to ensure the long-term success of the Extreme Sailing Series is guaranteed, especially through our research and development efforts. The coming years will be a hugely exciting time for the sport – for the sailors, teams, sponsors, boat builders and for us as event organisers.”

OC Sport has ordered a number of GC32 boats to ensure availability for teams considering entering the Extreme Sailing Series 2016.

Teams interested in competing in the 2016 season should email entries@extremesailingseries.com for the provisional Notice of Race.