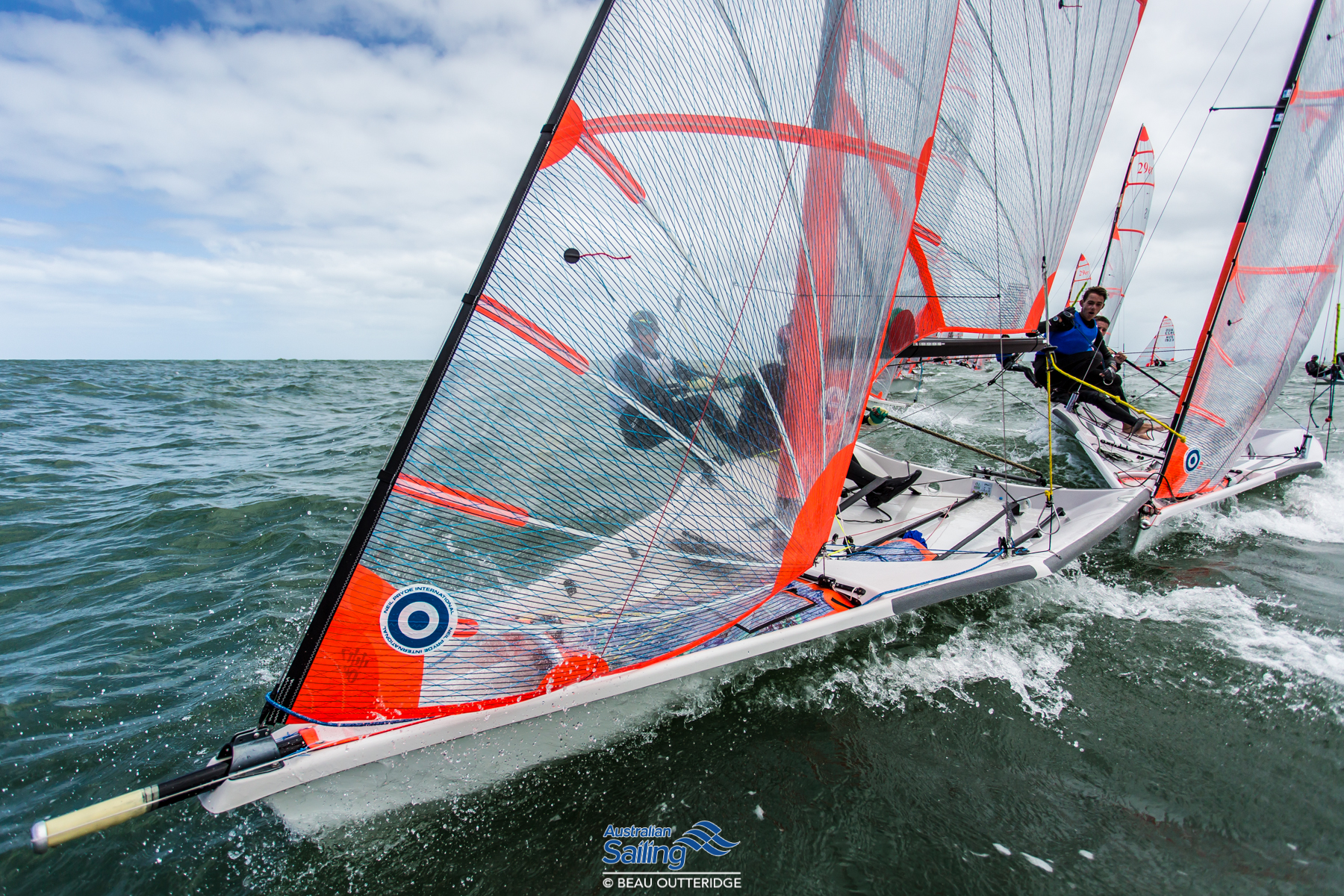 After only completing one race yesterday, the 29er fleet had the task of ensuring three races were completed today to finish the regatta.  With tricky but sailable conditions the race committee were able to pump all three races out. After two bullets Henry Larkings and Miles Davey (NSW) won the 29er boys division by 3 points. The pair recapped their day,

“We just wanted to sail a clear race and protect our placing by keeping Tom (Crockett) and Max (Paul) within arm’s reach of us for all races. It was a tough day of racing but we’re stoked that we sailed consistently well for the regatta.”

Retaining their lead for the duration of the event, Natasha Bryant and Annie Wilmot (NSW) claimed the win the girl’s 29er division. Excited for another win following their crowing as World Sailing Youth World Champions in the Women’s 29er late last year the pair said,

“We had a rough day on the water today but managed to keep our third position overall and first (in the girls). We just wanted to sail our own race today and use this regatta as training. We’re really happy to have earned the Australian Sailing Youth Team selection and look forward to representing Australia again.”

“We hadn’t had much training in the waves so this regatta has been great for our development. The event has been a lot of fun and there were a lot of boats here competing, which is great. We also didn’t have a coach so was great to have the support of our parents out there.”

Laura Harding and Eleanor Grimshaw (VIC) retained their week- long lead and took the win in the girls 420 division. The pair said,

“We’ve been training a lot so we’re pretty happy where we finished with a win overall for the girls (division). It was a hard last day on the water but we just tried to keep a top 10 result today to maintain a top 5 position overall, which we did.”

The 4.7 fleet also finished the regatta with two races today. Jack Littlewood (NSW) sailed well with a first and second placing in the tricky conditions. This had him place first overall and in the boys Laser 4.7 division.

Kristen Wadley (QLD) continued her win in the girls Laser 4.7 fleet and managed to secure a seventh overall in a highly competitive fleet.

The large Laser Radial fleet had a focus on clear air and strategy with the challenging breeze today. This added to the nail biter of a race in girl’s Laser Radial class and with only a two point separation Marlena Berzins (NSW) took the win. Marlena said,

“It was great sailing out there; I was just trying to stick to my process and normal routine and it paid off. I had a rough national championships so it feels good to come away with a win at this event.”

Although there were battles in Laser Radial boys division, Caelin Winchcombe (WA) had a good handle on the win at the beginning of the day’s racing. Caelin explained,

“I knew that I had a good chance of winning at the start of the day and after my first race I had won with a race to spare. It’s been an interesting week and I’ve learned a lot. I’m really happy with my win.”

Similar to the Laser Radial girls was the battle between Hailey Lea (QLD) and Courtney Schoutrop (QLD). After a successful day on the water yesterday and with a second and fifth place today Hailey managed to ‘seal the deal’ and take the win in the girls Techno 293. Hailey said,

“It’s been tight (between Courtney and I) all week and today was the deciding day. There wasn’t much consistency in the conditions so I was just trying to be ready for anything today. I’m really happy to have won and I’d like to thank my family for supporting me for the past nine months.”

Despite one capsize where he finished with a second, Alexander Halank (NSW) ‘scored a picket fence’ for the event. Excited about his final result Alexander said,

“The winds were pretty shifty out there but I loved the conditions. It was a great last day on the water and I just wanted to thank the other competitors, my family and my coach, Max, for their help at this event.”

After an eventful and somewhat emotional day on the water the regatta finished with the presentation in ‘The Regatta Room’ of the Adelaide Sailing Club. The presentations commenced with a welcome from Commodore, Darren McPherson, who acknowledged the distinguished guests in attendance including Sir James and Lady Joan Hardy, David and Catherine Tillett, Sarah Kenny (Vice President of Australian Sailing and World Sailing Council Member), Rio 2016 Silver Medallist Lisa Darmanin and Australian Sailing’s President, Matt Allen.

Matt Allen then addressed the 2017 cohort with a speech expressing his joy in seeing the youth sailors on the water. Matt said,

“I’m so proud of the sailors who have competed here in Adelaide; the talent showcased here has been incredible and it shows there is a great future of youth sailing in Australia with a great year ahead of us. Congratulations to all the competitors.”

The Royal Queensland Yacht Squadron will host the Australian Youth Championships next year from the 11 to 15 January, 2018.