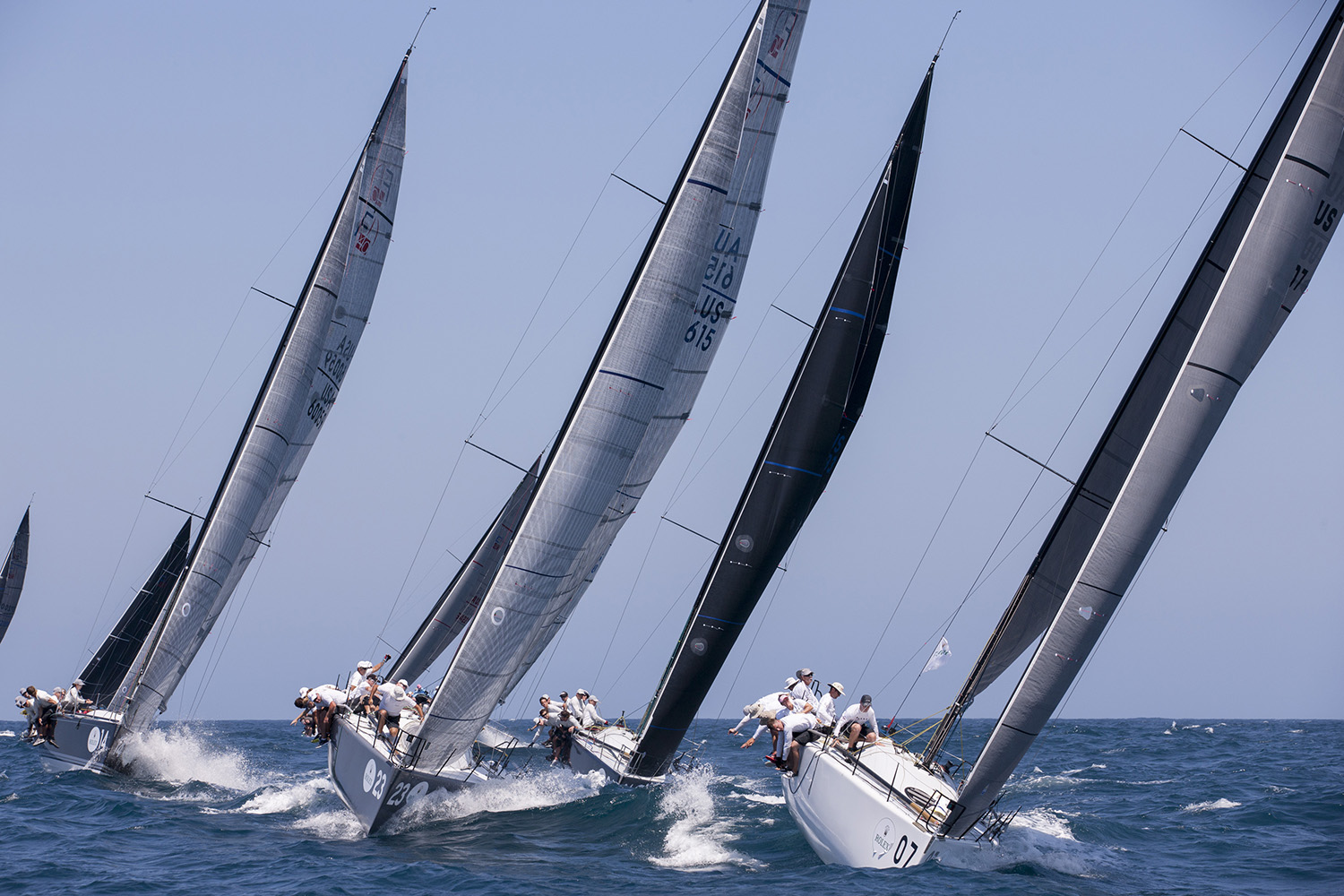 Racing on the final day of the 2016 Farr 40 Worlds. Photo Andrea Francolini.

The Farr 40 Class Association has enjoyed a strong relationship with Yacht Club Costa Smeralda over the years.

Yacht Club Costa Smeralda has hosted numerous class events, including the Rolex Farr 40 World Championship in 2003 and 2009. Porto Cervo and YCCS have also conducted several European and Mediterranean regattas for the association.

So it is fitting these two longtime allies will come together to commemorate each other's anniversaries.

Class organizers are proud to announce the 20th anniversary of the Rolex Farr 40 World Championship will be held in Porto Cervo from July 13 through 16 and will be hosted by the Yacht Club Costa Smeralda, which is celebrating its 50th anniversary.

“I think the symmetry is just perfect. This is a notable anniversary for the class and we are absolutely delighted to bring the world championship back to one of the most iconic venues it has ever been held,” said Geoff Stagg, who has managed the Farr 40 Class Association since its inception in 1998.

“We are also thrilled to be part of this year-long celebration of the Yacht Club Costa Smeralda's golden anniversary. It is among the world's greatest sailing clubs and has an impressive history of hosting major events such as this.”

Rolex returns as title sponsor of the world championship, a role the luxury watchmaker has held since 2001. Rolex has a long history of supporting sailboat racing and the Farr 40 Class Association is among its oldest and dearest partners.

“We are so very,  very thankful for the continued support of Rolex, an international company that is synonymous with excellence,” Stagg said. “For a Farr 40 owner, winning a world championship is the ultimate honor and the fact it is accompanied by a classic timepiece from Rolex is icing on the cake.”

Yacht Club Costa Smeralda has packed the 2017 calendar with a wide range of social and sporting events to mark the occasion, beginning in March with the 50th Anniversary Regatta at its Caribbean location in Virgin Gorda and concluding in November with the Atlantic Anniversary Regatta that is being held in collaboration with the Nordeutscher Regatta Verein of Hamburg.

“Of course, welcoming the Farr 40s back to our waters accompanied by our traditional sponsor Rolex will be one of the sporting highlights of the year,” Yacht Club Costa Smeralda commodore Riccardo Bonadeo said. “We are proud to have a long history of collaboration with the Farr 40 class and are very excited to host a third world championship event.”

Porto Cervo can provide perfect sailing conditions and that was on full display in 2003 when a massive 35-boat fleet did battle on the Mediterranean Sea. Italian owner-driver Massimo Mezzaroma led Nerone to victory in a wild regatta featuring strong winds that truly tested crew work and boat-handling.

So great was the experience it became a foregone conclusion the class would return to Porto Cervo and six years later the Yacht Club Costa Smeralda once again hosted the Rolex Farr 40 World Championship.

Westerly winds ranging from 18 to 22 knots greeted another large fleet and it was obvious from the outset the challenging conditions would quickly separate the contenders from the pretenders. This time, skipper Jim Richardson steered Barking Mad to victory, securing the second of three world titles for the boat based out of Newport, Rhode Island.

Memories of those two outstanding regattas were foremost in the mind of Farr 40 Class Association leaders when choosing a venue for the 20th anniversary world championship.

“Going to Porto Cervo in 2017 was a great decision for many reasons,” said Wolfgang Schaefer, president of the Farr 40 class. “The northeast corner of Sardinia, close to the Strait of Bonifacio, is probably the best area for high level sailing in that part of Italy. We loved to sail there and are very happy to be coming back.”

While the race course areas are certainly a major attraction, it is the wonderful hospitality and unmatched professionalism of the Yacht Club Costa Smeralda that has earned the continued loyalty of class organizers.

“YCCS has done many major events on the grand prix level in the past. These guys know exactly how to run world championships,” Schaefer said. “Certainly, the 50th anniversary of YCCS and the 20th anniversary of our class match perfectly. This is going to be a great regatta both on and off the water.”

Porto Cervo is known worldwide by sailors for the peculiarity of the different race conditions and the beauty of the Emerald Coast. Edoardo Recchi, sporting director for YCCS, talked about the unique confluence of factors that makes this portion of the Italian island such a spectacular location.

“As usual, the race course will be set in a radius of two miles from the entrance of the harbor with the possibility to also race inside the archipelago if the Mistral blows hard,” Recchi said. “Tide, current and sea state are always key factors that can significantly change very quickly. Normally, the first half of July is a warm period with daily sea breeze due to the thermal difference between sea and land.”

Schaefer has raced Struntje Light off Porto Cervo on a half dozen occasions and said the courses are always tricky.

“The westerly wind is coming through the Strait of Bonifacio and sometimes turning around the corner,” he said. “A sea breeze on top doesn't make it easier. A bit of current keeps the tacticians happy while the wind speed can vary from light to 25 knots. All of that keeps the racing very challenging.”

Skipper Alex Roepers and his team aboard Plenty captured the 2016 Rolex Farr 40 World Championship, held in Sydney, Australia. Roepers, who resides in New York City, returns his crew intact and is eager to repeat.

“We are very much looking forward to defending our title. We know the competition will be keen and we will have a target on our back so we will have to be on top of our game,” Roepers said.

Plenty placed sixth at the 2009 Rolex World Championship in Porto Cervo, which was the second for Roepers. He previously competed in a major Swan 45 regatta that was hosted by the Yacht Club Costa Smeralda.

“Porto Cervo is a fabulous location and I have always enjoyed racing there. It is one of the greatest venues in all of sailing,” Roepers said. “I've always stayed at the Yacht Club Costa Smeralda and it is a phenomenal facility with a fantastic membership.”

Roepers has been highly successful since bringing Terry Hutchinson aboard as tactician and crew boss. Plenty captured the Farr 40 International Circuit championship in 2015 then followed up with its first world crown and the European Championship in 2016.

“This will be the fourth consecutive year our team has been together and that consistency makes a huge difference,” Roepers said. “We have very great chemistry on the boat and the crew work is excellent. As the helmsman, it gives me a lot of confidence knowing that most maneuvers are going to be flawless.”

Enfant Terrible, the Italian team led by skipper Alberto Rossi, will certainly be a contender at the 2017 Rolex Farr 40 World Championship. Enfant Terrible was runner-up at the 2016 European Championship in Ancona, Italy and won the D-Marin Sibenik Regatta in Croatia.

Schaefer had a solid 2016 season, sailing Struntje Light to a second place finish at the D-Marin Zadar Regatta and a third place in Sibenik.

Last year's circuit was bolstered by an influx of new boats from Italy with Rush Diletta (Mauro Mocchegiani), Pazza Idea (Pierluigi Bresciani), Sempre Avanti (Carlo Naibo) and MP30+10 (Luca Pierdomenico) all having their moments in the sun.

“International interest in this year's circuit and the world championship is high. We expect to have multiple boats from the United States and Australia,” Schaefer said. “The Italian fleet is quite strong and we are hopeful of attracting boats from  several other European countries.”

Legendary principal race officer Peter “Luigi” Reggio will manage the on-water activities. This will mark the 13th time Reggio has served as PRO for the Rolex Farr 40 World Championship and he has run many events in Porto Cervo with assistance from the Yacht Club Costa Smeralda.

“Edoardo Recchi and his race committee team are wonderful to work with. I've done many varied events with them over the years and they are top-notch,” Reggio said.

Yacht Club Costa Smeralda is hosting 15 major regattas, including three world championships, in 2017. Recchi said participating teams can rest assured that operations on and off the water will be of the highest quality.

“Luigi Reggio is the absolute best and he will have myself and the usual Sardinian Brigade at his disposal,” Recchi said. “Our club has been the Secretariat of the European fleet for years and many of our members, including the current commodore, have raced in the class. We know the caliber of racing the Farr 40 class expects and we intend to deliver it.”