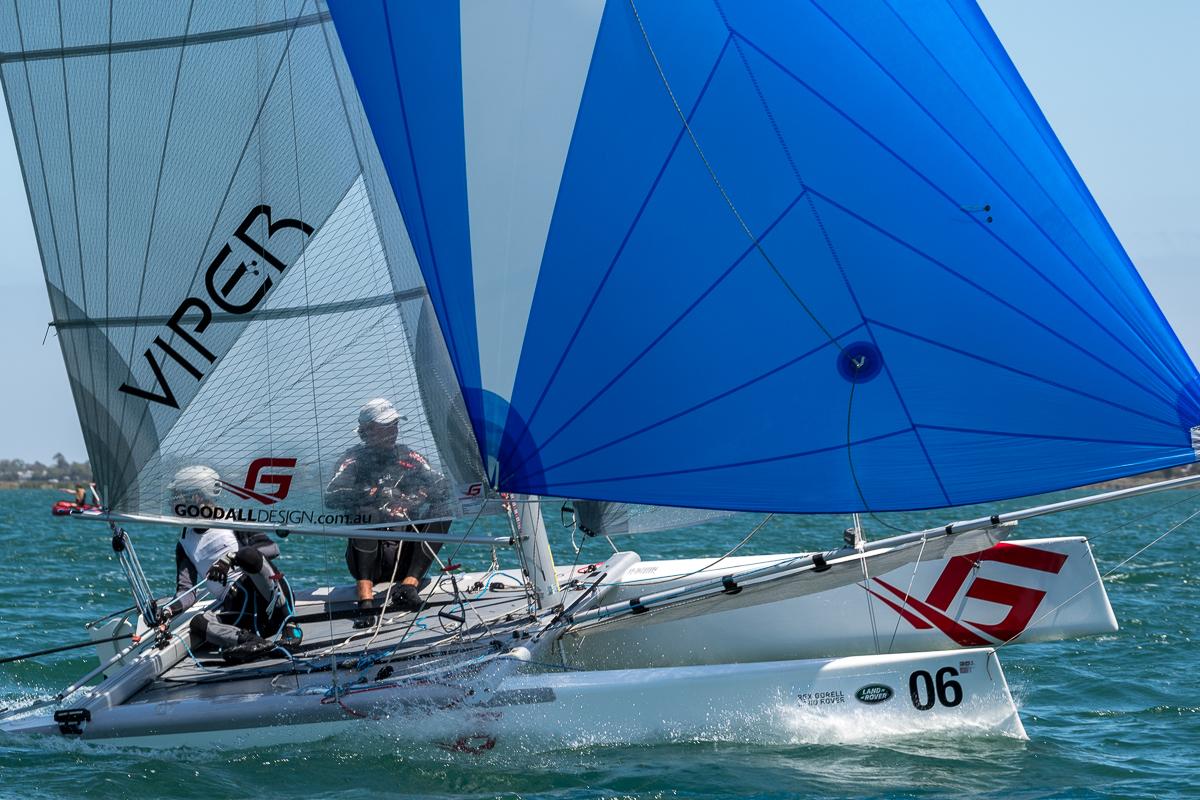 They led from the outset and at the conclusion of the Viper Worlds 2017 Australians Jack Felsenthal and Shaun Connor (Charter World) beat the immediate past French world champion and took out the series by nine points.

With six wins from 11 starts and two drops in play the pair’s worst score was a third, showing that consistency across a mix of conditions in the 11 race series presented by Rex Gorell Land Rover was paramount.

The new world champions, sailing for Gippsland Lakes Yacht Club and Royal Brighton Yacht Club, surprised themselves with the result. “We thought we’d be top three but we didn’t think we’d do this well,” Felsenthal admitted. “The points were reasonably tight going into the last day then heading in to the last race we knew we were safe but we wanted to go out and finish on a high note, and we got the win.”

A two day delay waiting ashore in high winds on Friday and Saturday stretched into day three though for the opposite reason, a lack of steady breeze on Geelong’s Corio Bay. Twenty-two crews representing five countries plus race management officials drifted in the sun for close to four hours prior to the first gun of the day, on Sunday January 15, 2017.

”We were trying to stay focused and deal with the heat out there. Waiting around drains you a lot but we knew we’d get racing in today,” Connor said.

Felsenthal praised the race committee for their professionalism over a difficult six day series and he and Connor were delighted to accept a Bausele timepiece each, presented to the new world champions at the final trophy presentation.

Normally Felsenthal and Conor race in different classes so to combine at a world series on the Viper catamaran as they did, with minimal training, was an impressive feat. Felsenthal will hang on to his Viper and work towards the F16 worlds in January 2018 at Royal Brighton Yacht Club plus continue his 420 sailing while his crewmate returns to a 49er skiff.

Second overall went to the Frenchmen Emmanuelle Le Chapelier and Theo Constance (Sailing Team Catamaran), the latter commenting, “Jack and Shaun had a really good regatta, we are happy to finish just after them.”

Third overall by six points, Daniel and Nathan van Kerckhof (Send It Marine), would have liked to tick off more of the scheduled 15 races to have a better crack at the French and young Aussie teams.

“It was an interesting series,” Nathan nodded. “We kind of wish we’d got a few more races in in heavy air but we got a full series in and Jack and Shaun sailed really well. We look forward to the F16 worlds next January for a bit of redemption.”

Three days ashore due to Thursday’s layday then two non-racing days in winds too strong for the class meant a lot was riding on the closing day, both for competitors and race committee. The sou’wester had all but disappeared by the 1100hs scheduled start then over the next three hours the breeze teased until just after 1400hrs when finally the local sea breeze arrived with conviction.

With a 1555hrs time limit race officer Greg Sinclair and his team of close to 20 volunteers banged out three races in quick succession, the last start in freshening sou’east winds 15-20 knots just four minutes before the cut-off.

Simon Dubbin from the Australasian Viper Association thanked the Royal Geelong Yacht Club and the race committee for a fantastic regatta.

RGYC will tidy up in the coming days then re-set for the annual Festival of Sails beginning January 21 when close to 300 keelboats and off-the-beach classes take to Corio Bay and ashore a carnival rolls out until January 26th, Australia Day. The arrival of the huge 174th Melbourne to Geelong Passage race fleet on the afternoon of Saturday 21 signals the Geelong major event open for sailors and visitors.