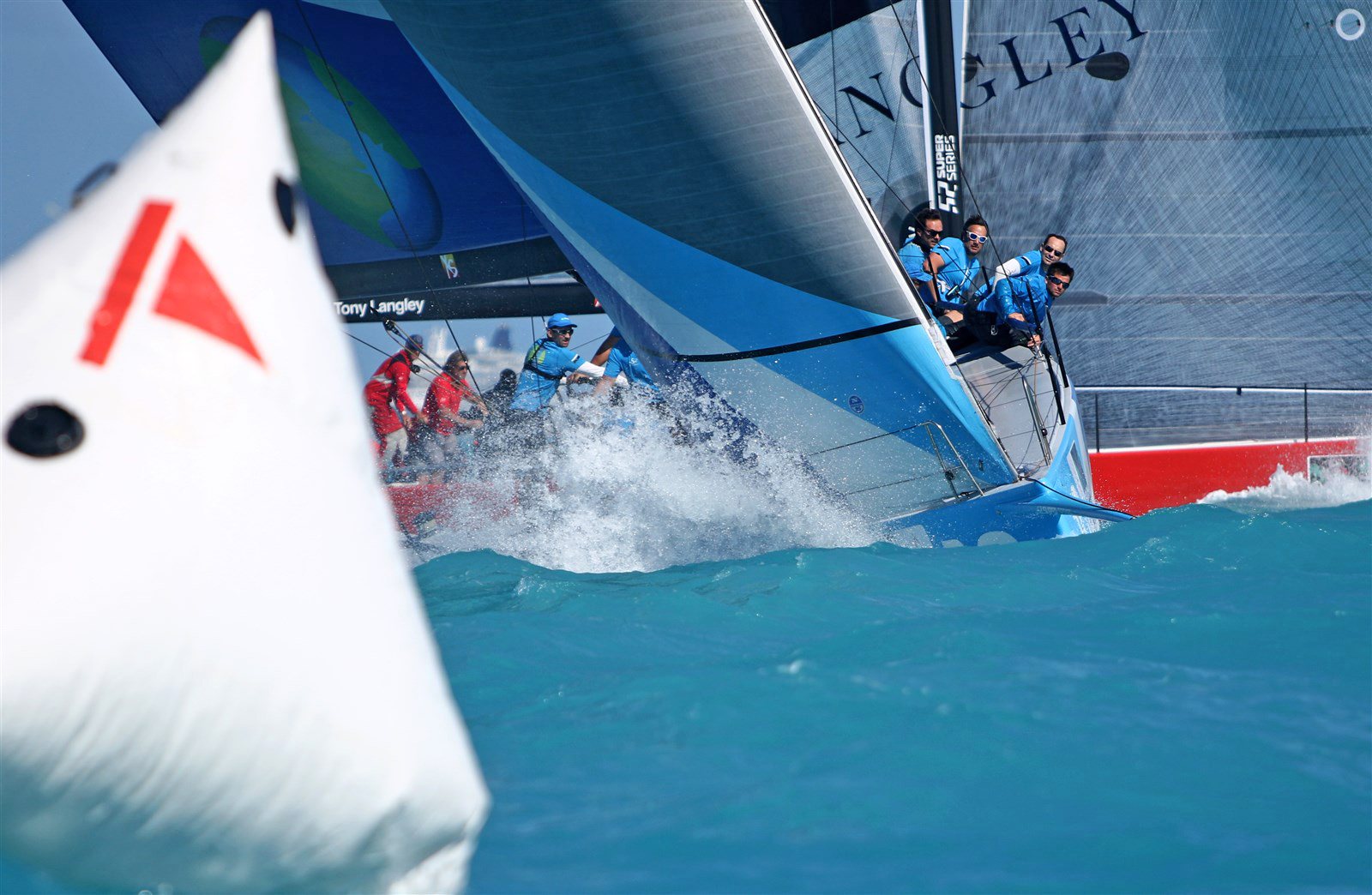 (Monday 16th January, Key West) – For German owner-driver Harm Müller-Spreer and his international crew on Platoon, the 2017 52 SUPER SERIES is off to the best possible start. Under clear blue skies and in a meaty 15- to 20-knot breeze, the Platoon squad handily won the first two races of Quantum Key West Race Week, the first of six events in a nine-month 52 SUPER SERIES season.

Harm Müller-Spreer has been around the 52 SUPER SERIES for long enough to know that for a team that only just missed out on third step on the 2016 season’s podium, a double bullet day may be a dream opening to the season, but he is not drawing too many conclusions. He is, however, especially pleased to see the winter changes to the boat, rig and crew line up mean pay an early dividend.

“It was a stunning day. What [a difference] small changes make. We changed the keel over the winter because we learned in the last season that we are not very good in the pre-start when we are in a slow mode; that made a huge step forward. We increased a little bit the range of the keel and then we changed the rigging and made a few crew changes, so it worked out.”

On a high octane opening day of the season when both of 2016’s top boats made at least one lackluster start, no other team proved able to come close to matching Platoon’s consistency. Takashi Okura’s Sled is second in the overall standings, with 7 points, while the 2016 runners up, Azzurra, with Guillermo Parada at the helm, is in third with 8 points. Defending series champions Quantum Racing, and Rán Racing – last year’s third place finisher – are tied on points for fourth place with 10 apiece.

Platoon open with a bullet.
Platoon scored the first win of the nascent 2017 52 SUPER SERIES season with a patient race on the choppy, aquamarine waters off Key West. Led by tactician John Kostecki and a team of veteran professional sailors, Platoon had a strong start but favoured the left side while other boats made some gains on the right, particularly Takashi Okura’s Sled, which led Platoon around the first mark. Quantum Racing snuck into second at the leeward gate, but both Sled and Quantum picked the right side of the second beat while Platoon took the left side. Halfway up the beat, Platoon and Sled converged, locked in a duel for the lead. Platoon got the better of that battle by the slimmest of margins, rounding a scant seven seconds ahead.

“We had a real good second beat.” Said Platoon tactician John Kostecki. “It was pretty shifty so we were able to get that right and that go us out in front.”

On the final run to the finish, Platoon took advantage of the clean water and wind to extend away for a 40-second win. Sled held on for second with Quantum Racing in third. Niklas Zennström’s Rán Racing, like Platoon, had a solid start, but was unable to work through on the first beat as successfully, ground back to from eighth around the first mark to claim fourth. In fifth was Austin and Gwen Fragomen’s Interlodge, sailing her debut race and showing that with some further refinement it will be a boat to watch this year.

“The piece of equipment’s good enough to have a really good regatta,” said Andy Horton, tactician for Interlodge. “It’s just about us getting all we can out of it. We don’t have a lot of time. This might’ve been Day 7 the boat’s ever sailed. Every other team here has been sailing for two years with the same boat, same mast. They’re doing the refinements and we’re doing the broad strokes, trying to get it right. We’re very pleased, we just have a lot to do.”

The 52 SUPER SERIES fleet pressed hard to the line for Race 2 of 2017 Quantum Key West Race Week and some paid a heavy price. Three boats were called over the start line early —Gladiator, Quantum Racing, and Bronenosec – while Interlodge was flagged for a foul and forced to take a penalty turn. Among those getting away cleanly, and taking advantage of the open water on the left side of the course, were first-race winners Platoon along with Jean Luc Petithuguenin’s French team on Paprec, and Azzurra. At the top mark, that trio led the way.

Quantum was in position to build the kind of comeback that has become one hallmark of their successes, but fouled Rán Racing at the mark while tacking onto the starboard layline and found itself in second-to-last after the penalty turn.

Riding a wave of confidence after Race 1, Harm Müller-Spreer’s Platoon showed both speed and smarts the rest of the way en route to a 48-second win to compose their perfect start to the regatta. Azzurra bounced back from a disappointing first race and took second, Andy Soriano’s Alegre took third, also on the bounceback after they fouled their kite at the leeward gate in the first race. Bronenosec, followed that pattern too, following their indifferent start in Race 1 with fourth. Sled, with Hamish Pepper calling tactics, rounded out the top five. Champions Quantum Racing was able to grind their way back to seventh. That is not the sort of result the defending champions expect, but impressive given the mountain they climbed after compounding their OCS with a penalty at the top mark.

Platoon’s tactician John Kostecki who joined the program for the last regatta of the season in Cascais explained:

“In the first race, we had a real good second beat and that’s how we passed and got ahead. It was pretty shifty so we were able to get that right and that got us out in front. Key West really is perfect. Perfect. It’s incredibly nice, warm, good breeze, shifty winds, and a great racecourse.

We had really good starts today, pretty good, consistent boatspeed, good boat handling, and somewhat went the right way most of the day. When you do all of those things right it means you do pretty well in this fleet. It’s hard getting them all right.

We only have one crew change. No majors. But I’m relatively new as well. The last regatta last year was my first event with this team. They are guys I put a lot of miles in with. That helps. It’s easier to make decisions because everybody is more or less on the same page because you’ve worked together for so long. You have a lot of trust in your guys so it’s pretty easy to make decisions on and off the water. The second you finish the race you’re working on the next race, even if it’s the next day.”

“It was pretty hard to figure out. Today was a lot different than the past days because the wind was a lot further right in general. In general the left paid, but you could make some good gains out on the right. Sometimes the rhythms were 5-minutes and sometime there were 10-minutes in-between the shifts, pretty tough sailing.

One thing is I’ve done a lot of sailing with Germans. Harm is German, so I don’t know, I can interact easier and I think he understands me and we get along quite well. It was pretty seamless; it was amazing. I’ve been working with the Illbruck family for many years, I sailed with Michael Illbruk’s father Willi way back in the 90s and that’s where I started sailing with German owners really. It’s been great.

It’s just one day. Tomorrow’s going to be another day. There’s great teams here, a lot of talent and I think we have to enjoy this because tomorrow is going to be a tough day.”

“We had two good starts and we made a right choice for the wind direction and that worked out. But in general the boatspeed is perfect. What should I say, I got a phone call this morning from home and it’s -8°C. The sun’s shinning, but it’s a little bit different to Germany. It’s good here. A pretty nice spot. This is a stunning fleet and all these guys are so good. If you are top five all the time you are lucky, and then you are there.”

“It’s always nice to get out there and come back in and you’re near the top of the leader board and put in two solid races. The guys did well. There’s lot of differences [from last year]. We’ve changed a few things. A lot of the boats last year made some nice gains in the offseason [before the 2016 season] and we got a little bit behind the eight ball and this offseason we played the game a little bit harder and tried to catch up and I think we’ve caught back up again.

In the second race there were a few boats that were over, a few of the key boats. That helped out things. Then there was an infringement at the top mark and that let the top boats open up a little bit. Keeping the boat going fast and on the wind and Mr. Okura driving well today and Don and Robbie and Honda playing the sails well today.

“[Our scoreline today] was reasonable. We had a tough second race. First race we were probably on the wrong side of the first beat, so we got in the pack and ended up fifth in the end. The second race we got a penalty at the start so we did a quick circle. Right back into it, maybe six or seven [at the first mark] and then the next beat around we were five at the next windward mark and had a little twist in our kite and went back a bit. Then we gained another couple [before the finish]. Normal new group of people, new boat stuff. The piece of equipment’s good enough to have a really good regatta. It’s just about us getting all we can out of it. We don’t have a lot of time. This might’ve been Day 7 the boat’s ever sailed. Every other team here has been sailing for two years with the same boat, same mast. They’re doing the refinements and we’re doing the broad strokes, trying to get it right. We’re very pleased, we just have a lot to do.”

The Quantum Key West Race Week will take place from 16-20 January, with races starting at 11:00 every day. Track the boats via state-of-the-art Virtual Eye at www.52SUPERSERIES.com/LIVE or via the app.