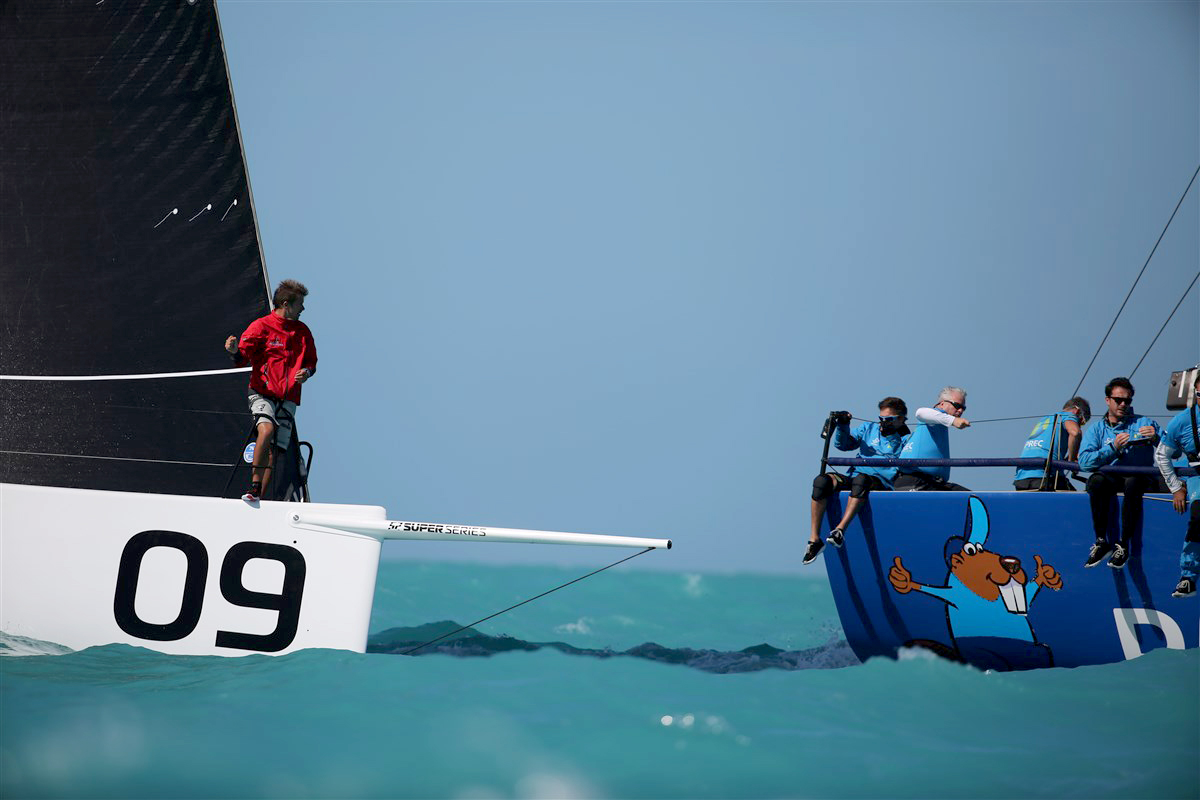 (Tuesday 17th January, Key West) – Even among some of the top teams in the 52 SUPER SERIES, the world’s leading grand prix monohull circuit, nerves and elements of self-doubt had a negative effect on Monday, the first day of the new season and the opening races of the Quantum Key West Race Week.

While Harm Müller-Spreer’s Platoon opened with two confident, well executed wins, several among the 11 TP52 teams racing on the azure waters of the Florida Keys did not manage to start their season on their A-Game.

But after enjoying a life at the head of the fleet on Day 1 the Platoon team spent Day 2 slugging it out in the trenches for a pair of sixths. A four-race total of 14 points keeps them in the lead, but only barely. Quantum Racing’s win in Race 4 lifted them to second, a point back. Despite an eighth in Race 4, which could’ve been worse, Azzurra is third with 19 points. Bronenosec has the same total, but sits fourth on tie break. Provezza, which won the day with a pair of seconds, is fifth.

Hard, honest debriefs turned around the fortunes for some such teams today. Top scoring boat over Tuesday’s Races 3 and 4 was Ergin Imre’s Turkish-flagged Provezza. Their lacklustre first day, an eighth and ninth, was boosted by two hard-earned, well-won second places in perfect racing conditions. So too the defending champions Quantum Racing, with owner Doug DeVos steering, eliminated the errors that cost them in the second race on Monday, and returned a solid 4,1 for the day to finish just one point off the leading 14pts tally of Platoon. And Tony Langley’s Gladiator bounced back from a 10,10 first day of the 2017 term, to boost their crew’s morale by winning the first race of the day.

Platoon, with John Kostecki calling tactics, were not quite able to impose themselves as they did in Monday’s dream start. In the first race they did not start cleanly enough to get to the favoured early left side of the beat but rounded sixth and stayed with that to the finish.

In the second race they staged an incredible comeback from tenth at the top mark first time up, getting themselves to fourth down the last run, only just losing out to Interlodge and Rán Racing in the final sprint to the finish line. But for losing these two boats downwind their lead at the top of the table might have been more than the single point they now have in hand over the ascendant Quantum Racing.

“After two days of racing to be still on top of the table, we are quite happy.” Kostecki summarised, “It was less shifty today and more important to get good lanes and get off the start line. Today we got tangled up just a little bit.”

The third race of the regatta followed much the same pattern as the first two, raced Monday.

With the steep Key West chop kicked up by the brisk 15-16kts ESE’ly breeze adding to the fun downwind and requiring accurate driving upwind, Interlodge started briskly off the pin end of the line.

With Ian Walker steering and Andy Horton calling tactics, the brand new Interlodge showed excellent speed to the left of the first upwind and were able to lead Gladiator and Azzurra around the top mark.

Gladiator hung further to the right side looking downwind and eased through to lead by the first gate from Provezza, who also had a blistering first run.

Interlodge had to stop during the second upwind when they lost crew into the water when a lifeline failed, and consequently dropped way down the fleet.

Azzurra and Bronenosec both tore their kites on the last run. Azzurra were challenging for second but they took time to replace their damaged sail but held on to third, while Vladimir Liubomirov’s Bronenosec lost out to the hard-charging Quantum Racing, who finished third.

With two wins and a sixth place, Platoon still lead the regatta by three points from Azzurra with Quantum Racing three more points behind in third.

Race 4: Quantum Racing’s First Win of 2017
After one general recall, Race 4 officially got underway in much the same conditions as the previous three, 15 to 20 knots from the east southeast with short choppy seas and brilliant sunshine. Once again there was a fierce battle for the pin end with Azzurra and Sled both double-tacking inside of 30 seconds, Quantum Racing sliding down to join the fray.

Sled came out the worse for wear and was forced to bail onto port tack while Azzurra held off Quantum and edged out to an early lead in the battle for the left side. However, unlike in the previous three races, the left wasn’t the key to the first beat success.

Working the right side were Provezza and Bronenosec, and those two boats led around the windward mark, with Sled in third and Quantum Racing in fourth. It was by far the most competitive rounding of the regatta, with the entire fleet passing the mark within a minute of each other. Azzurra and Paprec went head to wind to just squeak around the mark, but lost crucial places in the process.

After a trio of mid-fleet races to start the regatta, Doug DeVos’s team on Quantum appeared determined to make a statement in this contest. They had the spinnaker drawing before the transom cleared the offset mark and blazed down the run to move into second behind Provezza.

Sled’s race came apart at the leeward mark as they held the drop until the last second and wound up sailing over the spinnaker. By the time they untangled themselves, the fleet was out of reach.

Quantum and Provezza worked the right side of the second beat and were bow-to-bow around the final mark. Another aggressive set by Quantum Racing earned them a few crucial metres and they were able to hold on for the win with Provezza second and Bronenosec third. Platoon, after rounding the first mark in 10th, finished sixth.

“We had a discussion on the way out about how badly we had done the day before and set our goal for ourselves to back each other and be a team and to rebuild our confidence and get back on the horse. The team did an awesome job. We sailed the boat really well and got some good results. It was great. We realised once we analysed everything yesterday that there was quite a lot going on out there. We doubted ourselves and thought it was the boat’s problem, but it wasn’t. Knowing that there were plenty of opportunities for gains and losses out there, we just trusted ourselves, we sailed the boat well and Tony [Rey] did a really good job on tactics putting us in the right spots. It came good.”

“It was a real glamour day out there, the breeze, the waves, the water colour. What could go wrong? We really had a great day. We were able hang tough in the first race and win the second race, so we are thrilled with the day. We found clean lanes and downwind we were fast. We find we sail a little higher [downwind] and just let the boat go. We just get the boat ‘on the step’ taking advantage of the breeze and the waves, and have Terry and Lorenzo tell me where to keep the boat to keep it fast and it is a lot fun. Not only is it fun but the boat is going so quickly. It is going well with Bora. He is fitting in, every day he get a little more comfortable and he has been adding value since Day 1.”

“Today was a good day. After two days of racing, to be still on top of the table, we are quite happy. It was less shifty today and more important to get good lanes and get off the start line. Today we got tangled up just a little bit.”

The Quantum Key West Race Week takes place from 16-20 January, with races starting at 11:00 every day. Track the boats via state-of-the-art Virtual Eye at www.52SUPERSERIES.com/LIVE or via the app.