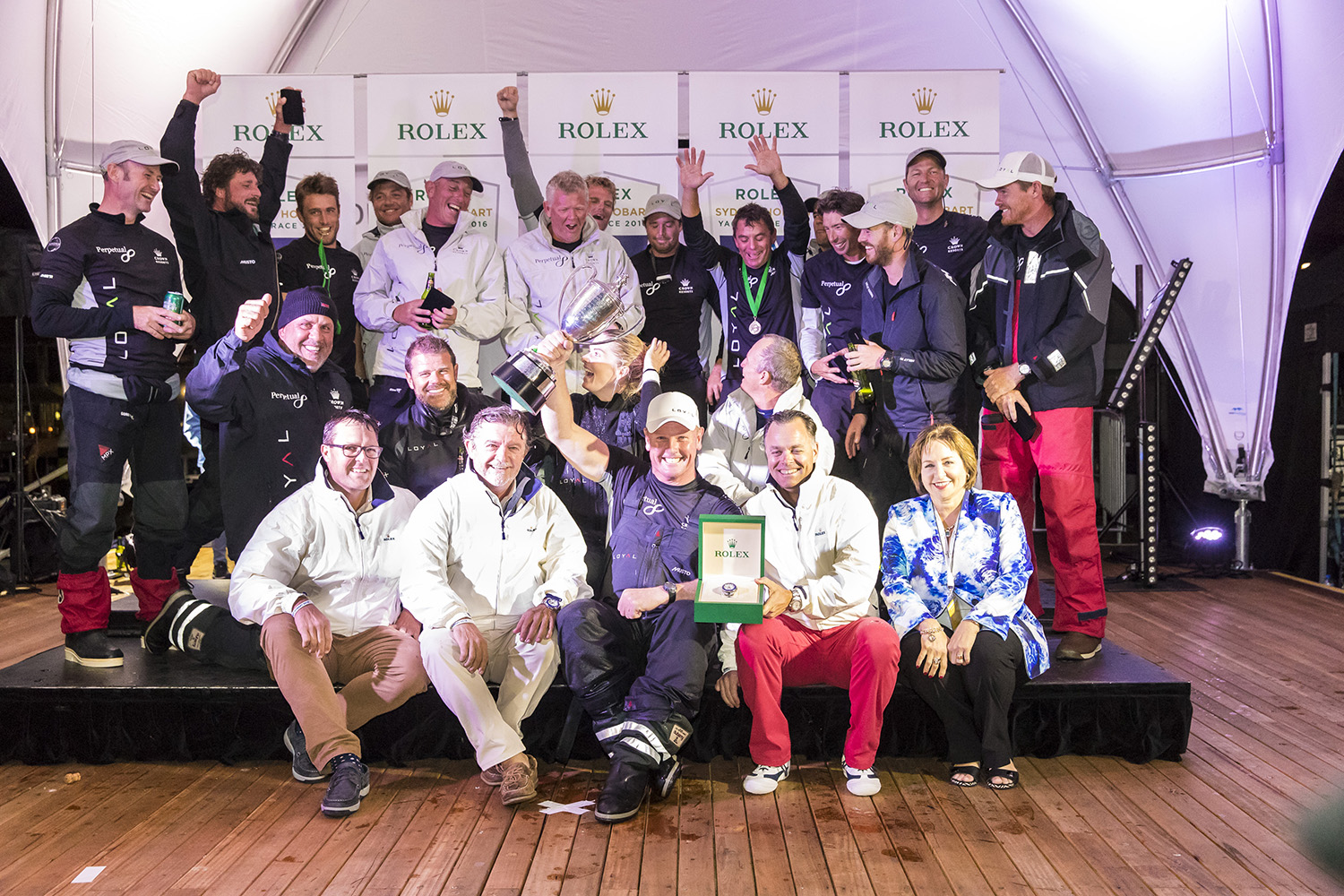 Who would have ever thought that you could start a S2H yacht race on Boxing Day [26th December] and be under TASMAN LIGHT the next day [27th December]?

I could not conceive that, not on this yacht as we have not finished 2 years in a row, 2014 and 2015, the HULL failed on both occasions forcing us to retire which, is absolutely gut wrenching, turning away in these races and going home is the most difficult option ever, you are giving up due to failure, that word is very hard to use.

When we failed in 2015, we very nearly let her go, sell her, so as to give someone else a shot or use her as a donor yacht for a new build and use the Rig, Rams and any other parts which could be of benefit to a new program, sad but reality is in your face at that time and what to do is imperative to the whole program.

January through to September of 2015 it was NO GO and just get rid of it, we are done, this yacht really has had her day and she just can’t aim up unless we bullet proof the entire forward section which will just be too hard and too heavy, that was it, we are done!

My mobile rings on the 2nd of September 2016 at 22:30 and it’s Bell? I think to myself, that’s weird, this late, I answer the call and Bell is on the gas with Calligeros and they have decided that we just MUST go again but, they both are clueless as to what has to be done and now, for one reason or another, my balls are on the block to get this thing ready and with no time, 117 days. There are readers of this magazine who know that that is just not enough time when you consider, the yacht is still in it’s broken form and still in the water.

Righto, we have got a bit on so, lets set a plan. Call Dovell and put together a repair schedule, call Joe de Kock at Midcoast Boat Yard in Newcastle and get out of water, chop her up and rebuild the bow along with all the other mandatory requirements so as to have GL and ISAF sign off.

Call Clarkey at Sydney Rigging and he put Craig Garnett straight on it, Rig out and send all that needed to be tested away, rebuild the Rig and have it ready for re-stepping by end of October, those guys are just unreal, quick, accurate and cost effective. There is a lot to do on these big boats as the loads they must endure are off the Richter scale and we are in a position where we can’t miss. We also had to sort the Boom, as it was severely damaged after the Hobart Race 2015 attempt. Southern Spars came to the rescue and with Midcoast and Sydney Rigging on the ground here, all was sorted.

Our repair plan was now in order, we had all the right guys in the right places and all that needed to happen was to complete which, in the end, if you have the right people involved, is a given.

We completed in mid November and sailed back to Sydney without issue. We now needed to set a crew that had the belief, skill and happy disposition so as to have some fun and be content with, it would be what it would be and whatever came our way, we would deal with that.

I had a call from Bradshaw Kellett and he was looking for a ride for his 25th and seeing I took him on his first S2H back in 1991 on Condor, it felt right, he was very thorough and did all that was required, and some. I put him with Ty Oxley and between them all systems fell into place.

We are now at Rose Bay Marina, ready to go but we still needed time on the water with whoever our race crew would be. We had lined up Tony Mutter to put together whoever he thought would be the best for what we were trying to do and to that end, he put up Pablo Arrarte, Antonio Cuervas Mons, Nick Dana, Rives Sutherland, Chris Maxted and Mal Parker. These guys were UNREAL, happy, skilled and just fitted in with whatever they were asked to do, they did it all, trim, steer, bow, pit, cook, clean, whatever, they were true pro-sailors, everywhere people.

They arrived on the 12th of December and we had a quick sail whilst trying the new A3 that, Alby Pratt put together from North Sails and it was without fault. We enticed Wade Morgan to sail with us for 2 days so as to ensure our systems were explained to the new crew. This was premium help as he could not sail with us due to a commitment to ICHI BAN and to have him with us even though not for the Great Race was invaluable. We then sailed in the SOLAS Big Boat Day which was flawless and showed once again that the Big Black Boat was a monster up-wind when Slingsby and Bell were at the Helm, she really does just eat boats up-wind.

We sailed another 6 days which included an overnight 250 nautical mile passage so as to qualify the yacht and that also was almost flawless apart from having an issue with the main which saw us damage the leeward helm and the main but, looking on the bright side, that was the one we had to have, so to not have one going South?

She was back in her berth on the 20th of December and that is where she would stay until the big day, she needed to be set, to be clean, sign written, packed well and tended to so she was the best she could be and ready for this next attempt in this iconic World renowned ocean race, very nervous moments ahead but, she was the best she had ever been, she was ready.

As we moved towards the day, varying opinions were offered by many regarding weather, Tom Addis our carefully chosen Navigator, had a rational calm view which in then, was dealing with whatever was on us on that day, we would get her under that and, push her to infinity and beyond. Slingsby and Bell drove her as if they stole her at the start, up hill she is a man-eater and she showed that. We turned at the seamark and Flano had that well under control except for the A2 furler having one that put him on the prod for an hour and a half smoking down wind to make good, he is just a freak! Once that was sorted, we were on our way.

She was happy, she was quick, and no one really gained on us that easily, she was not in her best performing angle of attack but she felt nicely balanced. The breeze built and eventually the Red Shirts went through us and we remained insight of them at all times. We did sail at slightly differing angles remaining though in the same system of weather. We gybed so as to begin to attack them and push them as best as we could which, on the board we were on, we were gaining on their lead by 1.5 to 1.8 nautical miles an hour. The actual recorded times on the tracker has them with a 5.0 nautical mile lead after 19 hours and 10 minutes of race time and then after 19 hours and 50 minutes, 40 minutes later we had taken 1.1 nautical miles out of them in 40 minutes, they only had a lead of 3.9 nautical miles, they knew we were running them down and pushing them harder than they had ever been pushed before.

The Red Shirts are some of the most competitive sailors on the planet and they will never give up, ever, the only way they would stop would be if they were knocked out and knocked out she was. You could believe Rob Mundles headline of Wild Oats denied record attempt but, the fact is at that time, we were going through them and towards a system which would end in an upwind battle that they would be the first to admit, upwind LOYAL is hard to get over. Mundle is a Red Shirt away so what else would he say.

When we saw them radically stop, we slowed down and contacted them as we thought they may have lost someone over the side as we wanted to help but, they explained their issue and their intention and we just got on with our race which was not all in the bag as Giacomo was right up our herbie and that was quite intimidating. We thought Scallywag would have been closer but for one reason or another, they were not, Giacomo was now pushing us and we needed to pay attention.

Addis was all over it, we were 20 odd hours in and he had not yet slept and still on the pace with all we had to deal with. Bell, Slingsby and Pablo were steering in daemon like style, which in those conditions was fantastic. The A2 had a small area on the luff which was beginning to let go and we discussed getting it down and go to the A7 but, in the end after discussions with Alby Pratt, he was confident but anxious and the call was made by Bell to push her outside of her comfort zone as Bell said to us all, we are going for it boys, balls to the wall here, we will only have this time to set a record time so, lets go!!!!!

At around 22:00 on the night of the 27th, we were under TASMAN Light, WOW, how could that be but, its real, we are here, we just need to get across Storm Bay with wind and then from Iron Pot to the finish. We all knew how fickle the breeze could be into Hobart and as we turned into the wind but still reaching under the J2 and the Solent with a full main on starboard, she was in her element. The further we went, the firmer the breeze got and we remained on starboard and just hardened up on the wind on starboard so to clear the Iron Pot and then to the finish. In the last mile, the breeze weakened but not completely and we crossed at 02:31.20 which now stands as the new record, 37 hours, 31 minutes and 20 seconds.

The amazing Hobart community was there to witness this history-making occasion. Friends, Family, Sponsors were all there, it was just unbelievable, we had done it, we had risked all against a position of failure in 2 previous years and now not only did we win line honors but set a race record which could prove to be tough to beat again as the weather played her part in this momentous occasion. To quote the famous rugby league coach Jack Gibson, “ding dong, the witch is dead”.