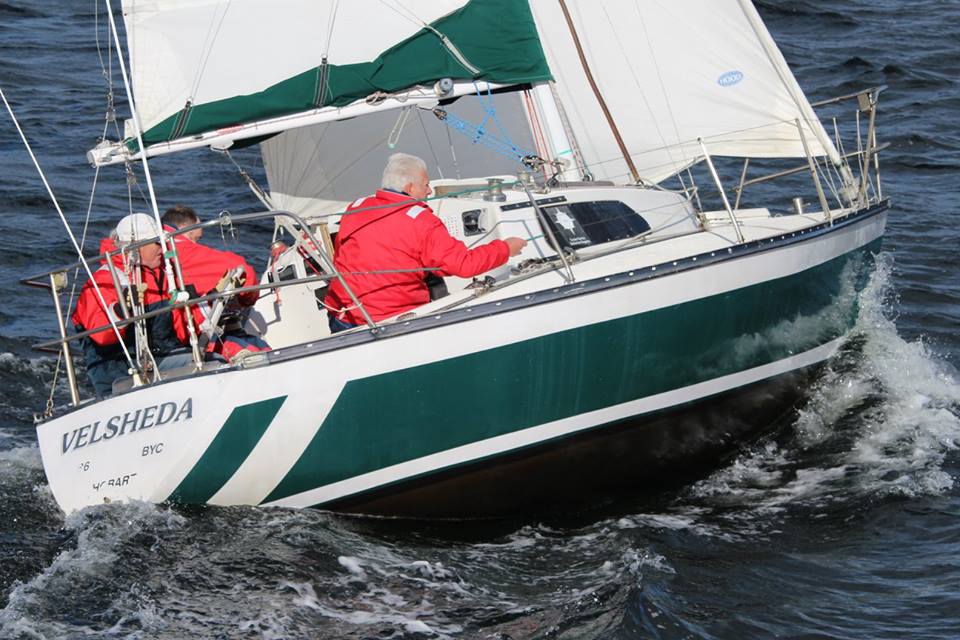 The finish of the final race for Division 1 of Bellerive Yacht Club/Tilford Auto Group Winter Series was a real nail-biter for Michael and Michelle Denney in their Z39 Wild West on Hobart’s River Derwent today.

Then came a wait as BYC race officers calculated the overall result for the Winter Series.

The result was very much an eastern shore versus western shore outcome between prominent members of different clubs;  Michael Denney is sailing manager of the Derwent Sailing Squadron,  Ian Stewart is vice commodore of Bellerive Yacht Club.

BYC’s Winter Series ended on a sparkling late-winter morning – with more wind than forecast and some subsequent dramas on the water.  The Alaska  45 Committee Boat recorded a gust of 28 knots during the middle of the race.  However,  most of the race was sailed in Northerly wind of 15-24 knots.

With today’s race 5 the decider of the series for Divisions 1 and 2,  the starts of both fleet were fiercely contested.

Several boats broached downwind in the gusty conditions with some damage to sails and running rigging. Wildfire retired with an injured crewman (a knock to the nose)  but recovered ashore.

Division  2 went down to the wire with prominent BYC member Chris Sheehan sailing Saga to an overall victory with a third in the final race.  Saga did not win a race during the Winter Series but never placed worse than equal fifth to finish with a net 12 points,  four points clear of Dave Willans’s Trouble.  Southern Swordfish (Doug Barry) took third place on a countback from Excite (Robin White).