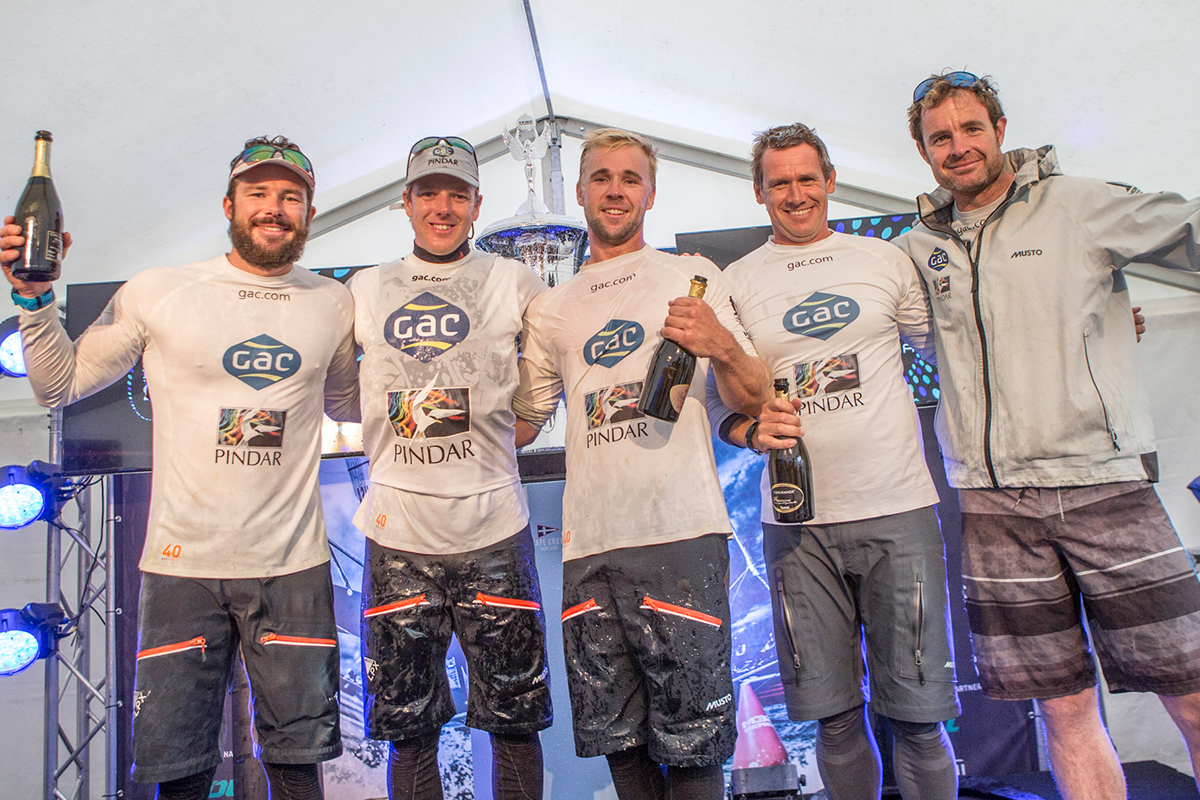 They say nothing is over till it’s over – and never has that proven more true than by what went down at the final day of the Scandinavian Series event in the city of Aarhus today. British Ian Williams claims the top spot at even points with Swedish Nicklas Dackhammar after an unbelievable final race.

It looked to be a slow final day with light southeasterly winds of 3-5 knots postponing the start of today’s racing in Aarhus, Denmark. But what the day lacked in winds, it delivered on in action, with the five teams sparing no means to secure their spot on the podium. Swedish Nicklas Dackhammar on Essiq Racing Team was one point ahead of British Ian Williams (GAC Pindar) heading into today’s final day, and the Swede looked to defend his ground right up until the final leg of the final race.

Dackhammar had started the day with strong sailing in the initial three practice races that the Racing Committee put through due to shifty conditions around the course in the city harbor. In the first race to count in the overall scoring, the Swedish skipper crossed the finish line first after steady sailing around the course in front of top rival, Williams. Hereby adding another point to his leading position. Similar to yesterday the reach-up&down-reach course seemed to agree with Dackhammar who has shown impressive strength so far at the event.

In the second and final race of the day, the young Swede got off to a beautiful start accelerating ahead of the rest on the initial reach, rounding the bottom mark first and heading up-wind where catastrophe struck. In a port-starboard situation with Danish boat, TREFOR Racing, Dackhammar landed himself a penalty that proved very expensive in the light conditions. While trying to get the boat moving after the required tacks, the two Danish boats, TREFOR and TRIFORK, whisked ahead of Dackhammar first. Not soon after also Williams and Måns Holmberg (TyphoonX Racing) where ahead, bringing Dackhammar from a first to a final position in the race. He eventually got the boat moving and managed to put himself back into the race by leaping ahead of Holmberg, almost catching up with Williams. With two points down to Williams, Dackhammar only needed to cross the finish line right after the Brit – with Holmberg behind them.

But should anyone have forgotten Williams’ six winning World Match Racing titles then they were about to be reminded.

On the final mark rounding, Williams went into duel with Dackhammar giving Holmberg time to catch up with the two. In perfect timing the Brit then put his boat into speed again, once Holmberg was close enough to be in front of Dackhammar, but behind Williams. The only way possible for GAC Pindar to top the podium by being at a point tie with Dackhammar – and have the better score in the final race.

“It was a matter of fine judgment and team effort. The shared understanding of what we were trying to achieve and how to do it, was crucial to our success,” says Williams, who drew on his experience from team racing, where slowing down the competitors’ boat to make way for your own team’s, is a key element.

But while Dackhammar might have lost this one, he isn’t finished. “Our ambition is still to stand on the top of the podium so we will keep fighting,” says the skipper, who will race at the next Scandinavian Series’ event in Helsinki on September 1st.

The third spot of the event went to Danish Nicolai Sehested, while the other local team, Trifork, ended up fourth but as the overall winner of the final day. Swedish Måns Holmberg ended the regatta in fifth.

The Battle of Aarhus was the third stop of the M32 Scandinavian Series with the next event coming up in Helsinki from September 1st till September 3rd.