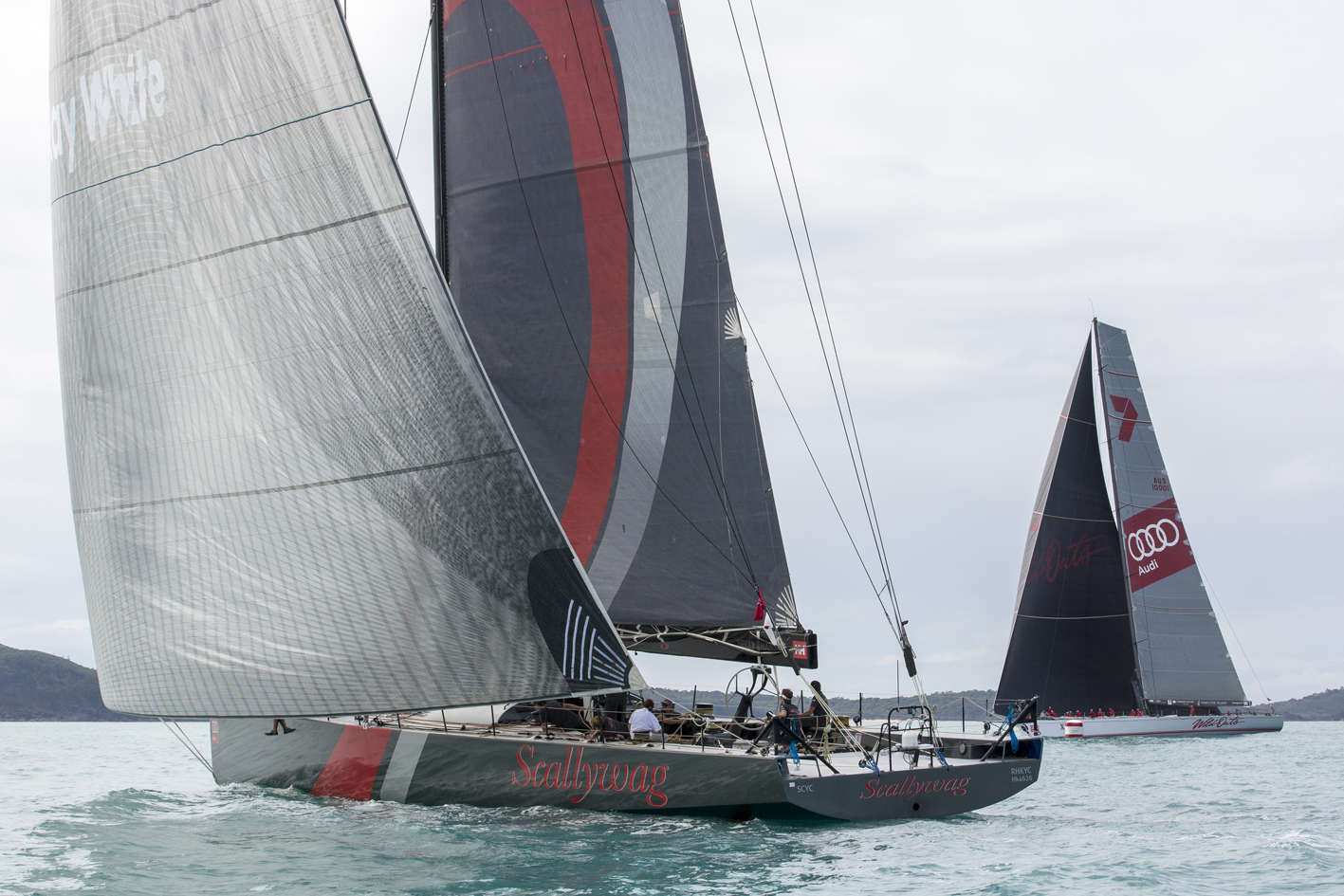 A light breeze and cloudy skies on the morning of day two of Audi Hamilton Island Race Week saw 12 of the 14 divisions scheduled for various island courses starting from Dent Passage.

The Trailables Division led the vanguard at the first start gun, but it soon became apparent that plugging a strong south going current in such light breeze was going to make for a very slow and congested start to the day.

The race committee swiftly relocated the start line to the northern tip of Dent Island from where the yachts would enjoy a faster run south with the tide beneath them. A whale and her calf rolling lazily on the tide entertained the yacht crews as they motored to the new start line, the pair seemingly unperturbed by the close-up attention they were getting.

Rating Divisions A and B in the Australian Yachting Championship were sent to the eastern course for two windward/leeward races, wind permitting.

The best of the wind was short-lived across all of the courses with breezes fading from 12kts south-easterly to 4-5kts by early afternoon, forcing the race committee to abandon the second windward/leeward race and to shorten all of the island courses.

In the AYC Rating Division A it was first blood – of sorts – to Seng Huang Lee’s supermaxi Scallywag, which led the Oatley family’s Wild Oats XI from the gun in race 2 of the series and maintained the lead over two laps of a windward/leeward course to cross the line first in a dying breeze. However, skipper David Witt and Scallywag were recorded as retired after finishing with one less crew than they started with.

“Kim Pascoe our on board reporter was filming to leeward when we gybed; the sheet picked her up and threw her over,” Witt explained. “It was the last mark of the last run and you have to finish with the amount of people you start with. We knew there was a rib right there to pick her up.”

“We’ve never really been able to test the boat against Wild Oats XI, so when we rang the owner after the race he was very happy. After all, in what other event apart from the Hobart do you get two 100-footers boat-on-boat?”

“For us it’s all about ‘Oats’. They are a long way ahead of us in terms of preparation and crew work, so the biggest thing we can get out of this week is to spend as much time as we can next to them, and hopefully beat them a couple more times.”

“Beau Geste is now two from two, we expected them to go pretty well,” said Matt Allen. “We feel like they are a little quicker uphill on adjusted time on most of the boats, downhill it’s more of an open game.”

Racing in other divisions was still in progress at the time of writing with a cut-off timeline of sunset, being shortly before 6pm.
The outlook for Tuesday’s racing is for light winds at first, becoming N-NE 6-12kts during the afternoon. A shower or two is also forecast.

All information relating to AHIRW is on the regatta website.