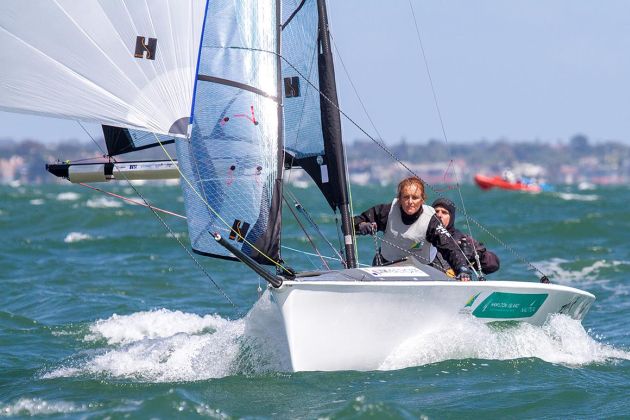 As the athletes walk into the opening ceremony at the Rio 2016 Paralympic Games on September 7, it will be a bittersweet moment for the sailors. In February 2015, the International Paralympic Committee made the decision to remove sailing from the competition in Tokyo 2020. It was a shock decision to the community and there has been huge support for the sailors and the reinstate sailing campaign.

Skud 18
Daniel Fitzgibbon and Liesl Tesch have arguably the most Paralympic experience combined of the Australian Sailing Team. Fitzgibbon has competed in the Skud 18 at two Paralympic Games and medalled in both – Silver in Beijing 2008 and Gold at London 2012.
Rio 2016 will be Tesch’s seventh Games, her second in sailing – she represented Australia in Wheelchair Basketball five times before moving to sailing. She also has a medal of every colour – Silver, Sydney 2000; Silver, Athens 2004; Bronze, Beijing 2008; Gold, London 2012.
The duo teamed up together in 2011 after Tesch competed in the Sydney Hobart Yacht Race. The pair  were an immediate success and won their first event within weeks. Since winning Gold in London, they have won the IFDS World Championships twice and at the 2016 worlds they finished third. When they return to the Paralympic competition to defend their title, they will undoubtedly be one of the favourites. But they have tough competition.

2.4 Norlin OD
Australian sailor Matt Bugg will compete in his second Paralympics in Rio, he finished seventh in London. Since the 2012 Games, the Tasmanian has consistently placed in the top five at World Cup events and the IFDS World Championships. This year he finished third at the Para Worlds.

SONAR
Australian skipper Colin Harrison made his Paralympic debut in Athens 2004 with Jeff Miligan and Jamie Dunross. In Beijing 2008 he won the bronze medal with Rodney Angwin and current bowman Russell Boaden. At the London 2012 Games, Harrison finished sixth with current team mate Jonathan Harris and Stephen Churm.
Of the three-person team, Harrison has the most experience heading into his fourth Paralympic Games, Boaden will compete in his third, Harris his second. At the recent worlds, the trio finished third.
The Paralympic Games run from September 7-18, 2016.