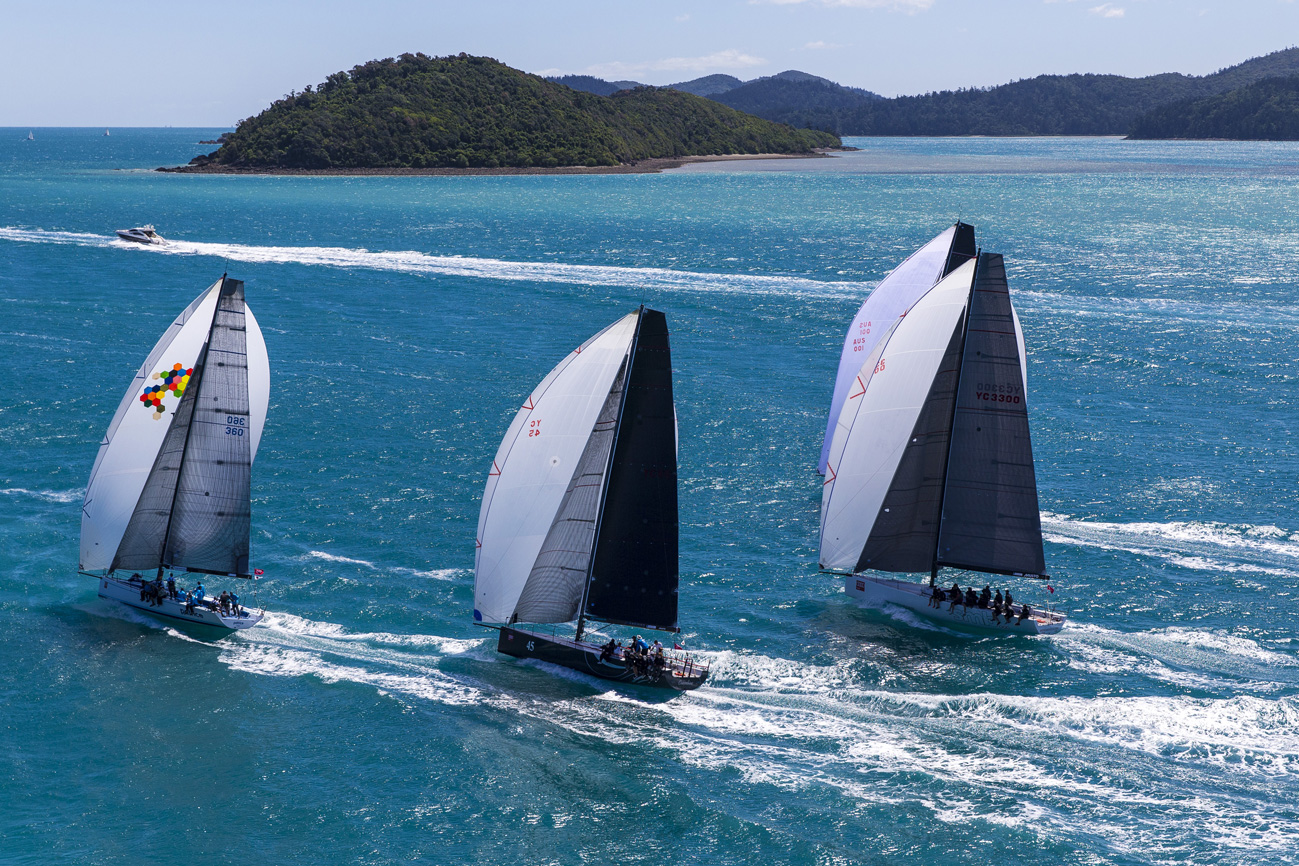 Rating division A racing around the Whitsundays. Photo Andrea Francolini.

The new format Australian Yachting Championship title concluded on the final windy day of Audi Hamilton Island Race Week, Saturday August 27, and two winners from the 2015 series returned to glory after five days of racing in the Whitsunday islands playground.

Rating Division A & B

“Three in a row, the trilogy…. we are very lucky. The team worked hard,” said Kwok. On their hidden strength he reckons, “the core of the crew have been racing 52s for three sessions; Hamilton Island, Airlie Beach and before that some were on the Vespa 52 program in America. And all of us remember sailing here so well, we are no stranger.”

On their plans for the 2017 title, Kwok says the team hasn’t talked yet. “The best sailing for us living in Hong Kong is Australia and New Zealand.”

Beau Geste wrapped up what was the IRC Australian Championship at Hamilton Island in 2015 with the same boat and in 2014 they won at Newcastle with Kwok’s previous Beau Geste.

Barlow had designs on the Australian title that were no secret, and to achieve the result he drew together a bunch of professional sailors who happened to be old mates, as a one-off. “We get on well as a bunch of blokes, which is a big part of my life,” Barlow said.

“Winning seems easy at the end, but it was a tricky and close week of racing,” Roberts admitted. He’s put together many prize-winning campaigns over the years, including three or four division wins at Audi Race Week, but it’s been ages since Roberts won an IRC title. “I won the first ever IRC national title in 2000, it was connected to the Sydney Olympics,” he recalled.

Canberra sailor Matt Owen’s extraordinary success at Audi Race Week over the years continues with yet another division win, this time in the Racer Cruiser category, giving him back-to-back national titles at Hamilton Island where he escapes each August from the ACT’s winter chill.

This year Owen skippered the Southport based Sydney 32 called Onyx on behalf of its owners, the Hutcheson family. “They are long-time family friends and we are very proud they let us punters from Canberra use their boat,” Owen said. “We showed them what their boat can do.”

At half the size, the only time Charles Curran’s 60-footer Sydney and Onyx really came together was on the series scoresheet, duelling for the top spot, though today Owen spotted his nemesis: “It was the first time we saw Sydney on the race course, it’s hard to race against the benchmark when they are in a different suburb.”

The newly added Racer Cruiser category is scored under a performance handicap system, which means a boat’s handicap rating may be adjusted throughout the series based on performance.

“We are thrilled to take out the championship,” Hull said today while packing the boat for shipping. “I think the standard of racing among the high-performance multis has been very impressive – it was a fiercely fought championship. The conditions played into our hands, they were good foiling days other than today, which would have been pretty severe.”

Summing up this year’s Australian Yachting Championship, president of the national body Australian Sailing and competitor Matt Allen said, “Hamilton Island has again delivered a wonderful week of racing, a mix of challenging courses and strong currents which always tests the crews.  Our thanks to Glenn Bourke and his team who ensured a great week for everyone.

“It has also been a fantastic celebration of sailing with the Australian Sailing Team joining us on their return from Rio. They have been overwhelmed by the warm welcome they received from the sailing community,” Allen added.

Dates for the 2017 Australian Yachting Championship are confirmed, Thursday 23 to Sunday 26 March, conducted by the Cruising Yacht Club of Australia.  The format will be three windward leeward races on both Thursday and Friday, then a passage race on both Saturday and Sunday.