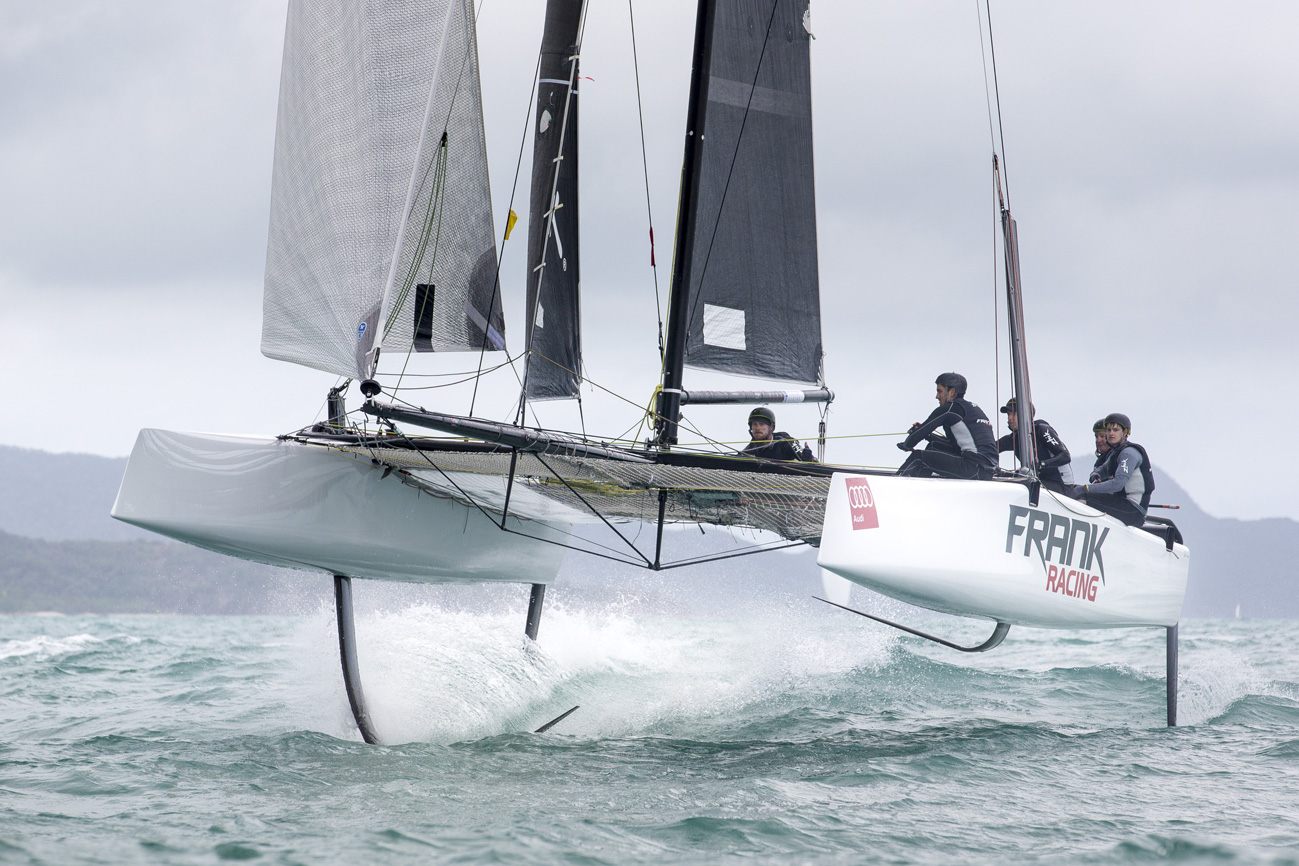 “I can’t tell you the buzz you get out of sailing the GC32. I’ve spent years and years on the likes of TP52s and other keel boats eking out a tenth of a knot here and there, and with these things you just jump 10 knots, it’s a quantum leap!”

So says Simon Hull, Kiwi skipper of the foiling GC32 catamaran Frank Racing which is presently leading the Racing Multihulls division of the Australian Yachting Championship at Audi Hamilton Island Race Week, and turning heads as it passes in a blur.

Hull knows a thing or two about fast boats as the skipper of the Orma 60 trimaran Team Vodafone, which recently set a new record time for the Auckland to Fiji run.

Not satisfied with one record in a year, Hull has the boat berthed in Noumea in the hope of beating the race record in the Groupama Race around New Caledonia in October.

For all of the thrill of fast ocean racing in multihulls, it’s the huge learning curve that the Frank Racing team is on – acquiring the fine points of foiling and most importantly staying up on the foils as long as possible – that has Hull absorbed at the moment.

“As a change from the last six years racing the Orma 60, it’s great fun to be back to seat-of-the-pants racing again. But we’re a bit out on a limb in NZ,” says Hull, referring to the limited numbers of GC32s in the southern hemisphere when compared with Europe’s large fleets.

“We don’t have others to race against, so we’re not that close to the class’s learning curve. When the Kiwi guys who sail these boats in Europe come home, we get them on board and learn from them.”

The GC32 is now the chosen class for the Extreme Sailing Series, which stages spectacular, short course ‘stadium sailing’ in the heart of some of the world’s great harbour cities – a very different setting to Queensland’s Whitsunday islands.

“These boats are really designed for flat water harbour racing, so the island courses at Race Week are a bit of a challenge in any seaway,” said Hull.

“But we’re learning the art of ‘skimming’ by not lowering the foils as deep. It’s not as fast as with the foils fully deployed, but the average speeds are higher as the boat tends not to crash as badly when it comes off the foils.”

The Frank Racing crew at Race Week comprises most of Hull’s Auckland-based sailing team, but when one of his regulars was unable to come at the last minute, the skipper managed to secure Aussie sailor James Wierzbowski, who races a GC32 on the Extreme Sailing circuit aboard Oman Air, the current series leader.

“I’ve been to Hamilton Island before but never for Race Week, so I jumped at the chance when Simon called me,” said Wierzbowski.

“My role description is bowman, but really my job is controlling flight by adjusting the foils and the rudder angles. We don’t sail to the numbers or compass bearings on these boats, it’s really all about what feels right,” he adds.

Travelling at ‘flight’ speeds in excess of 25 knots on foiling multihulls comes with its dangers, so safety is foremost in Hull’s mind.

“I am involved in the NZ Multihull Yacht Club and I’m their rep on Yachting NZ’s safety committee.  We’ve studied the America’s Cup team safety strategies to see what they do and we’ve adopted this as best practice through the Sport Multihull Regulations, which are now formally adopted by Yachting NZ. Australian Sailing is allowing us to trial these safety regs at Race Week.”

“You’re sailing these things on the edge, pushing them hard and so crashes hurt. It’s not a keel boat that can lay down and kick ‘til someone cuts away the halyard and it sits back up. It’s a multihull and there’s a good chance it will end up upside down, and if you get caught underneath there’s no way you’ll quickly get to the side; so you’ve really got to be prepared.

“We have a mandatory support vessel with lots of safety equipment on board and it must follow us around the full course. All the crew wear helmets and must have a knife on their PFD; we also have a re-breather on board which can provide four to five minutes of air underwater, and we have comms with our chase boat and the race committee.”

At the end of the 33rd edition of Audi Race Week which officially finishes tomorrow, Saturday August 27, 2016, Frank Racing will be packed up into a single 40-foot container and shipped back to New Zealand in preparation for summer racing.

“We may go to Europe next year,” said Hull. “We’re not expecting to push the pros from the America’s Cup campaigns but we’ll learn plenty and have a whole lot of fun.”

And what of the future of foiling? Hull is convinced it will fast become mainstream.

“Foiling is the future, and we’re starting to see some of the development programs using foiling cats,” says Hull, also recalling his days as a youngster sailing Paper Tigers, “after all, kids just want to go fast and anyway, you go yachting to go faster than you did yesterday!”