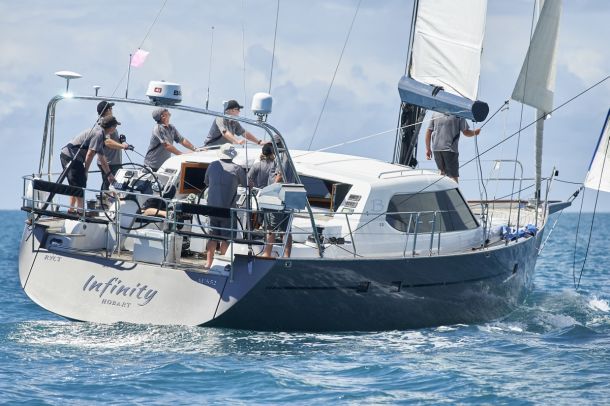 Winners of the six divisions contesting the ninth annual SeaLink Magnetic Island Race Week have been decided today at the completion of a challenging Cleveland Bay triangle course.

It was a tough final race where all crew couldn’t have sailed any better. Each division had its top place on the line as there was no drop allowed in the point score. Anything could have happened, and did some divisions.

The fleet headed off mid-morning, weight down and out, into what was threatening to be a dying breeze. By the time they rounded the clearing mark some half a mile from the start line, the six knot breeze was there to greet them and give them the push they needed to head north up the bay and into eight and eventually a 15 knot north-easterly.

By the Q Mark the race had become a bit of a soldier’s course for some of the divisions as the 60-boat fleet reached across towards Cape Cleveland then back towards the island.  This is what Guilty Pleasures VI Leon Thomas’ feared the most about this course. He knew if they were to have any chance to achieve an IRC podium place they would have to get off the start line cleanly and quickly. “There will be few opportunities to overtake,” Thomas said before the race started.

Bob Steel’s Quest had a poor start following the Farr 40s and Rob Curtis and Glen Tailby’s Kerazy to the first mark in the soft conditions. “Regrettably the main didn’t come and we then hit the mark. We shouldn’t have been anywhere the mark.  After that we had to chase everyone,” Steel said.

Sorensen had a great start getting to the first mark alongside Jason Antill’s Farr 40 Komodo.

A cuffed David Currie reported Ponyo was the first of the IRC boats to cross their finish line. “We were two to three minutes in front of Guilty Pleasures. Quest was just behind them.

“We had a good start. The wind started to come in, but it was extremely fluky. Sorro got on the wrong side of a wind shift. In the long reach across to Cape Cleveland we were just behind Komodo and just in front of Guilty. Then it was a blast reach from there to the drop mark at Hawkings Point. It was hairy stuff. We probably had only 15 knots, but we were carrying big, shy reaches. We finally managed to get through Komodo, held off Guilty Pleasures and covered them coming into the finish line,” a tired Currie said.  “We couldn’t have sailed any better today.”

The Philosopher’s Club won IRC, finishing on 10 points. “We are absolutely ecstatic by this result,” Sorensen said. His crew quipped; “not bad for a team of amateurs and women sailors”.

It was a three-way tie for second place with Ponyo taking it out on a count-back from Quest and then Guilty Pleasures.  “I am surprised [by our result]. We came with very old sails. Our newest sail is six years old. We threw our number light in the bin yesterday. And then we had to carry a heavier headsail today.

“Quest won the IRC Championship at Hamilton Island so for us to get on equal points with her here is quite amazing,” Currie said.

Ponyo also took out second place on PHS with Guilty Pleasures one point behind in third. “We didn’t think we would get that. Today we didn’t get distracted by the other 40s. We sailed our own race and that was the difference,” Guilty Pleasures co-owner Greg Dorries said.

The Tasmanian entry, Prescott’s Infinity, won the Cruising Spinnaker 1 by two points ahead of the significantly smaller Thompson 750 Mango Tango, skippered by Justin Daley, with Geoff and Jenn Fogar’s Ruby finishing in third.

“We really thought the little sports boat might have beaten us. It was a good course for us today.  We don’t go well in the light stuff which we had at the start. We got out of there reasonably well and then breeze kicked in. Those couple of reaches then helped us,” Prescott said.  He claimed they had the BBQ going in every race; but that’s another story.

Cruising Spinnaker 2 was won by Paul Neilson racing his father’s boat, De Ja Blue. They won by just one point from Wayne McNee’s Celebrity. In third on count-back from Celebrity was Greg Brown’s Gone Too Farr.

Neilson, while surveying about only half the boat’s cruising gear which was laid out alongside the berth which they bought with them from their home club of Hobson’s Bay in Melbourne, said; “We are very, very surprised. I think we were punching well above our weight for this series with the boats we were racing against.”

Non Spinnaker was won by John Parkes and Ingrid Rooke’s Spider 22 Untamed. “Beautiful. Love it,” declared Parkes on hearing the results. “Going in today’s race we had to beat No Legends home and they had to give us a minute of two. They were behind us all the way.”  Naree Carton’s No Legends finished in second and Andrew Burford’s Tucana finished in third.

“A perfect birthday present,” declared the birthday-boy Grunwald when he heard his multihull Two Up Together had taken out division honours. “We have an OMR and on that we would have had a very similar result to this.”

Next year is the tenth anniversary of the SeaLink Magnetic Island Race Week. The dates for the event will be September 1 to 6, 2016. 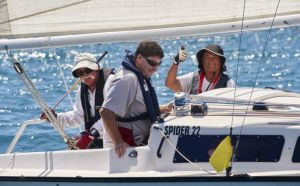 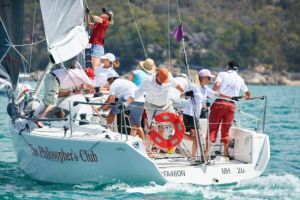