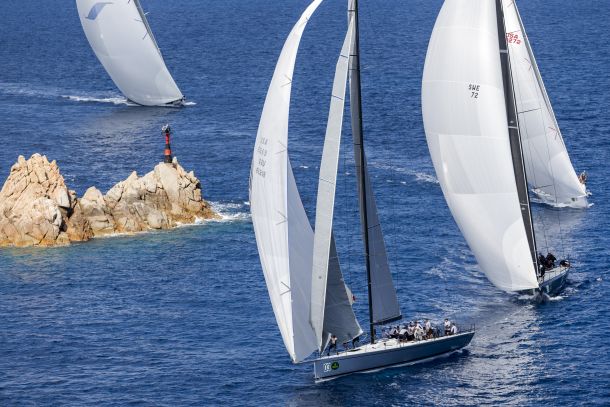 Porto Cervo, Italy: Blasting their way around the race track off Porto Cervo, Italy next week will be some of the world’s most impressive yachts, all competing in the Maxi Yacht Rolex Cup, organised by Yacht Club Costa Smeralda and the International Maxi Association (IMA). 2015 marks the 35th anniversary of this prestigious event and its sponsorship from Rolex and features its largest fleet since 2011, with 43 boats entered ranging from Gerard Logel’s Swan 601 @Robas up to the 66.7m Hetairos.

This year the line-up for the Porto Cervo-based event, that represents the pinnacle of the IMA calendar, is also set to be the most competitive. Nowhere is this more so than in the Rolex Maxi 72 World Championship.

New to the Maxi 72 fleet this year is MOMO, recent class winner in the Rolex Fastnet Race. However owner Dieter Schön is no stranger to the Maxi Yacht Rolex Cup having previously campaigned his Brenta 100, Chrisco in previous years. Since 2014 there have been some musical chairs with the reigning World Champion, Alegre, now competing as Caol Ila R. Rán 5, fresh from scoring straight wins at Copa del Rey MAPFRE in Palma and which finished third in 2014, is now being campaigned by George Sakellaris.

The level continues to rise in the Maxi 72, maintains Class President Hap Fauth, the Minneapolis-based owner of 2012 World Champion, Bella Mente. “We are all within three to four clicks of each other rating-wise, so there aren’t massive differences in boat speed. It is almost a one-design 72 footer.”

This year Bella Mente has been fitted with a new rig and her draft deepened to the maximum permissible 5.4 m. Her afterguard is packed with leading sailors such as navigator Ian Moore, American tactician Terry Hutchinson and former Volvo Ocean Race winning skipper Mike Sanderson. “Everybody realises what it takes to race one of these – it is basically professional crew and an amateur helmsman. There are enough strings to pull and they are complicated enough you really need a top guy in every position and they need to work together. Team work and crew chemistry are critical,” says Fauth, who praises Porto Cervo and its great hospitality.

As usual the main Maxi Yacht Rolex Cup fleet is diverse, and includes an impressive line-up of Wallys, with Sir Lindsay Owen Jones’ WallyCento Magic Carpet Cubed set to slogging it out at the front with Thomas Bscher’s slightly longer Open Season.

Many boats are competing at the Maxi Yacht Rolex Cup for the first time, such as German Maximillian Klink’s Botin 65 cruiser racer Caro and Jim Clark and Kristy Hinze Clark’s 100ft, Comanche, which during the Transatlantic Race in July became the world’s fastest offshore monohull covering 618.01 miles in 24 hours (average speed 25.75 knots).

While Comanche was conceived as an offshore racer, her owners also enjoy sailing her around the cans and on coastal courses. “We have got really good at getting the boat around a smaller track and Jim and Kristy and a bunch of their friends can come, participate and have fun with it,” explains skipper Ken Read. “And Porto Cervo is the prettiest place on earth to go sail boat racing. So we will enjoy being part of the passion for sailing they have in Italy.”

Many boats, such as Jean Charles Decaux’s Wally 77, J One, and Riccardo de Michele’s Vallicelli 80, H2O, return year in year out, the Maxi Yacht Rolex Cup being the highlight of their seasons. Also among them is the Wally 100, Y3K, of Claus Peter Offen, President of the International Maxi Association, who welcomes the fleet to Porto Cervo.

“It is with excitement that we look forward to the 2015 Maxi Yacht Rolex Cup. It will again be the greatest gathering of the Maxi fleet in the world, with more than 40 highly competitive yachts in various classes, including six Maxi 72s racing for their World Championship title, ten Wallys and 25 super maxis, maxi racer cruisers and Mini Maxis.

“I wish all competitors the best wind conditions, close racing and a lot of fun in the most spectacular surroundings.”

Racing runs from Monday 7th September (first warning signal at 11:30) until Saturday 12th September with a layday on Thursday 10th when the International Maxi Association AGM will take place.

IMA members also get to attend the IMA dinner at the Yacht Club Costa Smeralda on Wednesday 9th. Rolex Gala Dinner and Rolex Crew Party planned for 10 and 11 September.