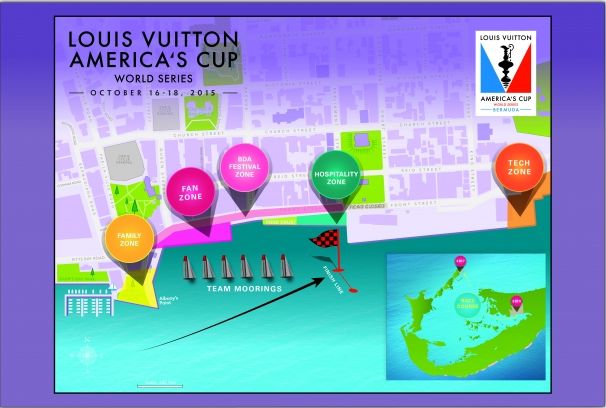 Along with the racing in the Great Sound, Hamilton’s Front Street will play host to the free “Our Bermuda” Festival and Event Village. The Festival will feature the very best of Bermuda including food and drink vendors, exhibitors, family friendly activities both on land and on-water from Friday evening through to Sunday evening. Saturday evening will also include a concert at the Fan Zone featuring an exciting line-up of international and local artists.

On Thursday, ahead of the opening of the Event Village, the America’s Cup Community Sailing initiative, the Endeavour Program, is planning to open its new facility in St. Georges, with a full afternoon of activities on the east end of the island.

On Friday, the teams will take part in official practice racing before the point scoring races on Saturday and Sunday afternoon.

All the weekend racing action will be accessible to the public on land, via big screens with live commentary at the Fan Zone.

Spectator boats will also be available, along with spectator craft zones alongside the race course. The full on-the-water viewing program will be released in the coming days.

“This is an exciting opportunity for the Bermuda public to get an early look at the America’s Cup and we’re sure the interest level will be high,” said Mike Winfield, CEO, America’s Cup Bermuda (ACBDA).

“This is the first of a planned series of releases that will explain the details of the Louis Vuitton America’s Cup World Series events to the Bermuda public. We will be releasing more information over the coming days and weeks, particularly with regards to the activities in the Event Village and the process for spectators to access the race course, either with their own boats or via a spectator boat.

“These AC45 catamarans are incredibly fast and we are working with all the necessary stakeholders to ensure great viewing but also public safety.”

“We are thrilled to be racing in home waters for the first time in the Louis Vuitton America’s Cup World Series,” said Jimmy Spithill, skipper and helmsman, ORACLE TEAM USA. “We encourage the entire Bermuda community to come out and support us and, at the same, enjoy a weekend of fun for the whole family. I know all of the teams are looking forward to some incredible racing on the Great Sound race course.”

The Event Village will be located on Front Street between Court Street and Par-la-Ville Road with the road closing from Friday October 16 at 4pm until Sunday October 18 at 7pm.

A public Town Hall and panel discussion is scheduled for Thursday, September 17 during which full plans for the Louis Vuitton America’s Cup World Series event in Bermuda will be covered in detail. The panel will include Sir Russell Coutts, CEO of the America’s Cup Event Authority, Dr. Grant Gibbons, Minister of Economic Development and key members of the America’s Cup Bermuda organizing committee.

“We are looking forward to having the Bermuda public come out to witness these magnificent boats fly over the clear blue waters of Bermuda,” said Sir Russell. “This is the first real opportunity for the eyes of the world to focus on the America’s Cup in Bermuda, and I know everyone who visits or sees the racing on television next month will understand why we selected Bermuda as the host venue of the America’s Cup.”

The America’s Cup is the oldest trophy in sport, pre-dating the modern day Olympics by 45 years, and the Louis Vuitton America’s Cup World Series is the first stage of competition in the 35th America’s Cup.