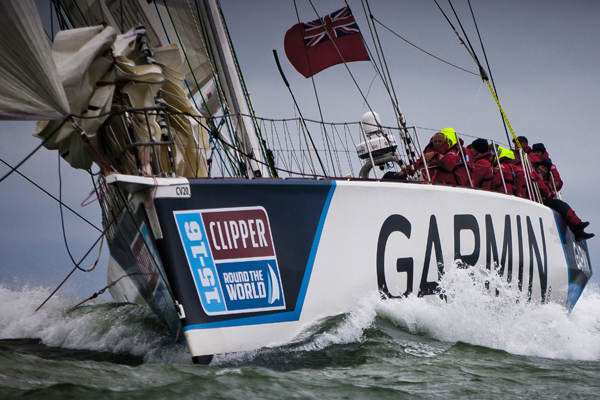 After an agonising day of drifting back further than they went forward at one stage, the latter half of the fleet; namely Unicef, Da Nang-Viet Nam, IchorCoal, Visit Seattle, PSP Logistics and ClipperTelemed+, have finally been enjoying building breeze as they cross the Bay of Biscay with boat speeds of up to 18 knots helping to make up lost miles on the leaders.

IchorCoal went from twelfth to eighth in the last 24 hours, its best position of the race so far. Skipper Darren Ladd explains: “This time yesterday the good ship IchorCoal was stuck in the Ushant Doldrums along with six of our fellow yachts. A frustrating situation that might well have been bliss under non-race conditions.

“Looking back at the log we managed seven nautical miles in the five hours from 0400 to 0900, and I'm fairly sure some of those were going backwards…The Automatic Identification System (AIS) tracks made an amusing picture as we all drifted slowly back in the direction of whence we came.

“What came next was the best game of catch up since Race Start. As the wind filled in to a steady north westerly, we picked up speed and quickly overhauled the nearest yacht to everyone's relief. We were no longer twelfth!

“We have since moved up to eighth. Better still, we have managed 115 nautical miles under the lightweight spinnaker and are currently going like a steam train averaging around 10 knots.”

At the front of the race, LMAX Exchange continues to lead with GREAT Britain once again less than a mile apart at times despite having gybed away from each other last night. North of the rumb line, Derry~Londonderry~Doire in third, Garmin fourth and Qingdao fifth (positions correct as of 0900 UTC), are chasing hard together.

Qingdao skipper Igor Gotlibovych explains what the change in conditions over the past 24 hours did for the crew’s experience: “With the wind eventually filling in, our speed quickly climbed into the teens, and the helms got a first experience of Trade Wind sailing. With the boat on the verge of broaching at times, the team made excellent progress, trimming constantly and, according to the position reports, catching up to the boats in front.

“Changing to heavyweight sheets, following by a midnight change from the lightweight to the medium weight spinnaker, really showed that the team is ready for the Portuguese Trades ahead! Getting the routing right in the next week will however be tricky and we are sure to see some big moves.”

Looking to leave the Bay of Biscay behind them today, Garmin skipper Ash Skett looks ahead: “A fresh northerly breeze is pushing us towards our next rounding, Cape Finisterre, at high speed.

“At this stage in the race, the fleet inevitably spreads out and the true isolated nature of ocean sailing becomes more apparent as the rest of the yachts, one by one, disappear from our computer screen. In reality however, I know that the other boats are not too far away.

“One yacht that is still within tracking range, however, is Derry~Londonderry~Doire, which we seem to have been battling with for a few days now and look to be our main rivals at this stage in the race. Over the next few days it will be interesting to see how it turns out.”

As the fleet gets toward Cape Finisterre the generally northerly wind is forecast to veer a little towards north-north east to north east and probably increase, which is quite normal for that area due to an increased pressure gradient between the North Atlantic High (NAH) and the Iberian heat low, which is nearly stationary right now.

After that life might become a bit more complex as the NAH is starting to split, and there will be many opportunities for quite localised winds as the fleet approaches the south end of Portugal.