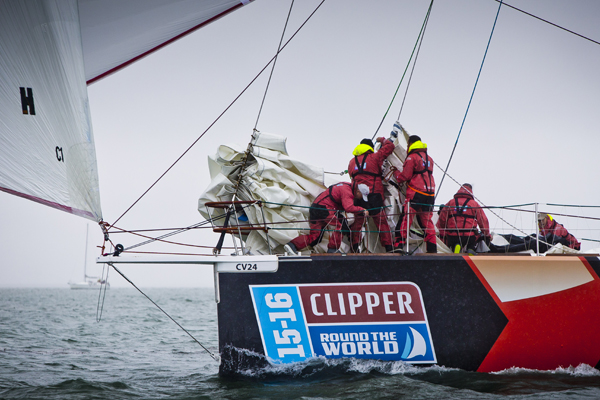 The race to get to the Bay of Biscay and out into the Atlantic was on last night as teams chased each other with good boat speed. However overnight light winds and strong northerly tides off the island of Ushant (the south west end of the English Channel and the north-westernmost point of France) have cruelly affected the back half of the pack, allowing an early gap to widen between them and the leaders.

The fleet had covered the 355nm from the Southend start line to Ushant in 37.5hrs, meaning a good average boat speed of 9.47 knots. However the back seven placed teams are now being pushed backwards after the wind in the area died and crew start to experience the significance of tidal change.

The lead is currently changing hands between LMAX Exchange and GREAT Britain (as of 0900 UTC). Third-placed Derry~Londonderry~Doire, Garmin in fourth, and fifth place Qingdao made it past Ushant before the conditions changed and are now selecting their best routes through the Bay of Biscay.

GREAT Britain’s Peter Thornton says: “It would appear that LMAX Exchange is going in the same direction as us. Either that or we're match racing. I have been considering taking a completely different navigation plan just to stop my uncontrollable need to watch Olivier’s every move and check the AIS (Automatic Identification System) quite so regularly.

“However, Qingdao, Derry~Londonderry~Doire, and Garmin are all still very close behind and with us now into the Bay of Biscay, we're splitting to find the best winds to make Finisterre.”

Looking to close in on the leaders, Garmin skipper Ashley Skett says: “We are quite fortunate to be heading past Ouessant (the French name for Ushant) at the perfect time- at the beginning of a very strong favourable tide. Unfortunately though, so are our closest competitors!”

Visit Seattle skipper Huw Fernie, currently sixth, explains the conditions that affected the rest of the fleet: “All was going well until we got to Ushant, where the wind has dropped off altogether and the tide is pushing us back as fast as we can sail forward.

“A very frustrating night of slow progress and watching the others (who made it past the corner before the tide turned) sail away, has really put us into the back pack. Still, the crew are all in good spirits and we have a long way to go to make up the distance.”

Da Nang-Viet Nam skipper Wendy Tuck, ninth, is doing her best to stay optimistic: “We did very well until the great Ile D'ouessant tidal drift. We have been seeing this lighthouse for some time now, with a fair bit of the fleet around us. We now have the spinnaker up and hope to make better time against the tide as it is due to change in a few hours.”

It wasn’t all bad news at the back though as Mission Performance went from twelfth to eighth, though are currently tenth, Skipper Greg Miller explains: “After being gutted about being last, the crew picked themselves up and got on with beating those in front of us! Then we overtookIchorCoal and Unicef, then ClipperTelemed+ before sailing ourselves into a wind hole. We currently have the medium weight kite up and are rigging the lightweight sheets to move in the right direction.

He adds: “There are about six of us inside this very little space trying to get out ahead of each other. We will see who can do it in the next schedule. At least we will know as we are within throwing distance of each other!”

When will the tides ease and the winds pick up for the back six teams? Who will get out first? Follow along via the Race Viewer below to keep updated.