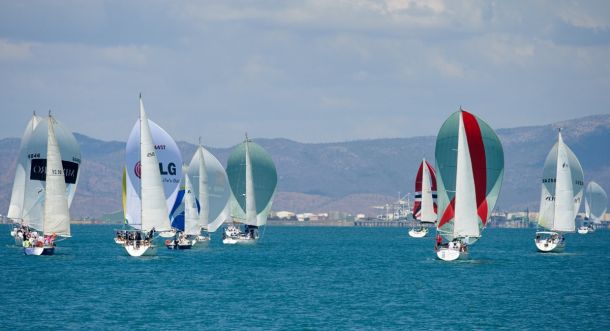 Peter Sorensen’s The Philosopher’s Club performance today has kept him in the lead for the IRC and PHS titles on the penultimate day of the SeaLink Magnetic Island Race Week.

The combined fleet contested two windward/leeward races. Sorensen’s team won both on IRC. “I don’t understand why we doing so well,“ quipped Sorensen as he considered his iron grip on the IRC title.

There were anxious moments on the start line in Race 1 when Bob Steel’s Quest came in on port tack while the rest of the fleet were on starboard. Steel claimed “operator error” by his crew member responsible for calling the countdown.

That mistake opened the door for David Currie’s Ponyo to take the lead in the combined fleet. By the finish Quest had moved back up to first place on the line, but on handicap The Philosopher’s Club came out on top, ahead of Ponyo with Quest finishing in third.

In the second race of the day Quest again had troubles crossing the line early. Steel said he had handed the helm to Michael Green. “Since I didn’t go any good in the one before, I said, ‘mate, you have a go’,” Steel said.

Ponyo also made the same mistake. Out to the left Guilty Pleasures, Jason Antill’s Komodo and Rob Curtin and Glen Tailby’s Kerazy got away cleanly.

It was another race where nothing seemed to go wrong for The Philosopher’s Club as they finished it with a first on handicap ahead of Guilty Pleasures and Quest.

Back at the dock Steel and this team were quick to congratulate their dock mates, The Philosopher’s Club, for another perfect performance. Steel joked that with these results Sorensen wouldn’t have to race tomorrow giving Quest a chance at winning another race.

On PHS, Mickey Ink’s Berocca Daze took out Race 1 while Guilty Pleasures won Race 2 for the combined fleet. Kerazy kept the pressure on the 40 footers, sailing tight races to stay in touch with them on the water which was the regatta goal for Curtis and Tailby.

These results still leave The Philosopher’s Club in first overall with Kerazy in second and Komodo in third.

On the other side of Cleveland Bay the cruising and multihull divisions contested a triangle course. The earlier concerns over a weak sea breeze for today’s racing was quickly wiped away once these divisions started. The north-easterly gently built throughout the afternoon bringing the boats home quickly in the gusty 15 knots.

Cruising Spinnaker Division 1 were led off the line and around the course by Wayne Millar’s Zoe, but it was the Royal Prince Alfred Yacht Club’s Geoff and Jenn Fogar and their Dufour 410 Ruby’s turn to take out handicap honours. In second was Murray Whitehead’s 45-foot Savanna and in third the Royal Brighton Yacht Club team on the 28-foot Run Run Run, skippered by Paul Jackson.

“A bit more breeze helped up along today. We only sail this boat once a year as we have other boats back in Melbourne. It takes us a while to get back into gear,” Jackson said. He also said their podium result would be a nice present for crew member, Nina, since it was her birthday today.

Cruising Spinnaker Division 2 was won by Stephen Bone’s Shiraz and in second place was Gail Harrower’s Iseulta, skippered today by Gary McCarthy. They had a great battle with Jack Maguire’s Zen and Wayne McNee’s Celebrity; at one stage as they ran down the island towards the western shore the boats were so close one of the crew claimed; “you could have stepped from one to the other”.

McNee handed the helm over to visiting New Zealander sailor Colin Harris as McNee claimed he was; “too hung over to drive”. Luckily for McNee, Harris did a good job of driving the team into fourth on handicap and back into first place overall. In second overall is Paul Neilson’s De Ja Blue.

Back in the fleet Buccaneer Too skipper Nick Doran was late to the boat and late to the start line. As the only fireman on Magnetic Island he had to respond to an emergency call. But with sailing his passion, he was able to quickly respond to the call at Radical Bay and then make a dash back to the Magnetic Island marina to leap on board his yacht and head out to the start line.

The Cruising Non Spinnaker race was won by Andrew Burford’s Tucana ahead of John Parkes’ Untamed.

On overall results Untamed is in the lead with Naree Carton’s No Legends in second. Carton has been sailing this series, her fifth as a skipper, with the help of her son, 2-year-old Finn who is doing his second Magnetic Island Race Week, and husband Guy. “We are doing well and yes, we are surprised because we don’t have any expectations. It’s just the three of us and sometimes it can be a bit tricky,” Carton said.

Koonya’s crew boss, Janet Lamble, will be disappointed by their handicap result of fourth. They started the race “frustrated” . “It’s always frustrating watching the boats go by with their spinnakers. We don’t have a kite or a genoa, just a self-tacking jib. We round the first mark in second last. We then got a bit more wind and a better angle, and the boat just picked up. We then came in second over the line.”

The Multihull division was won again won by Justin Grimwald’s Two Up Togehter with Mike Hodges’ Renaissance coming second. Hodges is not concerned about the handicap result, he is just happy to tote up another win against Two Up Together. “It’s nine to one now. We beat him in seven races in Airlie Beach and two here,” a dry Hodges quipped. He skited; “We had about 14 knots boat speed today, for a couple of minutes.”

Overall the top results are Two Up Together followed by Renaissance and Peter Wilcox’s Mojo.

The final day of racing is tomorrow with all divisions scheduled to contest a passage race.