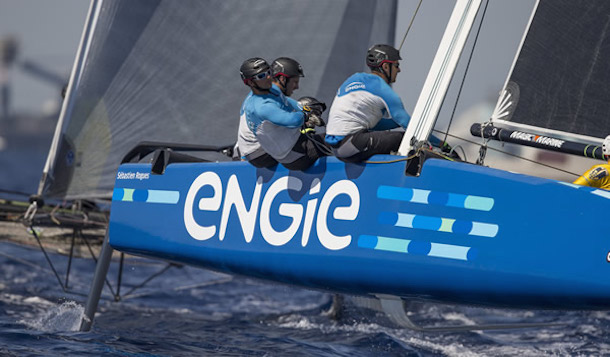 It is incredible the difference two knots of wind can make. While the Bullitt GC32 Racing Tour’s Trofeo di Roma had to sail two non-scoring Pro-Am races yesterday because of excessively light winds, conditions were just a fraction more today, enabling the full six race schedule to be completed.

For Sebastien Rogues’ Team ENGIE it was incredible the difference two days can make. After a lacklustre opening to Trofeo di Roma, thanks mostly to trying to get two new crew settled in on board, today the French team was joint best scorer alongside two time America's Cup winner, Alinghi. Today Team ENGIE only finished off the podium in one race and, as a result, has now elevated itself up to fourth place overall.

“For Team ENGIE it was a very good day,” said Rogues, looking happier than when he came ashore on Thursday. One of the two new crew is Matthieu Souben, who Rogues has sailed with for many years and who comes with almost two decades worth of dinghy catamaran racing experience, including a long stint in the one time Olympic Tornado.

“It is the first time for Matthieu, who is helming the boat,” said Rogues of his colleagues' GC32 sailing. “After the first day we had a good debrief, we looked at the problems with the crew and the manoeuvres and the helming and yesterday, while we didn’t race, we were able to train and do the things we identified were wrong on the first day. So today it was cool and we hope tomorrow will be the same as today.”

Rogues is keeping his fingers crossed that if they can make similar gains on their rivals as they did today, then Team ENGIE might achieve its first podium finish on the 2015 Bullitt GC32 Racing Tour.

Ernesto Bertarelli’s Alinghi team, on which Californian Morgan Larson is helming for this regatta, only seemed to get the bit between its teeth in today’s fourth race. However then they did so with style, winning the final three races of the day.

Their wins coincided with the wind building very slightly, enabling the GC32s to fly their weather hulls from time to time on the downwind legs. “Somehow we just found the rhythm of the starts and squeaked a little more speed out of it,” admitted Larson. “Once you were ahead it was fairly easy, because you had clear air. But we were a little sluggish earlier in the day – we couldn’t get the boat going downwind.”

Alinghi’s legendary main sheet trimmer, Pierre-Yves Jorand, is in Civitavecchia for this regatta, but is not sailing due to an injury. However he was set the task of attempting to establish what Team ENGIE was doing right. “You have got to hand it to Team ENGIE – they had figured something out,” admitted Larson, adding that this was partly crew positioning, partly the moding of the boat and a lot down to gennaker set-up. But it was also their sailing skill: “The guys on ENGIE did a really good job of building speed in the puffs, soaking really low, catching their speed and they were gaining boat lengths downwind.”

While Alinghi ended the day on a high, Sultanate of Oman began the day on one, winning the first two races, but coming home last in the penultimate race.

“The beginning of the day was really good – we made some really good moves, everyone on the boat really dialled into it nicely, we had a good feel for it and we came through the fleet a few times,” said the Omani team's British skipper, Leigh McMillan. “We weren’t absolutely nailing the starts, but there were some good opportunities. The last three were a bit more processional – it was still light, but it was a bit steadier and we didn’t get good starts and that cost us a fair few points.”

Making predictions about the weather seems pointless in Civitavecchia. The final day of the regatta is expected to be light, the question is how light… And with three boats within three points of first place and a fourth, Team ENGIE, strongly on the ascent, it seems likely that the final day of the Bullitt GC32 Racing Tour’s Trofeo di Roma will be as close as can be.