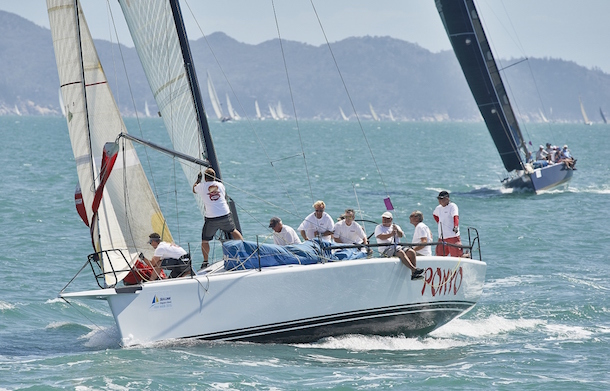 It’s hard not to call a perfect sailing day Champagne Sailing which is what the visitors and locals were saying as they returned to the dock after day one of the SeaLink Magnetic Island Race Week.

While Peter Wilcox’s GForce 15 multihull, Mojo, was the leader around the 24 mile Strand Bay course sailed in a pleasant 12 to 15 knots, David Currie’s 40-foot Ponyo was the stand-out boat in the IRC and PHS divisions taking out handicap honours in both.

Ponyo’s Tactician Bruce Taylor explained the team got an excellent race start and then quickly found themselves on the correct side of a big wind shift. Even without instruments, which are currently out of action, they were able to cleverly guess the current. They also kept an eye on what the local boats were doing.

“We then had fantastic racing against the other two Farr 40s – Komodo and Guilty Pleasures – and Quest. And we managed to just get ahead of them.

“We did have one little hiccup. At the clearing mark I got worried as one boat bored away. For a moment I wondered if we had the right course,” Taylor said.

Luckily Ponyo continued on while Peter Sorensen’s The Philosopher’s Club team, which at the time was leading the combined fleet, started to head in the opposite direction.

“There was a slight navigation error,” Sorensen said. They went 180 degrees, got ready to set up their kite and then realised the rest of the fleet were still heading out of the bay.  True to form Sorensen had the team sorted and back in action quickly only losing a few minutes on the fleet. Ultimately they finished a tidy second on IRC and third on PHS.

The three Farr 40s enjoyed the square run down the bay towards Townsville while hot favourite in the IRC fleet, Bob Steel’s new Quest, had a few issues. They had a strong start in the early soft conditions, but came unstuck on the spinnaker leg.

“We are really here for the toad races,” Steel joked. “Everyone else was excellent; we were a little bit off pace. We went the wrong way on the run. We came out into the middle of the channel and all the locals went down the inside and smashed us. We got what we deserved.”

Steel is now considering changing his navigator, Kaito Weiley, who flew in from Hong Kong just to compete with his old friend on the new Quest. “He’s our ex-navigator now,” Steel joked. In the background tactician Bob Fraser was busy in the cockpit rolling out the Magnetic Island chart.

“The owner was also on the helm today. We can only but improve,” Steel concluded.

In other dramas today, Bowen entry Mango Tango briefly lost crew member Mike Iversen over the side at the kite hoist. “We were just putting out the kite and I slipped and went over and hung on. It was just that simple,” Iversen said.  They kept the kite full and went onto finish fifth in Cruising Division 1.

Across the finish line, miles ahead of the whole fleet, was Peter Wilcox’s multihull GForce 15, Mojo.

“We are racing the handicapper at the moment. Today we sailed a really clean race.

“Our aim this week is to go as fast as possible; take no prisoners, within reason, but most importantly, sail a clean race,” Wilcox said.

This is a team that will be hard to beat across the line. They have been together throughout the Airlie Beach and Hamilton Island regattas. It’s a slick operation on the deck. “We don’t need to say much.”

In Cruising Spinnaker Division 1 it was the big boats that took out the top places; all of them visitors. In first place was Melbourne entry, John Kint’s 56-foot Bundaberg, ahead of Doug Ryan’s Shazam and Paul Ley’s Pilgrim.

The Multihull Division went to Justin Grunwald’s Two Up Together with class measurer Mike Hodges’ Renaissance  taking out second place and Mojo slipping into third.