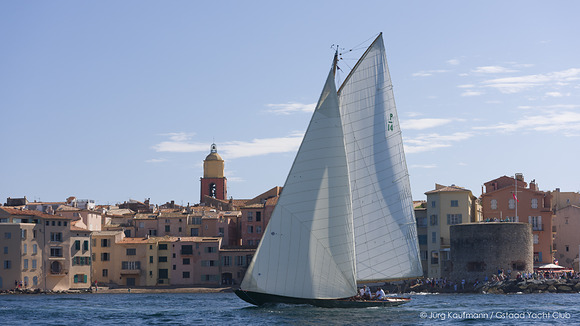 A bit more than one month to go to the fifth edition of the Gstaad Yacht Club Centenary Trophy, and preparations are well under way in Gstaad and St Tropez to welcome some of the most stunning centenarians still competing. The regatta, that has become the true and unique rendez-vous for the oldest ladies of the circuit is scheduled for Thursday, October 1st 2015, and is expected to be yet again the focal point of classic racing at the Voiles the Saint-Tropez, hosting event of the regatta.

For the fifth consecutive year the Centenary Trophy will gather one hundred years and more old yachts that will compete with an especially created and constantly refined handicap system in a pursuit race, a format that has proved extremely attractive for the sailors and the public alike, with the first boat to cross the line off the St Tropez breakwater to be declared the winner.

Bruno Troublé, skipper of 2014 winner gaff cutter Olympian said: “The Centenary Trophy is a great concept which shows the timeless charm of the classic boats and their designers' genius, who only worked with paper and pencil. We were very proud for last year's win that came back to victory after about…100 years! ''

The William Gardner's design, built by McClure shipyard in Boston, in 1913 was, as a matter of fact very successful in her first years, winning several races in North American waters and after a careful restoration celebrated her debut in the Mediterranean after a whole century with a triumph in the centenarians' event.

Yet, Olympian will not be the only comeback to the regatta. Among the boats that will beon the starting line there is also the gaff ketch Owl, launched in 1909 in the UK by shipyard White Brother from a design by Frederick Sheperd, fully restored in the 1990s and now owned by France's Vincent Baculard who describes his boat as: “Owl is an antique boat and its successive owners have always successfully maintained its old-style fitting and original look. Its fractioned rigging (cruising inventory is made on seven sails) makes for easy handling with a reduced crew, except when the gaff-topsail needs hoisting. Owl is a safe and very seaworthy boat, which has already crossed the Atlantic, and a fast one for its age, very balanced and comfortable too.“

Camper & Nicholson's designed gaff cutter Marigold (1892) and Herreshoff's NY30 gaffer Oriole are also confirmed in this year's line up. Hopefully the event will welcome some “rookies” as well, like William Fife III's designed gaff cutter Tern, from 1897, that with her LOA of less than 12 metres would be the smallest competing yacht, fore and aft cutter Eva also a Fife III's design from 1906, and 8 metre IR Esterel created by French architect Léon Sebille in 1912.

“I'm very pleased to welcome once again this great fleet of boats of one hundred years or more of age at the 2015 Centenary Trophy. I wish to thank owners, skippers, crews and guests for sharing with us and the public this fabulous display of yachting beauty and for taking part to the 5th edition of the Centenary Trophy in the waters of St.Tropez. Thanks to the partnership between the SNST (Société Nautique de St Tropez) and the Gstaad Yacht Club and the help of good, old friends I am sure we will spend again wonderful hours on the water and onshore at the evening's the prize-giving ceremony,“ declared Peter Erzberger, Commodore of the GYC.

Past winners are Italy's Five tonner Bonafide (launched 1899) that beat the strong competition in 2011, while in 2012 it was Richard Allan's fore and aft cutter Marigold (1892). Due to adverse weather conditions the 2013 race could not be sailed and the trophy was not awarded, in 2014 it was beautifully restored gaff cutter Olympian to grab the exclusive trophy created by Wakely and Wheeler of London in 1911. The Centenary Trophy is organized by The Gstaad Yacht Club in co-operation with the Société Nautique de Saint-Tropez.