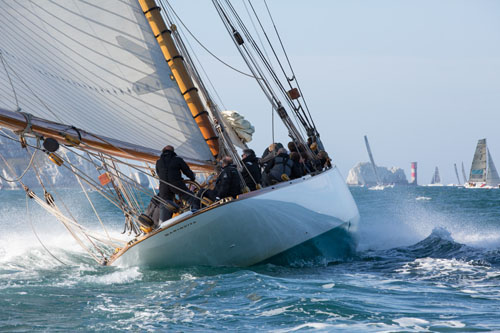 Mariquita, arguably one of the world’s most beautiful classic yachts, and the only 19 Metre left in existence, has just finished a third summer season with her current owners, counting podium finishes from three major regattas during 2015 alone. She gained first place in the Westward Cup and the Panerai British Classic Week in July and then took second place at the Royal Yacht Squadron’s historic Bicentenary International Regatta just a few weeks ago.

“Our syndicate of three has worked really successfully.”  says John Caulcutt, referring to himself and his fellow Mariquita owners Stephen Hemsley and Jamie Matheson.  “Helped by our great captain, George Newman, and our professional and race crew we have trained up a really cohesive team over the last three years.”

Mariquita, a gaff cutter, may look like a treasured museum piece but she is every bit a grand prix racing yacht.  Like other classic yacht ‘trustees’ her owners have spent the past few years maintaining her to the highest standard and trying to make her go faster.  She is now firmly established on the European and UK classic yacht racing circuit.

During her first season in 2013 Mariquita was regularly in the top three in the fiercely competitive Mediterranean classic yacht circuit.  ”We wanted to win,” said Caulcutt, “so we did a lot of work on the bottom of the boat, and flattened the topsail to produce more drive.   We achieved that extra half knot of boat speed that we had hoped for and went on to win the 2014 Big Boat Class of the Panerai Mediterranean circuit.  That was a huge success for our team and gave us the impetus to bring the yacht to the Solent this year, to see if we could repeat our performance.  We were very pleased that we did.”

The 2015 summer has seen many highlights for the three year Mariquita campaign.  During the Royal Yacht Squadron’s 200th birthday celebrations in Cowes the owners and regular crew hosted the Duke of Wessex for a race in June.  Olympic Gold Medallist Shirley Robertson also joined the yacht on one occasion to take the helm.

“We’ve achieved more than we could ever expect with Mariquita,” says Caulcutt “and there is still much potential to be released.  Our great hope now is to hand her over to her next guardians, who can care for her and set her on the path that will take her through her next 100 years.”

The current owners’ campaign was not the beginning for the re-born Mariquita.  Following her restoration she has been racing seriously since 2004.  Mariquita is now one of the largest classic yachts still sailing under gaff rig and her restoration and on-going care means she is kept in prime condition to be raced competitively for many years to come. 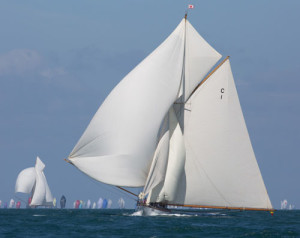 The name Mariquita means ladybird in Spanish, but beware, it can also mean ‘ladyboy’ in South American Spanish!

Mariquita, a 19 Metre design, was designed and built for industrialist Arthur Stothert by William Fife III and launched in 1911 at Fairlie on the Clyde in Scotland.  One of four 19 Metres she was watched closely in the period just before the First World War by everyone that followed sailing.

Mariquita is 125ft long (38.1m).  As a gaff rigged cutter Mariquita was a pre-cursor to the J-Class which followed in the 1930s.  The 19 Metres raced competitively until war intervened and Mariquita was sold to Norway in 1915.

By the 1950s all the other 19 Metres had disappeared but in 1938 Mariquita was decommissioned in West Mersea and moved to a mud berth at Pinmill in Suffolk on the River Orwell where she was used as a house boat for over thirty years.  Her glory days seemed far behind her.

In 1991 she was moved to Hamble where she was restored during a massive three year project by Fairlie Restorations, in fact the biggest project that the renowned company had ever overtaken.  Her original structure was still intact, but a complete rebuild was needed to bring her up to her current immaculate condition and to retain her original characteristics.

In 2004 she set sail once again under new guardianship and is now one of the stars of the classic circuit.  Over the last decade she has sailed on the Clyde, Cowes, Falmouth, and countless Mediterranean regattas including Monaco Classic Week, Regates Royales Cannes and Les Voiles de Saint-Tropez.

Mariquita’s accommodation allows for five guests and six crew while she needs 18 – 20 crew to race her so she is well suited to day racing.  She is looked after to an extremely high standard by her permanent crew.

She is of a composite construction, with steel frames planked over in mahogany and secured with bronze fastenings.  Addition of modern coatings, bedding compounds and insulation methods, a new engine and modern systems have been installed but her original personality remains intact. 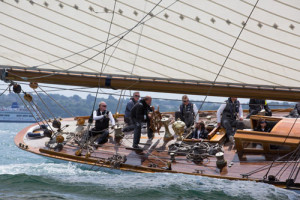