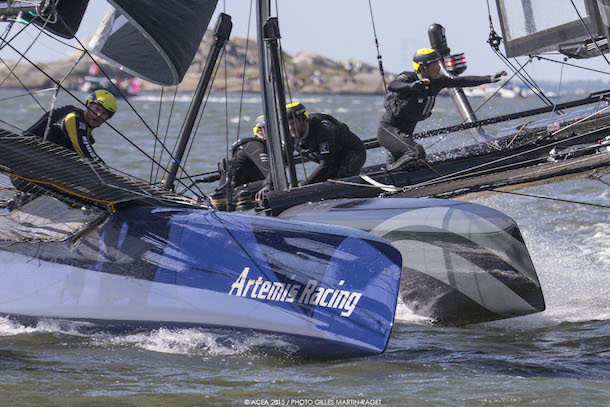 In fact both races saw the same teams in the same top three positions, meaning there isn’t much separation on the leaderboard.

“This was almost like a warm-up,” said ORACLE TEAM USA skipper Jimmy Spithill. “It's all about tomorrow when the points are doubled – Super Sunday. But that being said, I'd rather be in our position. We're sailing well, we're confident, and we'll be ready to go.”

His closest pursuer said quick starts allowed the winner to separate from the herd in both races and that was the difference.

“ORACLE really sailed well, had great starts and it fell into place for them,” said Land Rover BAR skipper Ben Ainslie. “We kind of had to fight a little bit but I was really pleased with how the guys battled today.”

Emirates Team New Zealand skipper Glenn Ashby called it a good day's work, but he’ll be disappointed with the second race when Ben Ainslie slid past just meters from the finish line to steal second place.

“It was a tough one,” Ashby admitted. “We made a call not to use the Code Zero sail (a big downwind sail used in lighter winds). It was only the last couple minutes of the race where it would have paid off. But they had it up just when we sailed into the lighter pressure and they just pipped us at the end. But the race was fantastic and you could have thrown a blanket over both boats and had trouble picking who was going to get there.”

It was a difficult day for the hometown Artemis Racing who had a mid-fleet finish in the first race before going aground after the finish and damaging their foils. The team was able to sail the second race, but at reduced efficiency which impacted on their last place finish.

“This morning we said we just needed to have a solid day to be in the mix for the double points on Sunday. We didn’t really have much chance in the second race today, but everyone is still quite upbeat,” said skipper Nathan Outteridge.

“We made mistakes but it’s all about how you recover. We’ll get the boat fixed up and be ready for tomorrow.

“To see so many spectators around the race course supporting us is pretty inspiring. We‘ll come back tomorrow and try to put on a show for everyone.”

Racing resumes on Sunday at 1300 CET. Points are doubled for Sunday's two raes.

Results after Day One of racing: