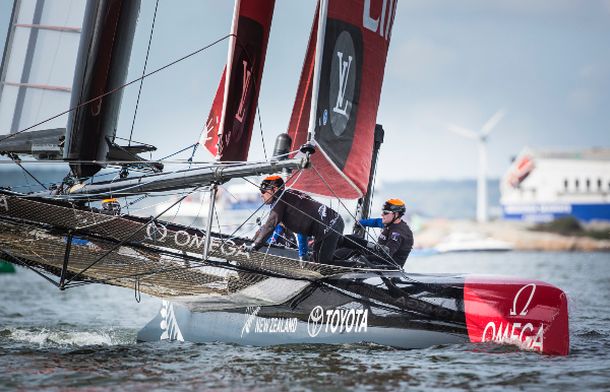 Emirates Team New Zealand put together a Super Sunday in Sweden, to vault to the top of the leaderboard and claim the Louis Vuitton America’s Cup World Series Gothenburg.

It was a difficult day on the tight race course, with light and shifty conditions. But the Kiwis, led by skipper Glenn Ashby and prodigy helmsman Peter Burling showed no fear, posting a 2-1 scoreline in the two double-point races.

In the first race of the day the local favorites Artemis Racing got off to a strong start and by the bottom mark had picked up a puff which eluded the fleet and were away to take a significant win to put them right back in the hunt for the overall win after an indifferent first day.
But it was the order of the following boats in race one which really set the foundation for a dramatic final race.

A pre-start penalty, which, resulted in Emirates Team New Zealand being last off the start line they managed to graft their way back through the fleet to cross the finish line in second, ahead of Land Rover BAR, Oracle Team USA. The mathematical equation of this meant all three teams, Emirates Team New Zealand, Land Rover BAR & Oracle Team USA were all tied on points, and Artemis Racing just two points adrift setting up what was effectively a winner takes all final race between the four teams.

Oracle Team USA had a strong start, and a good lead by the bottom mark 2. Ashby, Burling and friends rounded in 3rd place 100 metres behind the leaders. The key to the race, and effectively winning the regatta came on leg 3, when Emirates Team New Zealand split from the leaders at the bottom gate.

“We planned that from a long way out, we had a long chat amongst the guys and took the right hand gate even though it looked pretty bad for a long time, but we knew we were going to have a couple less tacks and have better pressure for that whole upwind but also get that right hand side at the top,” said Helmsman Peter Burling

Converging at the top mark, Emirates Team New Zealand rolled the American’s to round the top mark in front closely in front of Softbank Team Japan. From this point on Glenn Ashby and crew extended their lead, never comfortable, but in control.

“Ray and Pete managed to get the boat around the track really nicely as did Blair and Guy, so we are starting to gel really nicely,” said skipper Glenn Ashby. “There were plenty of snakes and ladders out there, plenty of opportunity and also room for going backwards quickly as well. But we were really happy with the way we sailed but a fantastic result for us.”

Helmsman Peter Burling continued, “We were really proud being able to perform under pressure in that last race. It is precisely what we set out to do, so all in all we are really elated with today and with the regatta as a whole”

Emirates Team New Zealand are the only team to have been in the top three in every race of the 2015 World Series this year, and as a result have a seven point lead overall in the series, ahead of Land Rover BAR & Oracle Team USA.

Saturday’s leader, ORACLE TEAM USA, came in to the day on the back of a perfect scoreline in the first two races. But on Sunday it was a different story. Two fourth place finishes dropped the defending champion of the America’s Cup to second place.

“We’re disappointed,” said skipper Jimmy Spithill. “We were having a very difficult time speed-wise and with our technique in the lighter winds. We felt good when the breeze was up and we were on the foils. So we have to get back to work.”

Land Rover BAR won the first Louis Vuitton America’s Cup World Series on home waters in Portsmouth. Two second place finishes on Saturday had the team poised for another top finish. But a poor start in the last race put the team in third place for the Swedish stop.

“It’s frustrating,” admitted skipper Ben Ainslie. “But that’s the nature of the sport. We’re pleased to be on the podium. We got past Artemis Racing and nearly caught ORACLE TEAM USA at the end, so that was important. In these conditions you need to get a good start and we didn’t do that. It’s hard to work your way back after that. I thought the Kiwis sailed a brilliant second race and deserved to get the win.”

SoftBank Team Japan was in fourth place, with a strong final race giving a boost to the team’s confidence heading into the next event in Bermuda.

“The goal today was to get better starts and get around the first mark in good shape and we did that,” said skipper Dean Barker. “It didn’t translate into the results we wanted in the first race, but in the second race today, we nailed it. We also had a couple of good results in the practice races as well, so hopefully we carry that through to Bermuda.”

Another team looking for positive signs was Groupama Team France, who raced without regular tactician Arnaud Psarofaghis, on a day that called for good tactics.

“It was good to finish third in the last race,” said skipper Franck Cammas. “It’s taken a long time to find a good mode for sailing downwind and that’s held us back. Today was tactically tricky. Even if you start well, the game comes after the start. But we managed the tactics with Thierry Fouchier and myself and we had a bit more time to think because the wind was light.”

The day started well for the hometown heroes on Artemis Racing, who have struggled to put together consistently good results. That pattern would continue. An inspiring win in the first race was followed by a last place finish in the second.

“We got a ripper of a start in the first one and when you get ahead of the pack in these conditions it can roll into a massive lead,” said skipper Nathan Outteridge.   “We’ve been working really hard as a team to fix our issues. Yesterday we sailed well but didn’t get the results which was very discouraging, but I kept reminding the guys it will come, we’re so close.

“So to put it all together in that first race was great for our fans, our team and for us on the boat as well.   Of course it would have been nice to follow that up with another solid race, but I guess we’ll have to do that in Bermuda.”

The Race to Bermuda starts in earnest now, as the Louis Vuitton America’s Cup World Series shifts to the home of the 2017 America’s Cup from October 16-18. 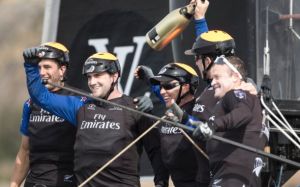