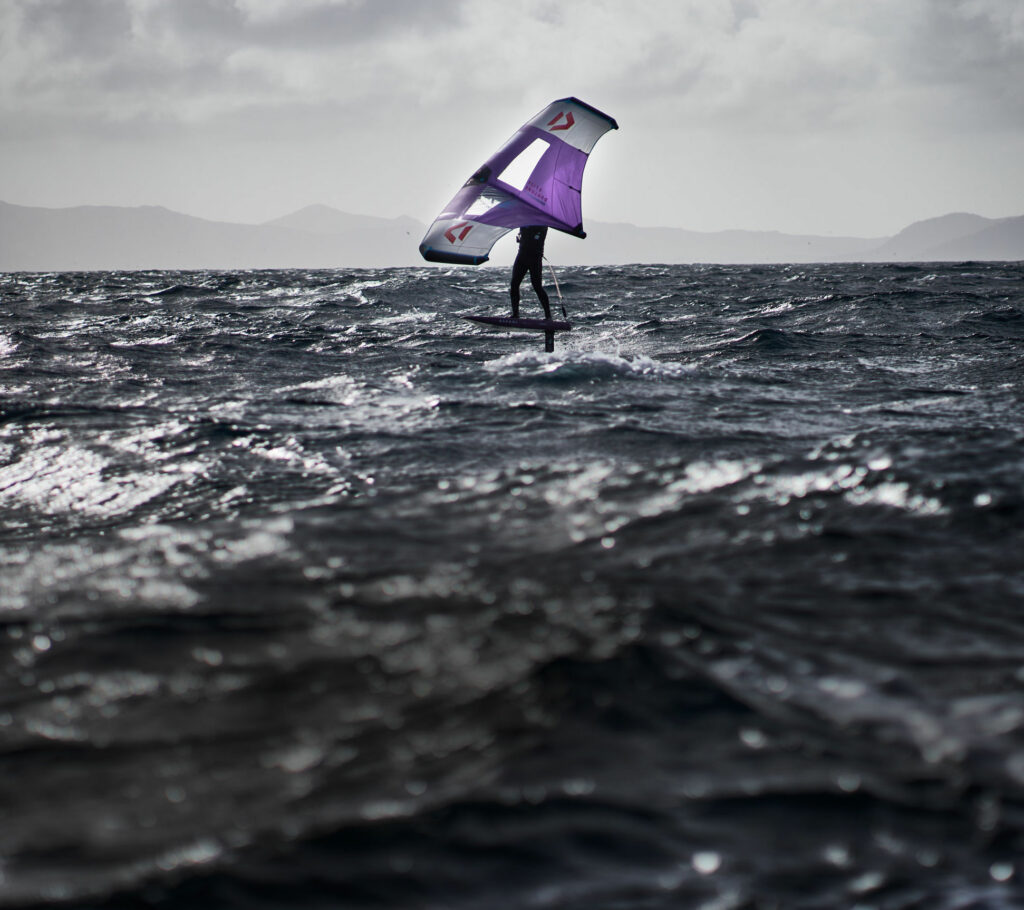 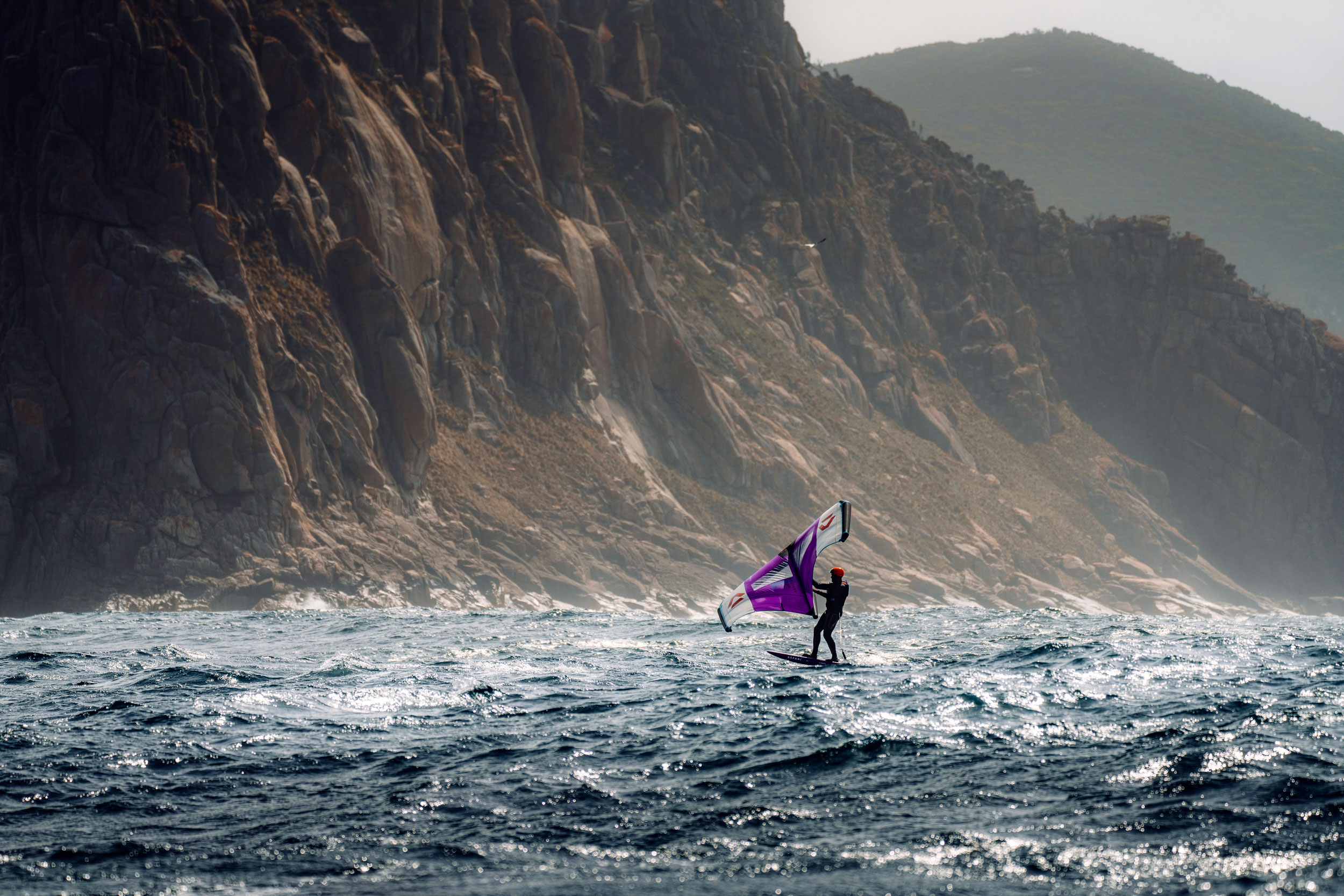 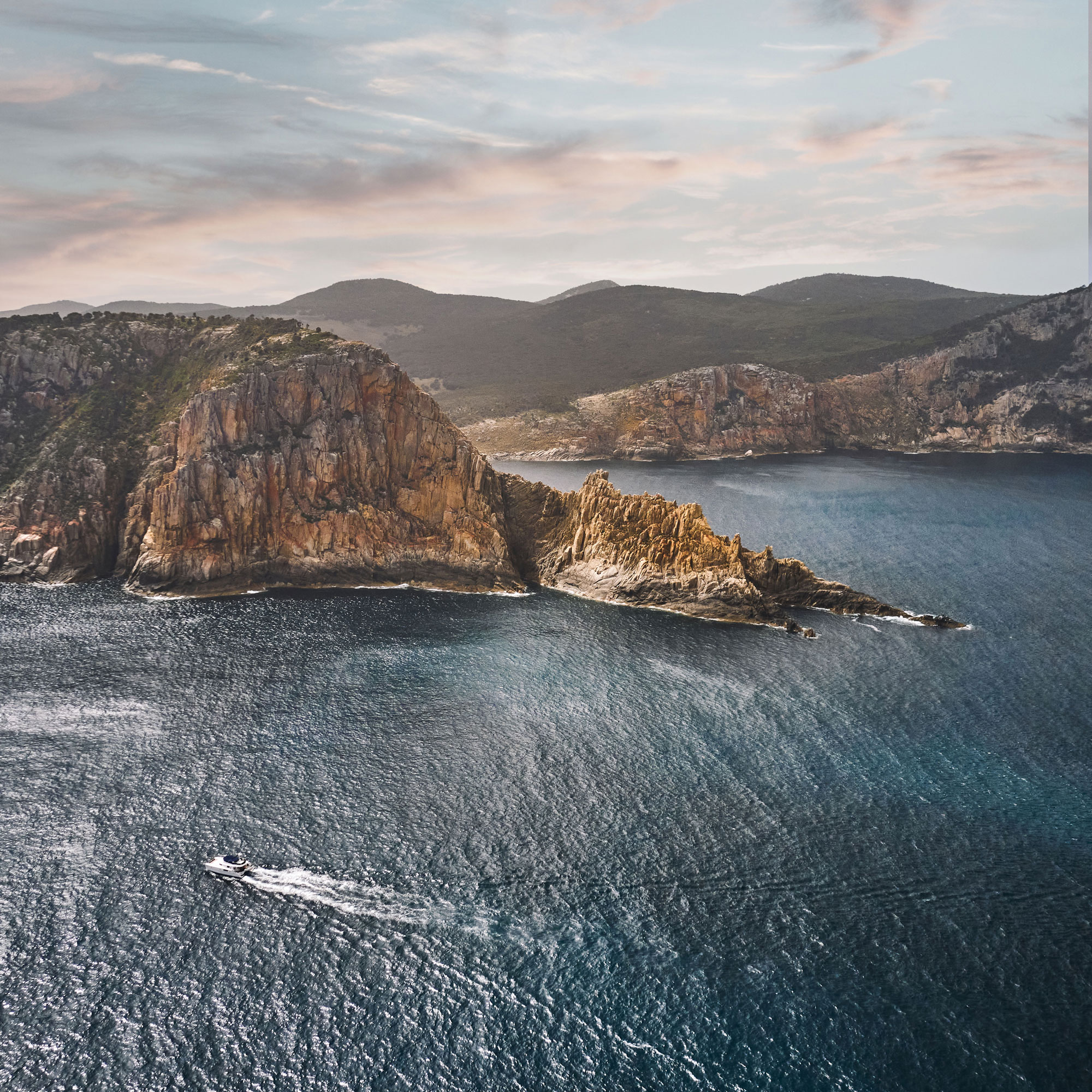 Andrew Englisch sits on his wing foil board off the north-eastern tip of Tasmania at Cape Portland, struggling to get onto the foil in light winds and huge rolling swell.

Englisch, 54, is only into the first day of an ambitious attempt to create a world first by crossing the Bass Strait on his wing foil.

He is scared. Not of being exposed to the elements in the Bass Strait – he has trained for six months and has faith in his skills. But as he sits on his board for five hours going nowhere, he becomes colder and more depleted of energy. Englisch fears the challenging conditions will cut short his journey; that all the time, effort and money spent will be for nothing.

“I was cramping, everything was falling apart,” Englisch says. “That was the first day and I thought, ‘We can’t even get going. This is ridiculous’, I was really despondent.”

On day two, the anxiety subsides as a 20-knot southeaster fills in. Englisch is quick to get foiling, and finally his dream of crossing Bass Strait, from Cape Portland, Tasmania to Refuge Cove, Victoria looks like it could become a reality.

Rewind two years to 2020, and Englisch, had never heard of wing foiling. He, along with his wife and two children, aged 10 and 13, were stuck at home in the Melbourne suburb of Elwood, for the 15-week long Covid-19 lockdown. Englisch, a filmmaker and owner of the video and production company Safari, was unable to work during lockdowns. He was inside and had little to do. Englisch, had “battled with mental health issues” all his life, and endured depression during lockdown.

But in March 2021, Englisch discovered foiling. Like many sailing enthusiasts, he was glued to the screen watching the America’s Cup (AC) in Auckland. The 36th edition of the world’s oldest sporting event (still operating) was raced on foiling AC75s. They were specifically built for the AC, and are 75ft (23m) foiling monohulls that can reach speeds of up to 50 knots (93 km/hr).

Englisch became “obsessed” and was itching to be a part of the foiling revolution. Englisch wanted to foil like the AC sailors. After doing some research, he found that many AC champions, including Jimmy Spithill and Peter Burling, were also avid wing foilers.

Wing foiling is similar to windsurfing. But rather than fins, the board has hydrofoils that propel it into the air. And the sail, which resembles a wing, is not attached to the board, but held entirely by the rider.

Englisch bought a five foot (1.5m) board. He started to wing foil on Port Phillip Bay, Melbourne. Prior to wing foiling, Englisch was a “mad windsurfer” in the 1980s and ’90s. After a 30-year hiatus, he recently got back into sailing with his kids out of Flinders Yacht Club. But he hadn’t experienced anything like wing foiling and “absolutely fell in love with it”. The depression seemed like a distant memory.

Englisch wing foiled most days. The seed for the Bass Strait crossing was planted after he wing foiled for three hours to cover 50km (26nm).

“I thought, ‘I wonder how far Bass Strait is?’ and I started to get this thing in my head that I could do it. I looked at the distances, and the longer stretch was 90 kilometres from the islands,” Englisch said.

“Then I absolutely became obsessed. I was looking at the charts and researching. Once I thought it was feasible theoretically, I spent every day planning for it.”

His crossing attempt was aptly named ‘Gone With The Wing’.

Englisch said that nobody had wing foiled anywhere in Bass Strait, so if he was to succeed, his would be a world-first crossing.

He organised a film crew from Safari to accompany him on a hired support vessel driven by a marine scientist. It was going to be a new challenge for the marine scientist, who usually took the vessel out in calm conditions to survey the region, not in 15-plus knots, three-metre swell that Englisch would face.

Englisch trained most days, predominantly on Port Phillip and Western Port Bays, in a range of conditions. At the peak of his training, he would complete 105km (56nm), non-stop.

“I went out in the worst conditions. If it was 35 knots, I’d go out. I’d go out overpowered, unpowered, I’d go out in the surf just to be comfortable in the water. I think I thrive in these miserable environments, so I definitely built up my resilience.”

He also worked on his strength with gym workouts. His main priority, however, was to spend as much time on the water as possible “to make sure I could go out six hours without water, without food without a harness, which I could”.

As he had to hire the support vessel six months in advance, Englisch had no choice about the day of departure. Unfortunately, the little distance travelled on day one (15km/8nm) cast doubt in his mind as to whether the crossing was possible. He needed about 15 knots of wind to get up on the foil, but it was far from that on day one.

“I was shivering and I cramped. I was not in a good way, but that was just because I was floating in the water. Once you’re up, you’re fine.”

Englisch was certainly “up” in the following days, ripping up the Flinders Island coast, reaching speeds of 20-30 kilometres per hour (10-16 knots) at times.

“We basically blazed up the whole coast of Flinders Island non-stop. I’m seeing seals, dolphins. I was just on fire, so I thought, ‘Yeah it’s absolutely possible’. That was redemption day for me.”

And the highlights kept on coming, even when Englisch faced “proper Bass Strait” conditions.

“[I was] in the zone and felt incredible [in Bass Strait]. It was quite foggy and there was sea mist but after about three hours I started to see land and it cleared through the fog. And it was amazing to know that I had crossed that. That was when I knew we could potentially do it, and the feeling was incredible.”

The only times Englisch ever “freaked out” was in squalls and a 10-foot swell, unable to see the support boat. But apart from those hair-raising moments, he had the time of his life.

To sustain himself throughout the intense three-to-four-hour wing foiling days, Englisch carried a water bladder filled with electrolyte fluid  on his back , as well as gels for energy and hydration. Back on the support boat, Englisch would take more electrolytes, magnesium tablets (to stop the cramping), and “gut luggage” prepared by the skipper – plenty of carbohydrate heavy but healthy meals like pasta and stew.

After a challenging first day, Englisch found his rhythm. He occasionally fell into relatively warm, 22 degrees Celsius water. According to Englisch, in winter the water temperature drops to 11 degrees Celsius.

On March 3, after wing foiling 220km for four days, Englisch ended his journey at the lighthouse at Wilsons Promontory, the tip of southern Victoria. It could have been an anti-climactic finish, as Englisch struggled to get onto the foil with a quarter of a nautical mile to go. Fortunately, the wind gods smiled down on him.

“The wind picked up and we had this massive swell towards the point at Wilsons Promontory National Park. We absolutely flew in, so we finished on a high.”

Englisch’s family cheered him on as he came in at Tidal River. They had been worried that a shark would mistake him for a seal.

“It just felt incredible, I couldn’t believe it. I felt very lucky to experience that part of the world and create a world first,” Englisch said.

Unfortunately, English can’t claim a world record as his crossing was not validated by the appropriate authorities. But all that matters to Englisch is that he knows that he was the first, and looks forward to check out those who will follow.

“It’s my own world first,” he said. “I know that I’m the first one to do it. And I’m sure others will follow because it’s such a popular sport and growing in popularity every day.”

The feedback he received after the crossing has been humbling. Adventurers from all over the world congratulated him on this huge feat, including Justin Jones – the first person to kayak from Australia to New Zealand.

“I think they get the spirit of adventure because they love it. It’s not that often that you get a chance to do a world first. Australia’s got such a rich history around crossings and circumnavigations. We’re resilient.”

Englisch also set out on his adventure to attract donation to Waves of Wellness, “a mental health surf therapy charity, committed to changing lives by delivering for-purpose, innovative support programs”. Englisch has almost reached his $10,000 goal. The funds will go towards supporting 20 young people through an eight-week mental health surf therapy program. Wing foiling lifted Englisch up from his depression, and he hopes the healing power of the ocean can do the same for others.

“For me, the medicine is being in the ocean. [Waves of Wellness] seemed like a perfect alignment and they’re really progressive, especially for younger people. It’s a perfect way to help people, and I wish I had that when I was younger.”

I asked Englisch in jest if he would consider wing foiling from Melbourne to New Zealand, and to my surprise he said, “Yes.”

Compared to the 220km/118nm Bass Strait crossing with up to three metre swells, the trip across the ditch is 2000km/1079nm and can have up to eight metre swells.

“I don’t even know if it’s possible, but I’m definitely putting the feelers out,” he said.

He would also consider a non-stop Bass Strait crossing with no support boat, inspired by Nick Maloney. In 1998, Maloney became the first person to windsurf across Bass Strait, non-stop and unassisted, in 22 hours.

He is also back to filmmaking.

Englisch and his team are working on a documentary on the ‘Gone With The Wing’ crossing with the “amazing” content that they gathered over the four days. Englisch is grateful that as a filmmaker himself, he has the means to tell his story.

“For me it was trying to tell a story about how we can still have an impact to do cool stuff at  [my] age and we can all find our world first, hopefully.”

For more information on Gone With The Wing, see: https://gonewiththewing.com.au/

To donate to Waves of Wellness, see: https://waves-of-wellness.raisely.com/gone-with-the-wing