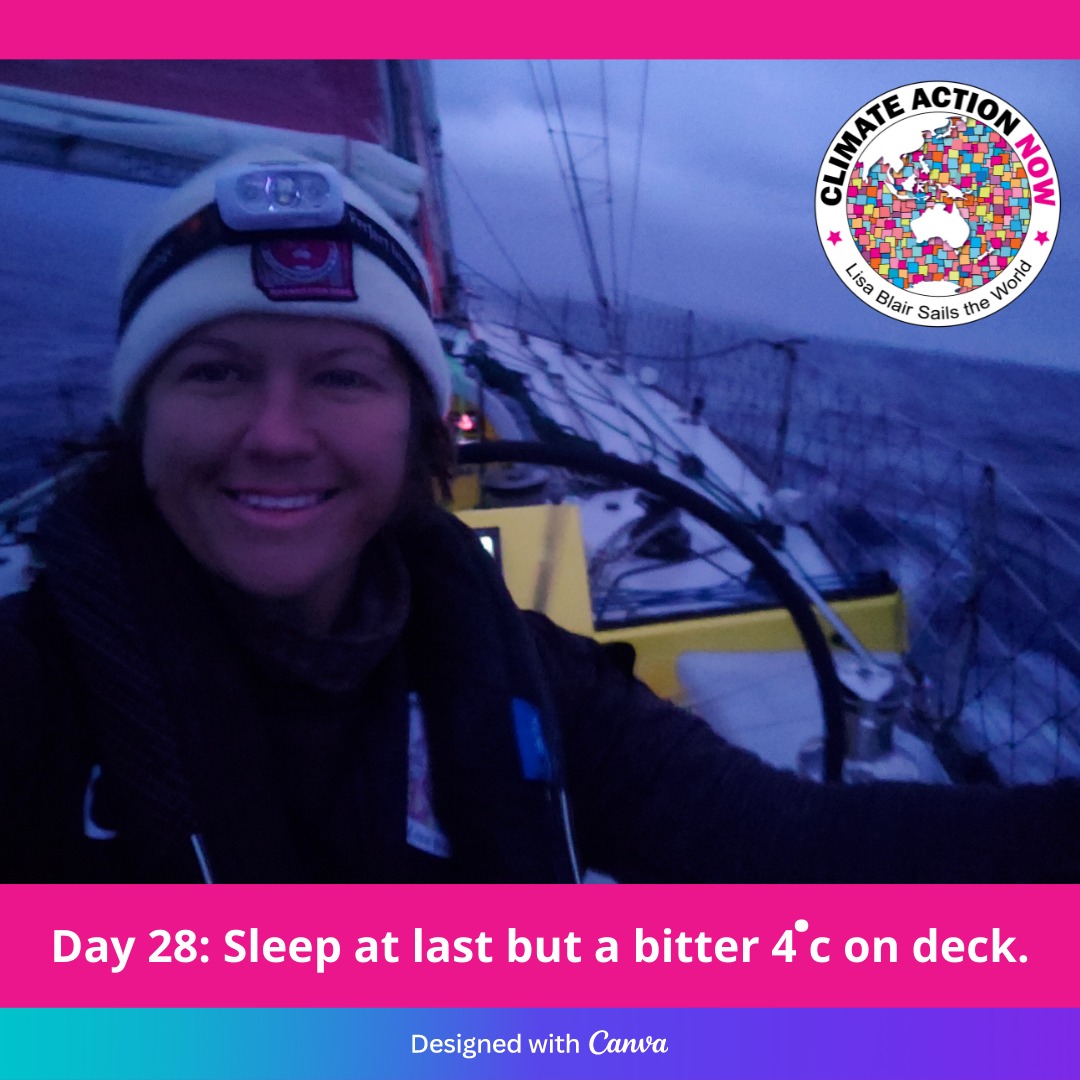 In her latest blog post, Blair gears up after some icy water splashes her while on deck.

Last night the conditions stabilized at 30 knots and I finally managed to get more than a few scattered hours of broken sleep. I am not rested by any means, but I am more awake than I have been in days.  I ended up sleeping until 1 pm as I still hadn’t gotten to bed until 3am and by the time I got up the winds had eased back to 20 knots so it was time for some more sail changes.

I was sailing still on the third reef in the mainsail and the Storm Jib but my speed was greatly diminished and as the winds weren’t really getting higher than the very rare 27 knot gust I opted to shake out to the 1st reef in the mainsail, I wasn’t quite comfortable with putting up more sails as the winds were still irregular and I may have found myself needing to put it right back in again.

Looking out the hatch I couldn’t really see any sea spray and feeling lazy I forgo the adding of my waterproof Musto outer layer and ended up climbing on deck wearing my thermals, vest, neck warmer and Beanie. As long as there was no splash I would be fine.

The seas were still large and the winds, while easing off were biting at four degrees and I was instantly chilled.  Jumping right in and setting up all the ropes to hoist the mainsail up to the first reef. All set, except that I needed to walk forward to the mast as I have some in-boom clutches to hold the reefing lines, I needed to open those before I could winch up the sail.

I transferred my tether to the outside jack stay; this is a line of webbing that runs the whole length of the decks and allows me to clip on and walk while still staying attached to the boat.  I walked up to the mast section and while I caught my balance on the rolling decks, I grabbed a hold of the rigging wire on the starboard side when out of nowhere, this awkward peak of a wave slapped against the hull in such a way as to leap over the decks and soak my right half. The water caught me from the hip down and then rushed down my legs and into my boot. It was like mother nature just wanted to remind me that it was cold out.

The iciness of the conditions was suddenly a whole lot colder, and I started shivering as I opened those clutches. I pushed through the pain and as fast as I could I hoisted the main sail up. By the time I climbed back inside my right foot was on fire, along with my hands. I grabbed a towel, took off my boots and ditched my wet socks in seconds before I had wrapped my feet in the towel. I sat in the galley curled up in a ball taking deep measured breaths, trying to breathe through the pain. Ten minutes later and I had thawed enough to think about putting new socks on and changing my boots over.

I have been itching to have a bucket bath for the last week and I am well overdue. Given that my base layers were so wet that I thought it would be best if I changed them. I decided to look at having a little bird bath inside in the heads (bathroom).  But just as I was starting to think about what I would need my alarm went off on my phone to tell me that it’s time to change the micro plastic sample over, so I shelved the idea.

Hitting pause on the bath idea I quickly grabbed my dry set of Dubarry boots and a clean set of Musto Socks and climbed into the sail locker and set about prepping the micro plastic sample over.

While changing over the samples the bicycle pump which is used to purge the system before opening the lid, snapped off at the fitting. Not ideal, but it did look repairable.  I finished changing the samples over and brought back the broken fitting to the main cabin. The cold was really starting to hit me by now, even inside the cabin.  My breath was fogging as I breathed, and the condensation was starting to develop on the walls.

I ended up deciding that its way too cold, even inside to have a bucket bath.  I will need to wait for some warmer conditions.

I finally dug out my Musto midlayer salopettes and Jacket and added these to my layers.  So at the moment I am now wearing the following Musto Gear:

Base layer,
Second base layer with body armour sown in and that protects my hips, elbows, knees and ribs if thrown across the boat.
Vest
Midlayer salopettes
Midlayer jacket
Neck warmer
Socks
Beanie
and more socks

Oh what a difference the mid layers make, even with wet base layers.  The Musto Midlayers have fleece on the inside, but a general-purpose water-repellent layer on the outside that doubles as a wind break.  Within minutes I was feeling warm again.

Now that I had missed any chance of a shower or bucket bath and daylight was fading I ducked up on deck to take a look around.  My hands that were still uncovered were on fire instantly.  I filmed today’s video update and then scampered back inside. I decided I wanted to make a hot dinner, so I ended up making a mac and cheese mix that I loaded with olives, corn, black beans for some protein and some sundried tomatoes. As soon as I was able to let it rest, I replaced the next micro plastic filter and then ummed and ahhed again about if I should go to the full mainsail.

The winds had now been less than 22 knots for the last few hours with a chunk of that at 15 knots.  I decided that speed was needed and got ready to go on deck but I couldn’t possibly think of enduring that cold on my hands again, so some common sense prevailed and I dug out some gloves to put on with dry hands (Note from Mum, FINALLY).

It was a lot harder to get the reef out with gloved hands, but they managed to remain blissfully unaware that we were out in 4 c temp conditions and remained toasty warm the whole time.  So, it looks like I might actually try to wear some gloves a little more often (Note from Mum YES!) and we are now going a little faster.

The conditions continued to ease but I didn’t want to put the No 1 Jib out because every now and again we get a good 22 or 25 knot gust come through with a grey cloud and I don’t want to risk breaking the sail in the dark. I climbed into my slightly warmer but still cold cabin. There is a storm due to tomorrow and I am ready to sign off.

Note from Mum – I just wanted to add to what Lisa has said. She has worked tirelessly on this project and it would be really sad to see her in debt at the end of it. Soooooo, I thought I would start a count down of degree sales required to cover outstanding accounts.

Also, what Lisa is doing is really is truly amazing. Although she has a strong support network of friends and family who are volunteering their time, she does not have, and has not got the budget for professional media and marketing. If you could share, write stories, contact news outlets and spread the word that would be so much help (I know many of you are already doing this).

I know from feedback that so many people wait anxiously everyday for the next blog, and get so much enjoyment out of living the trip alongside her. It is important that this opportunity is not missed simply because it was not known that it was happening.