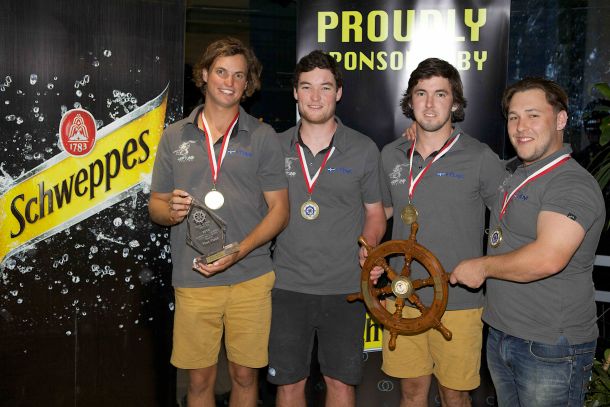 Sam Gilmour and his crew with the “Little Wheel”. Photo Bernie Kaaks.

Schweppes Little Wheel Regatta was set for a great showdown in the finals. A tight semi final between World No 14 Sam Gilmour and his younger brother Lachy required a third race decider to put Sam into the best-of-five final against 54th ranked Matt Jerwood, who finished on top of the leader board after a double round robin.

Weather on the Canning River was perfect. A shifty 15 knot south westerly made the BW8 yachts lively and often penalised heavily any skipper who elected to break away rather than cover to protect a lead.

After two races with the score locked at one apiece, Jerwood infringed at the second rounding of the top mark, handing the race to Gilmour after leading to that point. A desperate Jerwood now needed to find another gear and in race four, pulled steadily away from Gilmour, keeping a tight cover on his every move and creating a buffer of some five boat lengths on reaching the top mark for the final time. The stage was set for a thrilling fifth match when it all unravelled.

Electing to hoist the spinnaker before the two boats crossed in opposite directions with Gilmour yet to round the mark, the usually reliable Jerwood crew hoisted with a wine glass. Jerwood was able to keep clear while the crew dropped the kite in preparation for a second attempt, with the boat now almost stationary. The twist had not been cleared for the re-hoist and a gleeful and almost unbelieving Gilmour breezed past to open up a six length lead before the Jerwood boat finally started to follow.

The unlikely 3-1 victory was no indication of the closeness of the racing and it was an anti-climactic finish to what had been an exciting series which could have been won by any of the three top competitors.