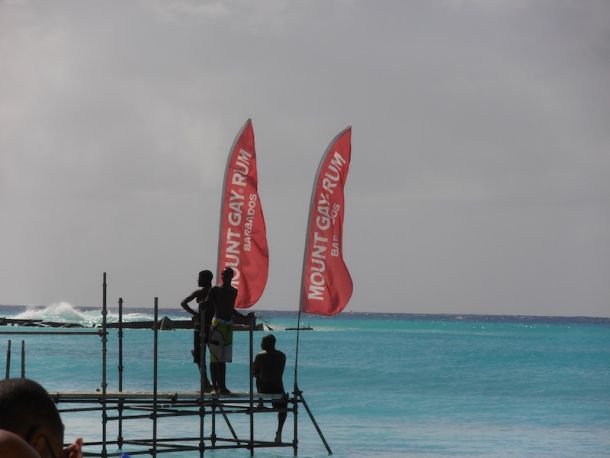 Bridgetown, Barbados (16 January, 2015): With teams continuing to arrive all day in time for the start of Mount Gay Round Barbados Race Series tomorrow, the Bajan party scene kicked off early this evening with a steel band and Mount Gay rum in full flow at the exotic beach location of Barbados Cruising Club.

Organised by Barbados Cruising Club in association with Barbados Tourism Marketing Incorporated, and Mount Gay, this event encompasses the already established Mount Gay Round Barbados Race plus a series of coastal races, and a final 300-mile sprint to Antigua starting on 24 January – to link up with the Superyacht Challenge.

The well-supported skippers’ briefing, held earlier in the evening, gave a good indication of the sort of series the race team has lined for the week. The aim, from the feedback received from the successful 2014 event, was to make subtle improvements. According to the race team, which includes Howard Palmer (Chairman of the Race Committee), Pat Bailey (Chief Judge), and John Coveney (Principal Race Officer), that is exactly what has happened.

Coveney said: “We are always keen to listen to what competitors have to say, so a lot of thought has been put into trying to make the courses more competitive. This has led to the possibility of the J/24 fleet having up to seven races, with a discard after four. And using the Trader Bank mark to the south of the course, will offer challenging beats for all classes concerned. As a team, we are looking forward getting the racing underway tomorrow, and running a successful, challenging and enjoyable event for all.”

One of the event’s main attractions for some of the big boats in particular is the 60-nautical mile Mount Gay Round Barbados Race on 21 January, in which there are 14 established records to be challenged, all of which offer the skipper’s weight in Mount Gay Extra Old Rum if broken.

Naturally the British VO70 Monster Project, which set a new absolute record in 2014 with a time of4 hours 42 minutes 28 seconds, is at the event to defend her title again this year, and hopefully beat her own time. There are however, some keen challengers including the local TP52 Conviction, and a couple of VO60s – Cuba Libre (which still has charter spaces available)and Ambersail from Lithuania.

Tomorrow’s forecast is for sun, sun and more sun, with good, consistent east north-east trade wind conditions between 11-15 knots. Looking ahead to the Round the Island Race next week it looks as though there could be a big shift to the north. Clint Brooks skipper of Conviction (TP52) says he is keeping his fingers crossed. “We are hoping for a decent northerly shift on Wednesday with a maximum of 18kts. It would be good for us, and would change the timings of arrivals at the finish hugely.”

All racing tomorrow will generally take place up west coast, with the first race for J/24s in Carlisle Bay off Bridgetown, starting at 1000. The starts for the rest of the fleets including Multihulls, Racing Class, Cruising Class and non-CSA Rated yachts commence at 1110.

Back on shore tomorrow, after a day of intense coastal racing, the warm Bajan hospitality continues with the ultimate Mount Gay Rum Red Cap party at Barbados Yacht Club, just a short stroll along the beach from Barbados Cruising Club.

About the Mount Gay Round Barbados Race Series

The first recorded race round Barbados was in 1936 when five trading schooners (Sea Fox, Mona Marie, Marion B Wolfe, Lucille Smith and Rhode Island) took up the challenge. Sea Fox (Captain Lou Kenedy) was the overall winner with a time of 10 hours 20 minutes.

The original race was based upon bragging rights for the fastest Trading Schooner. In an era where prices for cargo arriving ahead of rival ships commanded a massive premium, this was a lucrative race for captains.

The consolation prize of a barrel of Mount Gay Rum for the slowest yacht was discontinued several years later following the discovery that some competitors purposely stalled and remained out at sea for days to ensure they won the prize.

In 2012 The Mount Gay Round Barbados Race expanded to incorporate the Two Restaurants Race, which meant racing took place over two days. The idea proved such a success, it was decided to expand the event further in 2014, in line with most other Caribbean regattas, and run a series of coastal, round-the-buoy races including the Two Restaurants Race, and The Mount Gay Round Barbados Race. The 300-mile Ocean Race from Barbados to Antigua at the end of the regatta was specifically designed to tie in with the start of the Superyacht Challenge in Antigua.