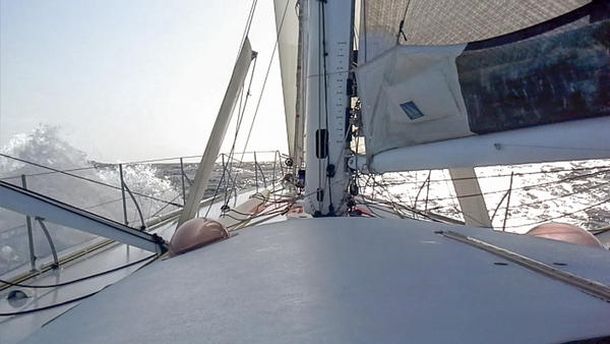 Primed and in pole position for the Southern Ocean, Cheminees Poujoulat and Neutrogrena had started to make fast speeds this morning but this Sunday afternoon both had slowed again slightly. But the forecasts for the two Barcelona World Race favourites indicate a fast passage, riding the leading edge of a low pressure system which see them at the longitude of the Cape of Good Hope in one week.

The twosome diverged momentarily today as soon when they were into the faster NNW'ly condititions, Guillermo Altadill and José Munoz on Neutrogena carried on south while Bernard Stamm and Jean Le Cam gybed east earlier and lead the Spanish-Chilean pair by about 22 miles.

Current routings for the near identical IMOCA 60s still have them still only two or three hours apart by the Cape of Good Hope. And if men and machines stay in near perfect order perhaps another round the world match race, of the same ilk as the last Vendee Globe when Armel Le Cléac'h and Francois Gabart duelled back and forth around the globe as if attached by elastic, might be on the cards. The two leaders were expected to be in 25-30kt NW'ly winds this evening, although breezes did appear gentler.

The chasing pair, third placed GAES Centros Auditivos and fourth placed Renault Captur need to do all they can to get a position on the same ride east. For Anna Corbella and Gérard Marin it should not be too difficult although their deficit to the leaders has doubled since yesterday, but for the RenaultCaptur,Jorg Riechers and Sébastien Audigane, who are short-cutting east across the high pressure ridge of lighter winds, Monday will be decisive. According to German co-skipper Riechers today he feels they have a fighting chance of catching the back of the same low pressure, but a lot will depend on just how slow they are crossing the worst of the ridge. He was in good spirits after he and Audigane had worked long and hard to repair their mainsail track which had pulled away from the mast at the second reef. Certainly, for the wind strengths they had, Renault Captur was back up to speed today

Also making repairs, or reinforcements to be exact, have been seventh placed Spirit of Hungary.Conrad Colman confirmed in his blog this morning that he and Hungarian skipper Nandor Fa had been laminating some reinforcements around the rudder mountings. But they have been making better average speeds in the SE'ly trade winds on the long, long close reach to the Saint Helena high. Colman – back in the Southern Hemisphere of his birth, as ever, is philosophical about being so far behind.

” Our slow passage through the doldrums has left us with a big mountain to climb. Our closest play mate, One Ocean One Planet, is over 700 miles away while the leaders are more than double that. It would be arrogant and disrespectful to the other competitors to say of course we can close this gap but we’ll keep plugging away with the competitive fires well stoked and hope to be able to chip away in the weeks, and months (!) that remain. We certainly deserve to have a few wind shifts go our way after the start we’ve had!”

Offshore, at the same latitude, We Are Water and One Planet One Ocean, 120 miles apart, are heading into new frontiers. All four skippers have sailed the Mini Transat to Salvador de Bahia in past years, but the South will be all new to the Garcia brothers, Bruno and Willy on We Are Water and Aleix Gelabert and Didac Costa on One Planet, One Ocean.

Skippers Quotes:
Aleix Gelabert (ESP) One Planet One Ocean: “We have about 15kts of wind, reaching.The conditions a really good. Last night we had a bit less temperature, and in the next days the temperatures will start coming down and so it will be a bit more comfortable.  From here we have not sailed before, for now it is into the unknown but we have done a lot of hours of training before we come down here so we know what we are going to find and we are prepared for sailing in these conditions. The  boat is practically sailing itself and so we have had time to rest and to be ready for the southern oceans. The boat is ready for anything, we are doing a little bit of maintenance. Then the Saint Helena high pressure does not look easy, we need to run the forecasts and to wait a little time before we decide which part we will cross exactly. We will see in the next days.”

Jorge Riechers (GER) Renault Captur: “We have easterly winds of about 15kts. We are quite happy that we repaired our mainsail track yestrday, so we are back on full mainsail since yesterday evening. So we try make up our deficit to the boats in front. We are pretty happy being fourth at the moment.  For the moment yes, there will be some light wind conditions tomorrow with a transition zone, and after that we should get straight to the southern ocean. But the boats ahead are going away with the conditions but I think it will be even harder for the boats behind. I would be happy to have been further west, I would rather be in the conditions off Cabo Frio. But with our crossing of the equator and the Doldrums in the east, our position here is a little bit freely defined so there is nothing we can do at the moment. The only thing we can do is go as fast as we can and hope and pray that the next transition zone will not be too big. Then we can be OK, and enter the southern ocean on the same weather syst em as the leading boats. They are in front of the low pressure system and we are on the back of the system. It can still be OK for us.”