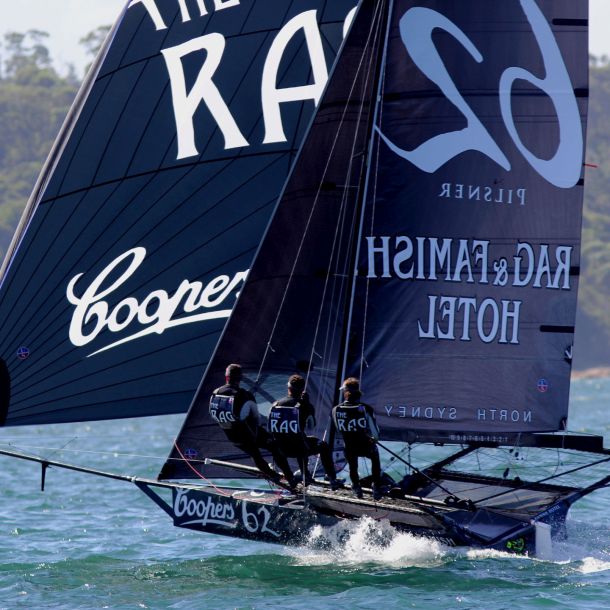 Coopers 62-Rag & Famish Hotel’s crew sailed a brilliant tactical race to score a stunning win in Race 2 of the NSW 18ft Skiff Championship on Sydney Harbour today. Jack Macartney, Peter Harris and Mark Kennedy were superb and their decision on the second windward leg from Robertson Point to Clarke Island sealed the victory. From that point The Rag increased her lead before scoring a 4m29s win from a fast finishing Lumix (Jonathan Whitty, Aron Everett, Daniel Nixon)

After the two races of the championship sailed to date, Mojo Wine leads on 4 points, from Coopers 62-Rag & Famish Hotel on 6, Thurlow Fisher Lawyers 7, Gotta Love It 7 on 8 and Lumix 9. Yandoo (John Winning) and Asko Appliances are sixth on 14 points.

The race was sailed in a light South-East breeze which tested all teams as being in the right place at the right time was critical at several times over the course.

The Rag team were aggressive from the start by sailing west of Shark Island while most of the fleet sailed the traditional course east of the island. It was a move which paid off when Coopers 62-Rag & Famish Hotel led by 15s from Lumix at the windward mark in Rose Bay.

The long spinnaker run from Rose Bay to Robertson Point saw several positional changes with the leading group spread wide across the harbour. Gotta Love It 7 grabbed the lead from The Rag midway down the run and looked set to lead at the bottom mark. Coopers 62-Rag & Famish fought back and led by 30s then took complete control when Macartney and his team elected to sail to Garden Island while the chasers tacked early into the middle of the course.

By the time the fleet reached the next windward  mark the race was as good as over when The Rag’s lead had extended to 1m45s from Mojo Wine and Lumix.

Coopers 62-Rag & Famish extended her lead to 2m30s over the following two legs of the course then pushed it out to 3m from Mojo Wine at Rose Bay the last time.

Most spectator interest focused on the battle behind The Rag as positions continually changed amongst the next five placings. Mojo Wine appeared to have second placing safely in her keeping but Lumix picked a better breeze over the concluding stages to narrowly get the points.

Race 3 of the NSW Championship will be sailed next Sunday.  The club’s regular ferry will follow the race, leaving Double Bay Wharf at 2.15pm. Race 4 will be sailed the following day (Australia Day) however a spectator ferry is not available.

There is an excellent video of action from earlier this season, which was put together by Oliver Hartas.  It’s well worth a look: